Somewhere between two and three years ago we produced a documentary called “The Gefilte fish Chronicles”, which you can learn about on our website whose URL is
www.gefiltefishchronicles.com. Soon after we completed the “Chronicles” video, I wrote a cookbook cleverly called “The Gefilte Fish Chronicles Companion Cookbook”. Or as I like to think of it, cooking from all the Brown food groups. So what does this have to do with the sad state of politics? Absolutely nothing—which is precisely why it’s important. 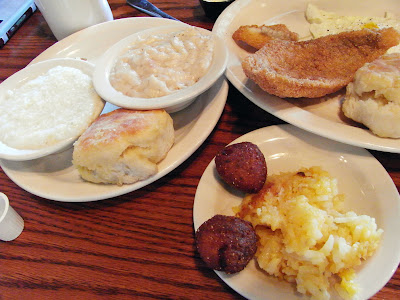 An actual meal ordered at Cracker Barrel (Sept. 2008): Fried Catfish with eggs, cheese hash browns, grits, biscuits & gravy, hush puppies, tartar sauce. We're not making this up.
What I have come to realize, in the past two days is that Obama can’t get beyond the Sarah Palin stuff because he is too self conscious about it. The truth is that when the Republicans say that asking Sarah questions, or even more importantly questioning her credentials is disrespectful, it is the most sexist action any guy can take. It’s like saying, “Don’t pick on the girl. Especially not one in glasses”. It’s so interesting to watch McCain put her out in front, like if a punch is going to get thrown, it won’t get thrown at the girl in the glasses.

Before I get back to the Brown food groups, I wanted to share a story. In 1992 we had a small but effective campaign that paralleled the official Clinton campaign. For lack of a better name we called ourselves the WAT squad—in response to Rich Bond’s speech at the Republican convention where he intimated that Democrats were not Americans. So our campaign was called ‘We’re Americans Too’. While the Clinton campaign was designed to tell the public why Clinton should be President, we concentrated on issues of character and pointed out why President Bush One, shouldn’t be President. Clinton fought back but we reinforced questions of character. I think I’ve mentioned this before. Anyway, we were quite successful and at one point President Bush (1) had conversation (on the 7pm news) with a person dressed as a very large chicken. The chicken was, at first, a comment on the President’s refusal to debate Governor Clinton— the chicken sent a message about courage. Then we transitioned to Pinocchios to send a message about the Truth, which indicated that you never knew which answer you would get from the Commander in Chief. There were also a host of other costumed characters or signs or t-shirts (like “Free Levi Johnston”) or banners (my personal favorite a 40’ banner that said “Pants on Fire”, which I still have) and much more humorous paraphernalia that sent messages about the economy, health care, education, etc. Among my favorite of all the events we coordinated was the Harry Truman Truth Squad, which usually consisted of 50-100 people simply holding a black and white mask of the former President’s face in front of their faces. Yes, it was eerie and very effective to see that many people in a silent vigil indicating that the truth was missing in whatever the President or Vice President said.

The other night I heard some pundits talking about the 1992 Clinton campaign. They were trying to figure out why that campaign was so successful. I was at home with David screaming at the TV “Because he had us!” Unfortunately, we are not part of the Obama effort. They could really us -- especially the Harry Truman Truth Squad to make a point about the lies and distortions the McCain campaign is using in commercials. I guess power does corrupt because there seems to be no limit to the level McCain will sink to win this election.

Beer is one of the brown food groups. There are others, all of which can be found at the Cracker Barrel restaurants. I guess this is a day for confessions because I am about to confess yet another secret. In my car there is a national Cracker Barrel map. This means that no matter where I am, I can see if it’s possible to be anywhere near brown food group heaven, and to be sent into brown food group ecstasy. There is absolutely nothing better than fried chicken, catfish, steak with mashed potatoes, macaroni and cheese, grits, biscuits and gravy, and eggs. Yes, all at the same time. (Oops, I left out hush puppies.) Sometimes I think that if I eat myself into a stupor, when I recover the politics won’t be as painful. Or I think I’ll just get in my car and drive to every Cracker Barrel in the country and by the time that’s completed another four years will have passed. And then I think, I can’t afford the gas—internal or external. We’re just sayin...Iris
Posted by Iris&David at 8:41 PM

I'm happy because I just read all the thoughts that are passing trough my mind!!!
Iris i applaud you, congrats