It's All About Point of View 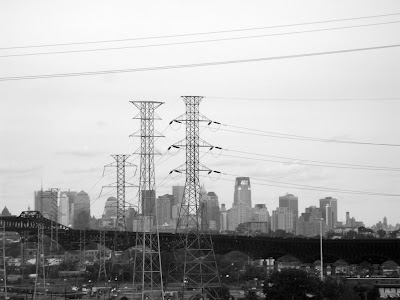 I'm driving into the City on the afternoon of 9/11. It’s something which makes you want to look up, and keep looking, until you see those familiar towers. There are all the docks and shipping areas of Jersey which kind of block the view, but you have this certain feeling that as soon as you clear the big Container cranes, you'll see the familiar tall thin towers looming on the edge of the city, inviting visitors as they have for almost four decades. Yet, they don't appear. I keep waiting, looking, trying to spy between the semi's and the bridges that sight which tells me my five hours from DC is almost over. It is said that the hardest thing to describe is something which isn't there. I agree. It'slike a 20 megaton version of that feeling you get when you realize you left your wallet in the phone booth, or your car keys on the MacDonald's counter. But this one is stronger, deeper, more frightening in its absence. 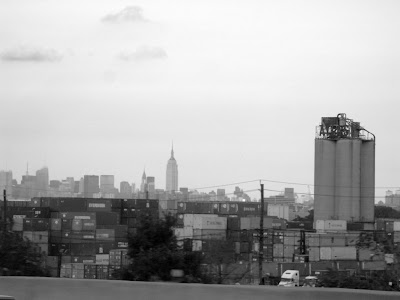 It's been seven years. Hard to believe we have lived that long without the towers, or even worse, perhaps, seven years of dread waiting for the next bulletin about the 'new' attack. The bad guys are surely trying to plot something, if only to baptize the next President next year. That seems to be how they do things – the first year of the new Regime. In many ways they have caused us to do to ourselves which they, even with their mightily leveraged asymmetrical attacks couldn't have done. They have installed fear as the one constant in American life. It rules everything, every judgment, every public policy, every minor activity that any of us takes part in. Can fear have been so strong in the dark days of 1942, when we had entered a war which we had no certainty of winning, and which was constantly serving up if not defeats, at least extremely costly battles. What did our folks think about the future then? Did they just feel like turning everything over to the Feds? Yes, there was rationing, and yes, there was a certain amount of censorship in a Press corps which did actually believe that winning the war was a good thing. But was the same deep, dark fear of the unknown, the kind of fear which has let Americans completely give up any sense of self worth and self assurance, so pervasive in the early uncertain days of WWII? I just don't know the answer, but what I do know is that in 2008 we are, from every level of government (and I mean every!) down to the man in the street, convinced that the only way to move forward is to move two steps back. Police patrols at the conventions would have been a bad joke if they we're so shameful. Bin Laden sits in his cave, picking his teeth with a hunting knife, no doubt watching on sat TV the overly intrusive so-called Security presence at both conventions, and must say to himself: Gee, I got way more than I bargained for.

We are not Captain James Lawrence - during the War of 1812. We seemingly HAVE given up the ship. We gave it up to fear.

I often think back to that afternoon in Yugoslavia, and wonder what our host, the coach, must think of the US today. Is there any sense of good will left, or have we just let it all die in a gigantic fit of bluster and hubris. I worry for our kids, and the world we leave to them. In 1946, with the war ended, and the beginning of the rebuilding of Europe and Japan at hand, I was born. That world was one of promise and hope, and of course Red Scares and Nuclear worry. But the dark days of fear and the unknown in 1942 had been vanquished, and the country was the one place where people everywhere wanted to be, live, enjoy. Now, as a parent in the post 9/11 world, I wish we'd done a better job of trying to set up the world we have control over for the next generation. Some days I think.. with Clinton born in August, '46, Bush born in July of '46, that I, as a child of September '46 ought to be the next President. One Dem, one Republican, one Independent. Would I be considered “qualified?” Maybe I'm too naïve when it comes to the level of self serving which politicians can be accused of. But beyond that, I have worked in 80 countries, have a working knowledge (eat, navigate, complain) in a couple of languages. I know that Russia is close to Alaska, but I know it because I've been in Russia. I suppose I could still be drafted, and if drafted I might serve. Maybe that could be the one thing that “everything changed at 9/11” would give back to the country which wouldn't be another step in toward the world of Fear. We're just sayin'....David 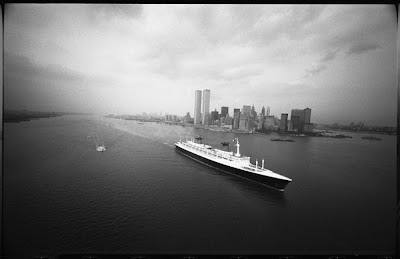 The World Trade Center, 1974
as always, click on an image to see it full size
Posted by Iris&David at 9:10 AM

In response to the question of whether the threats borne by WWII inculcated the same character of response as we now see in, for example, Guantanamo, I'd like to share a quote.

"To place a man in prison without charge, and without the judgment of his peers in a fair trial, is in the highest degree odious and the foundation of all totalitarian governments, whether Nazi or communist."

--Noam Chomsky quoting Winston Churchill, who was speaking on proposed efforts to institute preventive detention in Britain. The year was 1943, two years after The Blitz left 43,000 British civilians dead--a time when Britain's survival was, in Chomsky's words, "not obvious."

I forever regret having never gone atop the WTC on the two trips to NYC some years past. Didn't even shoot a picture of it..

I guess that makes some sort of a statement when you see something..shrug your shoulders, and take it for granted until you realize it's no longer there.

I know exactly what you mean.