Yesterday I was with a friend who works for a Democratic Senator. We were talking about the multitudes of crisis which face our country. And I was surprised when she confessed that until McCain (or whoever—probably not McCain) selected Sarah Palin as his running mate, she was not going to vote. So I guess you think that Sarah Palin being a woman made all the difference in the world and now she has had some kind of “kitbitka” (you remember that’s a word that means an old small Russian wagon but we thought it sounded like “a miraculous recovery” so we changed the definition) and she’s going to vote for the Republican ticket. Quite the contrary. She will vote for Obama because she will not vote for someone who believes in creationism, eliminating Roe vs. Wade, goes to a church where they speak in tongues, and shoots helpless animals for sport from a helicopter. She confessed, “I’m sorry to say that I don’t really like either candidate as a possible President. I simply don’t think either is prepared to be the leader we need today. But how, in this day and age can you vote for two people so out of touch with what’s going on in this country –culturally and technologically”.

Oy Vey! In Elizabeth Drew’s essay, “How John McCain lost me” she lists many reasons why she is no longer supporting her old friend. All the reasons are insightful, but I found this among the most interesting:
‘McCain's recent conduct of his campaign – his willingness to lie repeatedly (including in his acceptance speech) and to play Russian roulette with the Vice-Presidency, in order to fulfill his long-held ambition has reinforced my earlier, and growing, sense that John McCain is not a principled man. In fact, it's not clear who he is.’

When I read this kind of stuff I find it incredibly upsetting, so let’s talk about the Emmys and who was the Best and Worst Dressed. Now there’s something I can sink my teeth into. I do remember what some of them were wearing, now if only I could remember some of the names of the celebs. I'll try. I know there was a short dark haired woman who kept hiking up her dress, and I know that this same woman had to take a golf cart from the parking lot to the event because someone screwed up her limo. Can you imagine. It's your worst nightmare. And I know that sparkles, or maybe it’s sequins , no it’s metallic fabric is back in. But in my closet it never went out. Oh, and both the Daily Show and Colbert won because they are funny and in fact, they are the places where most people under thirty get their political news—papers, magazines, and TV news are just not cool, and too much work. Alex Baldwin is also Emmy award winning funny, but not in the same way. He's kind of mean funny -- but likeable. Mean appears to be the new nice. “Mad Men” was best drama, “30 Rock” was best comedy (but only on TV, in reality it’s just another GE media business.) And someone named Bryan won for something called “Breaking Bad”, which I’ve never seen. But then I’ve never seen “Lost” or “Gray’s Anatomy” or “Survivor”. I’m kind of a “Cold Case”, “Bones” and “House” girl. I wonder what that means?

That was a refreshing break from the hum drum of politics. So where were we. There is a PBS poll on the internet that asks if Sarah Palin is qualified. It will come as no surprise that the numbers suggest she is – or the Republican technology is better than the Democratic technology. But I love a good survey almost as much as a good piece of cake, or a vanilla malt, so I think I’ll spend most of my time exploring food instead of polls. John McCain has changed his mind several times about the bail out. Barack Obama has not really talked about it. Sarah Palin is cute, still has nice glasses and doesn’t ever leave the script. (Hey, Jordan is good at reading a script, so I guess she could be President). And Joe Biden is in some blue collar place probably yelling at someone with a blue collar. That pretty much brings us all up to date. Let’s talk about something far more interesting, like the wedding I went to this weekend. My niece Nora got married to a wonderful man named Brian who is a successful entrepreneur. 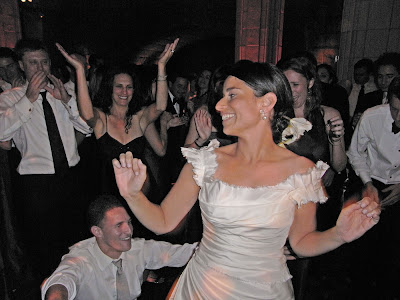 Thank God neither of them is employed by any stock related enterprise. She looked beautiful and they worship one another. 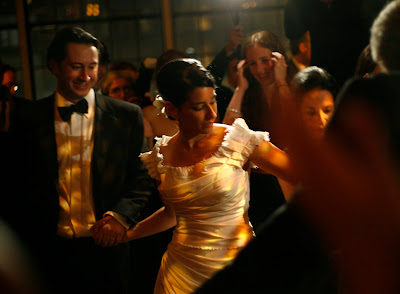 The wedding was in a lovely space, all redesigned to meet their needs and the food was both elegant and creative – my favorite was the NJ diner table at cocktails preceding the dinner. 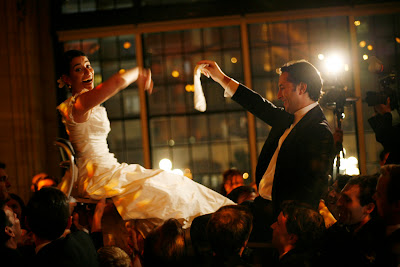 The bride wore white, the groom wore a tux and the bridesmaids were in black with every dress being different --one even sparkled. It was a refreshing break from talk of the financial crisis, the gas crisis, the housing crisis, the war, and the election. As I watched these two wonderful people share their vows, I couldn’t help but wonder what kind of a world they will grow old in and what the lives of their children would be. Then I thought—stop that foolish troublesome thinking and go get a piece of cake. We’re just sayin, Iris
Posted by Iris&David at 7:07 PM

We can only hope that more women are disgusted by McCain's choice than enthralled. I think it was a desperate, cynical, impulsive and dangerous move that, when we look back, will be seen as the beginning of the end for his White House hopes.

I love the way you weave stories into your blog.

Fascinating idea there ...Jordan For President! For convention purposes, what might her Party affiliation be?

Your idea does have merit though because even at her young age, Jordan has about as much national experience in these things as does Obama. (Yes, Palin too, but she's not running for president).

Can Belle be her VP nomination? Just think of all the perks we'de get!

Belle and Jordan-- an unbeatable combination. I'd not only run their campaign I would vote for them. And just think of the money we could raise if every event they did was some musical presentation. I'm loving this idea. They could toss for who gets to be President. The winner gets not to be.