So, while I sit in my wonderful room at the Oriental, in Bangkok, the hotel I wanted to stay in for years decades ago, but could never afford, I look around at how lovely it is, and think.. hmmm was it like this in the days before it became part of a big international chain? Fine silk everywhere. Rattan plates. Pretty dark wooden desk with fax machine hiding underneath. It’s a bit over the top, really…. I mean I love the greetings, hands together, gentle bow…. but if you don’t do it yourself, you feel a bit Awkward. You could never keep up. I mean, it’s like if a bunch of American diamond merchants were dealing with Japanese dealers, you would have all this bowing on one side, and the other guys would be trying to figure out when to bow, and to shake your head, when to just sit there and pretend you don’t want the diamonds so badly that you’ll overpay. At least that’s commerce. Here, it’s just getting into the hotel room.

But the place is quite sumptuous, and welcoming, even in the 90+ degree muggy heat. Bangkok remains one of those towns in which (unlike Washington) they can have a march on the State House (which they did Friday), get past the police barricades (which they did Friday), demand the Prime Minister sack his government (which they tried Friday but he didn’t sack anyone yet, except yell at the cops for letting them get so close), and still go out Friday night and have a beer and feel OK about things (which about 10 million Thais did Friday). Well, on Sunday, as if to remind everyone that it IS Sunday, they do a gigantic market, rather like our favorite place in the East Coast, Cowtown, New Jersey. 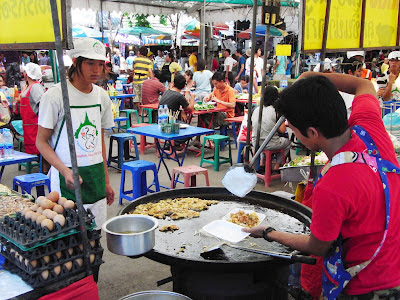 And like Cowtown, it has damn near anything you could want, if what you want is a bunch of cheap knock-offs, great food (street type food), and the occasional smell of fried garlic, doing its magic next to the place where they sell Hello Kitty stuff. 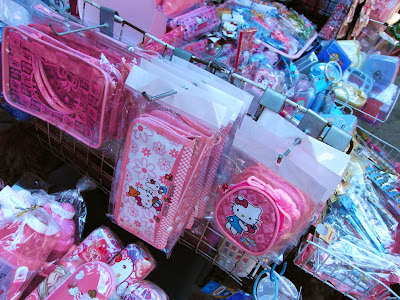 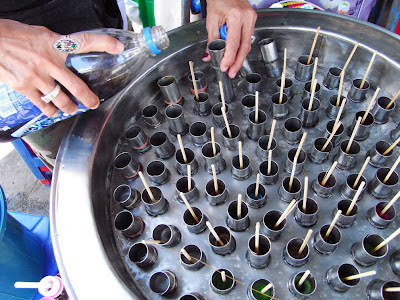 Cowtown, of course has our favorite mid Atlantic stand… the famous steak/cheese sandwich place at which Andy rules.. (I forgot the name of the place but Andy does run it). Here, it’s a Thai flair to it but much the same. The Thais are snackers. Juices. Mushed up fruit over ice. Fresh fruit.

Ice Cream (coconut!) Grilled fish and meats and lots of shoots. They never stop fressing. Some of the stuff is what you would have to call “Unapproved OSHA” .. like the puppies, and birds in cages. But there are some great little numbers you don’t have even in Cowtown: the mask booth.. they have em all:
Saddam, Bush, Osama… the list goes on. You could pretty much have a meeting of the Security Council with those masks. Not that you could pass a resolution. No way, but you might just get Osama and Bush to share a bowl of Ice Cream. That might be just the trick to getting everyone to chill a little bit. 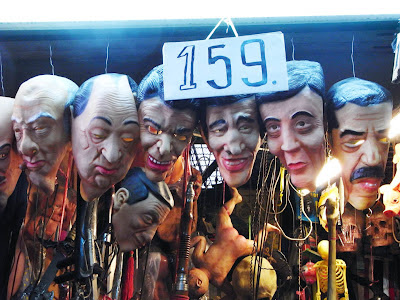 One thing they have added since my last trip to BKK is a pay-to-use Super Express way. It loops, almost beltway like, around the city, and if you re willing to pony up 40 baht, (a buck and a half) you can miss about 90% of the traffic. 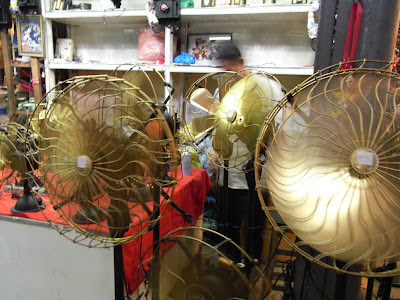 It almost seems like the Congestion Pricing they were trying to adopt in New York City (pay $8 a car to go below 66 th street) which I felt was rather elitist (hey, what in New York ISN’T elitist?) but here, when you wanna get somewhere, it sure can make a difference. Until another 10000 People decide they too wanna spend the money. Then you’re back where you started. 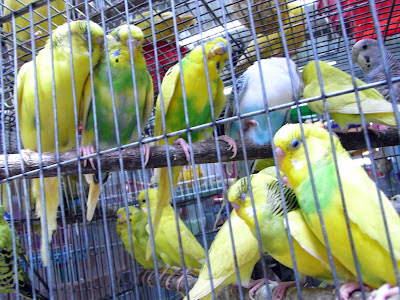 Speaking of which. I have to go grab a cab to the airport, which will lead me to Cambodia for a day or so. More as we keep moving along on this mini caravan. Meanwhile, who ordered the Pad Thai with Iced Coffee? 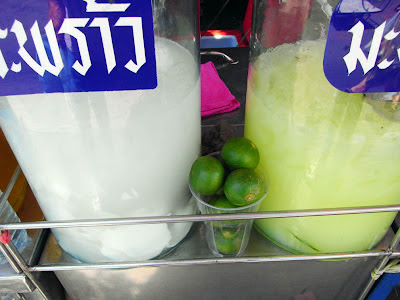