Sometimes things just lay themselves before in ways you cannot imagine ahead of time. Sunday, Fathers’ Day, I spent some time at the Vietnam Memorial Wall in Washington. Well, as it happened, I hopped on a plane Monday morning, sat back for twenty six (yes, 26!) hours, and arrived Tuesday evening (you lose a day over the In’tl Date Line) in Saigon at Tan Son Nhat (don’t ask my why, the old “Nhut” is now “Nhat”) airport. Same part of town, same runways, but oh my, what a new facility. The Japanese (who provided me with my first taste of sushi in Saigon in 1970) have built a state-of-the art airport, the envy of any in Charlotte, Minneapolis, or Portland. In deplaning, you don’t even get hit by the wall of humidity until you are well into the ALL PASSPORT Immigration area. Lines snaked through the glass portals, where almost smiling officers stamped passports and pretended not to give a damn you were there (gee, maybe that part of the Advisory team, 1964-1975 really took hold!) Of course, when you see the folks in green uniforms with red stars all over, reminescent of those first color pictures Marc Riboud shot in the early 70s…you’re tempted to want to imitate Dave Kennerly.. as he did when arriving in Hanoi in the first prisoner exchanges of 1973: stepping off the plane at the Hanoi airport, he looked around and chimed in “beacoup VC!!”, the always present panic phrase elicited when the shit hit the fan in a battle somewhere. Well, there may be Beaucoup VC here, but the place is morphing into something even the Politburo probably could never imagine. Within this governmental structure (and let’s face it, all people in all countries, everywhere—and I m sure the new Mars probe will confirm this – hate the people who govern them), there are still amazing bits of individual “free marketeering” going on every direction you look.

In the cab to town, at 11:30 (I was about the last person to get my baggage in the spanking new facility.. oh me of little faith…), the darkness enveloped the city in a way which made it look its most romantic. The former “Off Limits” road which was lined with Massage Parlours, across from the main gate, is now a big series of office buildings. You could possibly get a massage there, but more likely you could arrange a contract with a Vietnamese business man to make 15,000 golf shirts at prices competitive with Bangladesh or China. It’s “time to move on” at its most emphatic.

The Vietnamese, having faced (as we were always reminded in the 70s) the Chinese for a thousand years, the French for a hundred years, and the Americans for ten years (here, it was called the American War- they were already IN Vietnam…) have decided as a people to move ahead and forward in a way that would be incredibly helpful for those of us at home who still feel some kind of need to keep fighting the 'last' war. Our warriors of this “last war” are all in their 50s, 60s, and some in their 70s, and I guess it is beyond hope to wish that each and every one of them could make the pilgrimage back here to see what has happened to this amazing place. After the difficult days of ’75 and beyond, the ignominy of our badly handled departure (remember Hugh Van Es’ picture of the crowds on the apartment roof trying to make that last chopper?) has resonated for the past two generations, and clearly has an impact on thinking about Iraq, and what is happening there now.

But were you to talk to Vietnamese, I suspect you would find they are well beyond the question of which system of government should try and rule. Not rule, but “try” and rule. They realized, especially the younger generation, that the world is in front of them, and they had the choice to either watch it pass or grab on for the ride. And boy, did they grab on. It’s amazing to see how the place has changed. The names of roads and streets have changed, but looking out my window at the Continental Palace, I see a façade I easily recognize. No cross dressing hustlers on the terrace, propositioning young off duty sailors for that singular ‘good time.’ Otherwise, quite the same place. Attitudes can change, and even watching the folks in the line next to me, I saw my own change. A Vietnamese family, mom, dad, four kids (13, 12, twins 8?) were handing the passports over to the agent, all deep blue U S A Passports. They are the new Americans. Probably here to see family, acquaint the kids with what in my family would have been Minsk or Bialystok. I certainly wish there had been a chance when I was 13 to visit Poland and Belarus, and see the old village where Grandpa Nathan and the Burnetts all came from. These kids do it while playing on their Game-boys. 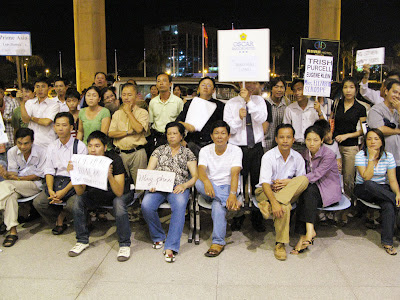 Outside baggage claim (yes I WAS the last one of 400 to get my bag), I was reminded how Airport Greeting is still one of the grand past times in countries who are at the same time, catching up, and excelling at the new technology. Still, a family member coming from the US, is a big deal. They are greeted, invited into the 8 passenger van, and driven back to Phan Rang (a town up the coat a hundred miles or so). I was only there once, to see some F-4 Phantoms.. our fastest attack plane of the 70s. To me Phan Rang didn’t mean Uncle Tai or Auntie Nga: it meant only a place where Yanks from Vermont and Illinois kept jet fighters loaded with ordnance to be dropped on the near by hills. Ill bet those guys from Vermont would love to grab a bowl of noodles in Phan Rang today, if only we could get them here. 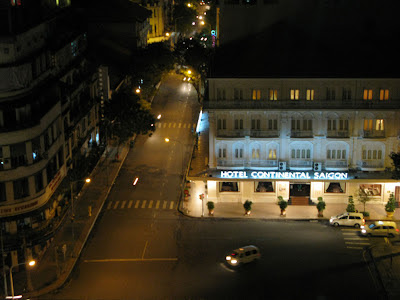 My cabbie was younger than 30 I surmised: a part of the post war generation. He is a member of the Vietnamese Baby Boomer generation. He may have heard stories from family about the ‘war.’ But he is hustling for taxi fares, hoping for a nice tip. And though his English is about as good as my Vietnamese, we connect, boomer to boomer. In the Caravelle Hotel (now a Sheraton) on the square just a few meters from where I lived for a year, and in whose then less august chambers I first met Larry Burrows, October 14, 1970, the day I arrived here. In his slightly more cramped (as I remember it) room, there was the utilitarian array of bed, chair, and drinking water. No electric tea maker, no cable tv, no international direct dial phones, no internet, and no Rubber Duckies. 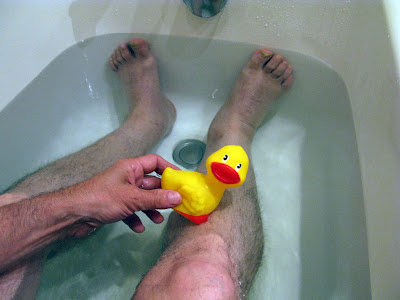 Did you tell John McCain you were visiting Vietnam right after visiting his campaign?

Talk about living in the past!

I hope that ducky doesnt get the infamous Burnett toe fungus...

Have fun in the new world.

Pho till you go!

aha! I finally have the duckie just where I want him.. wandering in the salton sea of southern indochina... unaware that he is about to dash himself upon the rocks.. hehe.. yes yes.. duckie, just float along.. everything is cool, everything is fine.. and then BAM! A toenail fungus hit in the starboard beam, like he's never seen before... and voila.. I will OWN that little duckie, Duckie! DB's TNF

David, engaging story about Vietnam. Iris, I am so sorry about Stewart. I know you hated not to see him again, but you know he loved you.