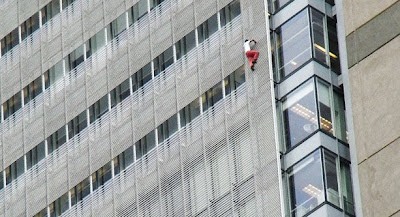 Who doesn’t remember that famous quatrain off the 50s?
“Look, up in the air!”
“It’s a bird!”
“It’s a Plane!”
“It’s Superman!” … that strange visitor from another planet.. yada yada yada. 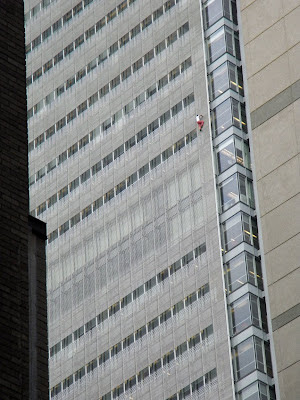 Well, I actually had one of those moments this afternoon. I’d left the Contact office on West 38th street, headed by foot to the E train on 40th st. Just after crossing onto 39th st., there was a small crowd gathered, heads all cranked up, with perhaps ½ of them pointing up to the sky. In a city where airplanes have been known to fall from the sky, that kind of intense attitude is full of foreboding when you don’t really know the source. After a minute or so, and having started to pick up the voice-over commentary (no one offers unsolicited commentary like a New Yorker!) we realized it wasn’t really anything to worry about so much as to enjoy. A young (presumably.. since the best ones are) French climber, had started to climb up the side panels of the brand spanking new metallic wonder on 41st street, the New York Times’ brand new headquarters building. Once you had your focus you could see a small figure 30+ stories up, doing a calculated and methodical hand over hand climb. Apparently earlier in the day another French guy had done the same thing, in an effort to bring attention to Global Warming. Per the usual drill, the guy reached the top, was arrested for Trespassing (the morning version unfurled a banner, the PM one did not) and taken off by police. The astonishing thing was that the whole of 8th Avenue was closed due to the huge influx of cops and firemen. Lots of guys, mostly looking clueless, running around with walkie talkies. A few people with Megaphones imploring the gathered multitudes to leave a path on the sidewalk so people can get to their bus.. (one passerby muttered “.. .and yes, some of us don’t give a fuck…”) It was a real New York happening. One of the interesting things was that there was clearly zero threat to anyone, unless you were standing right UNDER the guy, and he fell on you from 40 stories. But otherwise, it was all spectacle, no worries, and yet as usual the cops felt a need to be in ‘control’, emptying the street in front of the building (at 6pm Rush Hour!) of all vehicles and people. 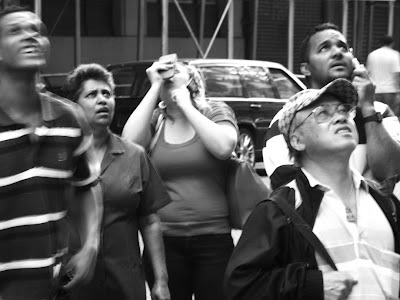 Not that I wanted to see five thousand folks start to chant “Jump!, Jump!, Jump!” It wasn’t really that kind of crowd. They were interested, and everyone was either ON the (cell) phone, or taking pictures & movies with one. I mean, it was like a Finish Line scrum at the Olympic Track and Field meets. 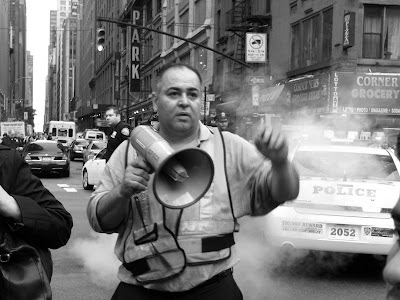 Heads cranked high, mostly graced with smiles, that kind of “geez, what a frickin’ nut, but I sure DO love New York” smile. The kind that reminds you that a lot of the stuff that happens here, not only stays here, it just flat out won’t exist anywhere else.

But after about twenty minutes, when success was in sight, the crowd burst into laudatory applause. It was quite moving. In the city of 8000000 stories, here was one we all shared, we all wanted him to make it, and stand triumphantly at the pinnacle. Well yes, of course he made it, but the triumph was shortlived as he was immediately taken into custody. I’m sure, however, that I wasn’t the only one who was ready to put his little camera (mine: a wonderful Ricoh R8, 10 megapx, keepOnYourBeltAtAllTimes jewel of a camera) on “Video” mode in case he had taken a misstep. It was no less exciting that he actually made it in one piece to the top. These are the kind of little New York moments that remind you why you dig this place. So the next time you hear someone yell “Look, up in the sky…” be sure to look because even when you think you know what your day is going to be like, it could just that fast turn into another New York moment. We’re just sayin…David
This shot of Steve Dupont, who just arrived yesterday from Sydney and wandered over to the TIMES with me, is one which proves again the amazing quality of my little Ricoh R8 (10megapxl, $350, and wow, what results.. usually they 're even Sharp!) 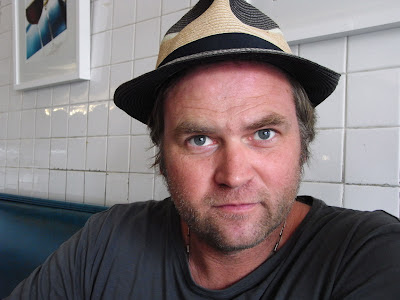 At least there are people who have gotten to the top of the New York Times to survey the situation.

One heck of a way to get around security at the front desk. HA!

You sure it wasn't Joe McNally trying to change a light bulb?