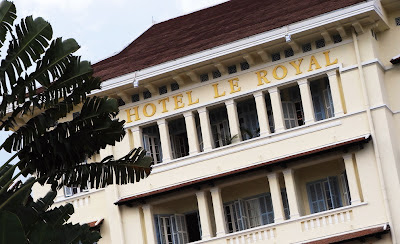 It was for decades known as Le Royal. Seat of the unelected bar-hopping government, the prime members of the fourth Estate (or at the least, those with flair and style), and home of the best wines in town. Then, after the deposing of the King, the royal nomenclature was withdrawn for two generations. It became simply Le Phnom. Not a name that rolls of the tongue, but one which carried a lot of significance. In the heart of the Cambodian Capital, this old colonial relic of a hotel, with a broad elegant swimming pool, and arched window views of the gardens, maintained its dignity even when the Khmer Rouge stole the soul of the Cambodian people. It is difficult to do the math, and realize that it has been 37 years since General Lon Nol swept Prince Sihanouk out of town and out of office, and with American support, tried miserably to win back his country from the rebels. In today’s parlance the Khmer Rouge might just be called ‘insurgents’ or ‘rebels’ but they really were the ‘bad guys’ who were always spoken about in the third person. As in: “watch that road to Takeo.. beaucoup bad guys…” Matt Franjola, who spent years there, told me once that you really had to watch out for the guys with AK-47s whose toes were splayed, maybe a ½” between each toe: a sign they had never known a pair of shoes. Hard core. And only when the Khmer Rouge finally took the country by force, days before Saigon fell to the Vietcong in 1975, did the world see just how bad they really were. Whatever your politics, whatever your view of the “lumpenproletariat” vs the “bourgeousie”, there just cannot be any excuse for killing three million of your own people. It cannot matter that you might have formed your ideas in Zurich at the same lakeside café that Lenin had envisioned the Soviet State two generations before. There was just no excuse.

So returning for 24 hours to Phnom Penh (like many of the amazing and interesting places I have visited in the 80 countries I have worked.. I just haven’t returned… Yet) this weekend was a mix of anticipation and wonder. 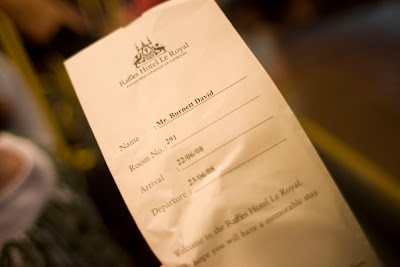 Wonder, to see what has transpired in the 36 years since my last visit. Anticipation and hope that things might have improved for the long suffering Cambodian people. I flew in from Bangkok last night, and arrived at Le Royal (now the Royal Raffles, having been rejuvenated by the Raffles chain in Singapore, and to a tea, I might add) just as dark was arriving. 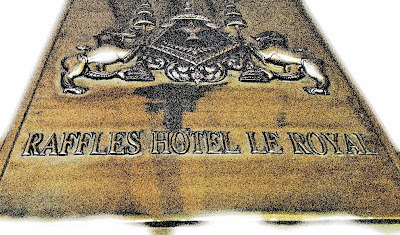 So all the things you see in daylight were obscured in the sweeping shadows of trees, bushes, and overhanging roof. Yet, the pool was stil in the same place; it was the structures which had moved. Or more precisely, been added to. In 1971 the lawn around the pool was vast and inviting, studded with umbrella protected lawn chairs, and signs of ‘citron-pressés’ in various stages of sip. Journalists in particular loved the place, because it was not only close to the PTT Telegraph office, to send dispatches, but it was really close to the bar and the pool. If you didn’t have a beer or gin-tonic next to your Olivetti typewriter, you clearly weren’t meant to be covering the Cambodian conflict. Robin Mannock, a stocky yet highly mobile Brit, who was for years the AP correspondent, had a small suite of rooms which gave directly onto the grassy side of the pool. There was really no differentiation between “bureau” and “bar,” and he loved that everyone loved it that way. 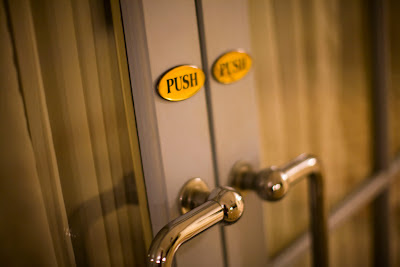 Compared to the war across the border in Vietnam, the fighting in Cambodia was much more difficult and dangerous to cover. In Vietnam, it was easy to join up with a unit, feel a certain protection from being with them (yes, I suppose it was an “embed”, but thankfully that awful term hadn’t been invented yet). In Cambodia, the government forces were woefully underskilled compared to the Khmer Rouge, and often the not so capable troops could be seen trucking to the next battle station, with their families in tow, to cook and provide the comforts of home. It may have had a certain 18th century quaintness, but it was quite the recipe for disaster. This left the journos more or less on their on, then, to try and cover a bloody rural conflict with very few set lines of demarcation. It was dangerous in the extreme, carloads of writers and photogs, heading out to the front in old Chevy’s or sometimes on motorbike, in search of bang bang. Too often, as was the case in April of 1970, they got way more than they bargained for. Some thirty writers, correspondents and photographers disappeared on those roads in just a couple of months, among them Gilles Caron, the wonderful young Frenchman who had been one of the co-founders of Gamma. I came to work for Gamma in 1973, and Gilles’ legend as a “be everywhere, and be there well” kind of guy had long since been established. Sadly, his body of work became frozen in time when he disappeared on a drive out of Phnom Penh in search of the story. (Gilles’ work is still distributed by Contact, and the longer time puts between those pictures and today, the stronger they seem.)

In my two brief trips to Cambodia, I came to dread those country rides. I don’t know why we somehow felt immune, that it wouldn’t be ‘our turn’ to be taken by the Khmer Rouge, but still we piled into those old cars and headed into the countryside. A mostly rural country to begin with, Cambodia was dotted with hundreds of small villages. Riding through them you would often see young children waving, screaming at the passing presence of a big car. It could be very animated. Yet, and almost without warning, you could find yourself passing a lush field of green which had fallen suddenly into total silence. Those were the moments abject fear and terror. As if even the birds and small animals knew something sinister was nearby. It was as unpredictable as it was jolting. I had the good fortune never to see a bunch of armed men leap onto the road and stop the car. Yet, you could almost feel the presence of evil nearby, even if it remained unseen. The great irony, perhaps, of Cambodia was that the people were inclined to be incredibly gentle and hospitable. They could be terrors once angered, but it took some doing to get there. They made, generally speaking, for very bad combatants. And so when the country descended into chaos and genocide in 1975, it seemed so absolutely unjust. 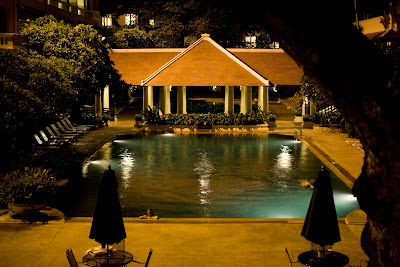 I realize that more and more I find myself playing the role of the “old fart”.. the guy who actually was IN a place when news was being made, a dozen, twenty, thirty or more years ago. I don’t feel like an old fart, for to me those moments where journalism and life intersected mostly seem like they could have happened last week. In Bangkok this week, one is reminded constantly of the revered presence of the Thai King Bhumibol. He was crowned in 1946, the year I was born. Yet, almost as if it were yesterday I remember my very first time carrying a camera to the White House, under the tutelage of TIME’s Wally Bennett. He had taken me under his wing for the summer of 1967 when I, as a summer intern, was sent to DC to learn the ways of Washington. Wally stood on no ceremony: he took me to the Hill, got me accredited at the Senate Gallery, showed me around, and in July of that summer, took me as his “second man” to cover Lyndon Johnson hosting the Thai King in a south lawn State Arrival. I remember how helpless I felt (and still do) watching Johnson escort the King from the podium past the military band to “troup the line.” I watched, and shot frame after frame of badly composed, out of focus images. Happily it wasn’t the Report Card by which my stay in DC 41 summers ago was judged, and even though my pictures were iffy, my memory of that day is quite clear. So, in an almost volunteer way, you become the old fart. You are the one link amongst the youthful colleagues, with the past. You actually SAW Lyndon Johnson. You actually went to the refugee camps for the Killing Fields in Thailand. You were present on that road near Trang Bang where Kim Phuc and her brothers were burned by the napalm strike. Of course we have footage and pictures of these things and maybe they give a more dispassionate view of those snippets of history. But it’s difficult for me to keep my mouth shut when such strong memories of my own come surging back. In January of 1971, during one of those quick trips to Phnom Penh, I was having a citron pressé at the Royal Pool. Silvana Foa, a newly dispatched UPI correspondent, who stayed on for years in Cambodia, was recounting a battle we’d heard about that morning, where the Cambodian army had fared rather badly. I remember her utterance, “The poor bastards… they didn’t really have a chance,” as if it happened this morning. There was a glum quality of acceptance to what was happening in her tone. It was almost like we knew something terrible would be the consequence, yet we were powerless to do anything about it. 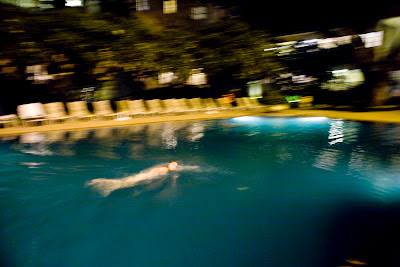 Walking into Le Royal Raffles this week took me back to that place in ’71 where we were trying to make sense of a country in the middle of a crummy war. And for those caught in the middle it wasn’t a crummy little war, it was their lives. Yet the sparkle of the hotel, and the vivacious spirit of street life in Phnom Penh today made me feel that perhaps the circle does close sometimes. 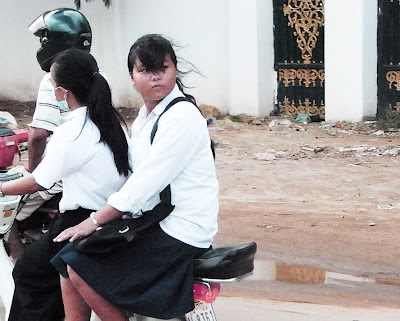 A pair of young women on motorbike
Cambodia remains a poor country, plagued by many of the economic problems which slowly developing countries face, especially in the era of $135 oil. But the spark in the eyes of the Cambodians I met, and the kids in particular, gives me hope to think that maybe even the years of the Killing Fields can be put away. 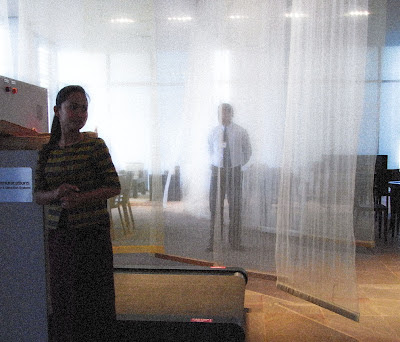 Security at Phnom Penh airport
The Royal itself is like a little souvenir. 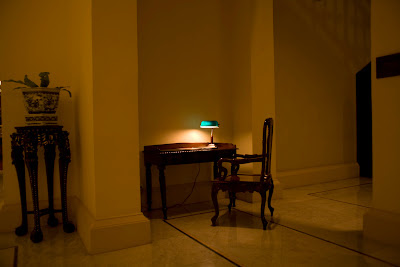 The manicured pool and lawns (Robin Mannock’s room is still there, but no teletypes rattle there anymore), the haunting green lamp of a writing desk, the Writer’s Bar, 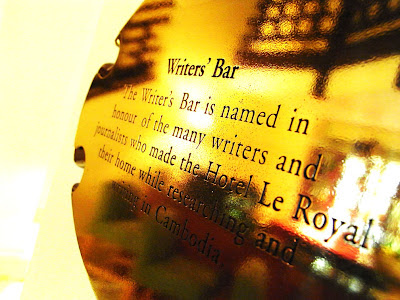 dedicated to those who wrote about Indochina over the years, they are all part of a heritage of what was. What it will be, we only hope for. 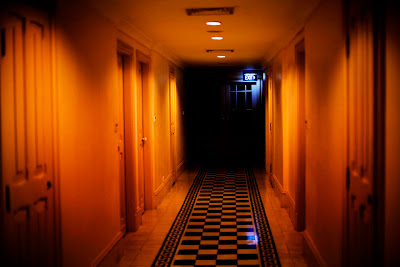 The hallway of # 291
And for me, there is simply sadness that Gilles and the others who disappeared that spring can’t be here to see the joyful smile in the face of one Cambodian child. We’re just sayin’… David
Posted by Iris&David at 3:11 AM