There are new statistics that reveal women are not living as long as their mothers. Is it any wonder with all the tumult in our daily lives. Along with breast cancer, heart problems, obesity and strokes, we suffer from a disease I like to call ‘I’mperfection’. You may think you’ve never heard of it, but that’s because it is often so deeply ingrained in our whole person, that it should be considered a ‘hidden killer’.

Regardless of age, race, size or education, it is impossible to have a conversation with any woman without discussing how to be ‘better’ or how to be ‘perfect’. Women all over the country are struggling to look like Gwyneth Paltrow or Halli Berry, aspiring to make a bed like Martha Stewart, have a career like Oprah Winfrey, and magically acquire the insights of a Dr. Phil. It seems that everything we do needs to be immediate, accelerated, and perfect. Our history, circumstances, genetics, the TV shows we watch, the magazines we read and the people who have become our role models, have led a new women’s movement based on an endless search for perfection. Ironically, we want a shortcut to the road of perfection despite the fact that, almost without exception, we agree that perfection doesn’t exist. So how do you cure something that doesn’t exist? Aye, there’s the rub (I agree, most pirates do not suffer from this affliction, they have other problems).

As if this is not bad enough, in my family we have an additional condition. It’s called, “nothing is too much for me.” This disease is a combination of, ‘I can never say no’ and ‘no one will be able to do what I can do.’ In other words, we have expectations of what we can physically and emotionally achieve, that may be impossible but are certainly exhausting. And we are not always wrong about our capabilities. I remember when I was in India producing the world premieres of the film ‘Gandhi.’ Included in my responsibilities was to coordinate all the invitations, design the look of two theaters (from lighting to tea at intermission), be the press secretary, (coordinate press parties and two press premieres, handle VIP’s, work on visas for the cast, provide logistics for all the celebrities and guests including cars and hotel accommodations, throw an after-party, deal with the diplomatic community and Prime Minister Gandhi’s needs, work with the director... you get the picture. We were a staff of four. I was in charge of the other three inexperienced people. There was a 12 hour time difference to NY so any Columbia Pictures decision making was impossible. I worked 24/7 non stop for three weeks. When my boss arrived (we were subcontracted to Columbia Pictures) he never said a nice word about anything I had accomplished, but rather complained about the fact that I was not nice to some little twit who we were paying, but she never even came to New Delhi to work—that’s where the premiere was. He was an absolute ass, but still he took me to task. In his rant he said “you think you can’t be replaced. You think you’re one of a kind.” He was right. I did think that ... and I was right. Oh maybe someone could have completed the tasks but the only people who could have done what I did with the limitations we had, were my cousins. The disease we have is genetic—passed down from generation to generation of zany women. Hopefully, some brilliant therapist will find a cure before our daughters are equally debillitated by it.

This week, as we celebrated Passover and watched “The Gefilte Fish Chronicles” in real life... I don’t mean to be cute here, we hocked and shopped and chopped and baked and set the tables, and did whatever needed to be done in order to host over seventy people the first night and over twenty the second. You don’t get much realer than that. 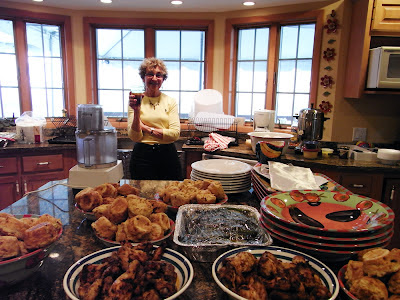 Rosalie and the Pesach 'spread'
Anyway, my incredible cousins, Rosalie (she hosts the events with her adorable husband Dick) and Honey, completed the Herculean task of getting everything done. I participated, but not like they did. (Which my aunt Peppy mentioned any number of times—she had to, my mother wasn’t there.) It was while watching the dynamic duo that I realized they we were suffering from the “nothing’s too much for me” syndrome. And nothing is too much for them or for me, so we continue to do stuff for friends, kids, parents, family members, whomever asks, until we are ready to drop. 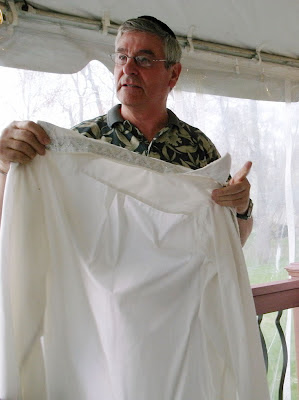 Dickie, leads the service
Is it possible to get beyond wanting (not having) to be a super everything? I guess when you’re dead. (Yech!! I didn’t mean to be unpleasant.) But up until that point a change in the way one operates, is not likely to happen. However, we do not have to despair. Being I’mperfect is a bit tedious, but not a life threatening ailment. You just have to take a breath, separate the word, and acknowledge that although “I’m perfect” most of the time, it is just as OK to be imperfect the rest of the time. We’re just sayin...Iris
Posted by Iris&David at 11:23 PM

Quite often..maybe, say 99.99% of the time..you ARE absolutely correct in knowing what your job is, and acting accordingly. It's been my experience that those who rant and rave at employees ussually are ignorant of the job at hand..or just plain jealous; Been there,heard that..Was it MY fault an editor is behind a desk on his behind as I went off to Europe?? You would think so.

Oh, well. That was 1984, but the memory remained.Unfortunately, many of those types do, also.

And besides,at the risk of sounding as a popular hotel spot,
the right person is chosen for the right reason and that person was you. Ranting like that 'boss' of yours is the 'true' cause of the so-called global warming....

Thanks for the reminder. I had meant to comment after watching The Gefilte Fish Chronicles on PBS here in Milwaukee last week. A joy and a pleasure, especially having followed the making and premiering last year through the "blob".

You and David frequently make my day. Your word count supports your over-achieving status.