There were a number of things I considered blobbing about today. Like, I miss shopping with my mother—the discount queen, otherwise fondly referred to as Delores Defrost. We called her that because she would freeze everything. In fact, she often cooked in the morning, froze it and defrosted it for dinner. Who knows why, or even wants to guess. For years I discouraged her from buying me anything (unless we were together), because we didn’t have the same taste in most clothing—although admittedly I did love her stuff with sequins and feathers. But if we went shopping together we would both try on stuff and, even if we didn’t buy anything it was always hilarious to see what she would pick out – for both of us. 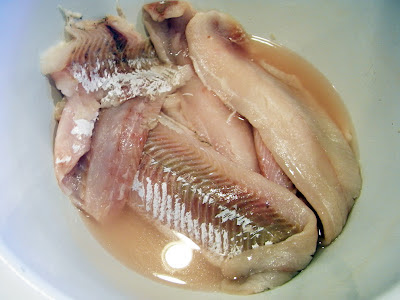 Then I thought I might blob about the arrogance of the next generation of Clintons. I guess if you grew up never living anywhere but a Governor’s Mansion or the White House and now you are 27 and making a six figure income at a hedge fund in NY, you might have an aggrandized opinion of just who you are and what you can do. But every time I see her or read about her, her behavior seems arrogant. It may be that she is painfully shy, or even afraid of campaigning for her mother – but I don’t think it humanizes her mother, I think it shows that Hillary will do anything to get elected, including putting her kid in very uncomfortable situations.

Then I was going to blob about the moron who put pornographic comments on the “Gefilte Fish Chronicles” web site. My guess (based on the lack of sophistication –OK stupidity—of what he left), is that it was some fifteen year old kid who is so desperate for attention, or to find someone to talk with, that he looked for a loving, meaningful place, and decided to do something ugly. It took us a while to get it down and now we have to rethink the comment section so that David can edit it and people will feel protected.

I even considered writing about the fact that I worry all the time about everything. Soozie calls it glass half full, and maybe it is, but I can’t seem to just let things happen without fretting. This, however is a book, not a blob so I moved on. 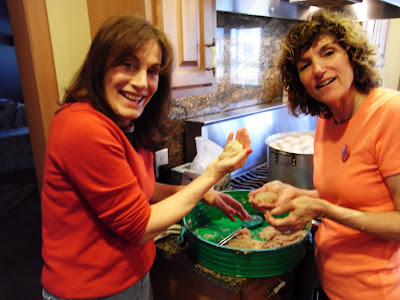 Karen and Iris with the perfectly shaped GFs
When I started to write about each of these things, there really wasn’t more than what you just read to complete the thoughts. I felt like Bill Finn, a wonderfully talented musical theater writer, producer, director, who said there was a show he wanted to write based on a song he had written. No matter how hard he tried, there was never more than just a song he could think of – so he stopped trying to make it more than it was. Unlike Bill Finn, there have been too many times when I continued to do something even though I knew it was a bad idea. But not his time. I’m just going to write about something that can be more than a paragraph.

We “hocked” gefilte fish yesterday. It wasn’t exactly like it used to be because the “Aunt’s” always seemed to know what they were doing. And we had, (after a million years of watching and assisting), only some idea. Honey arrived at Solly’s Fish Market (so clean you could eat off the floor) in Poughkeepsie at 7:00 and was at Rosalie’s by nine. In the old days Solly delivered the fish to Newburgh, but since Aunt Peppy moved to Massachusetts, there seemed no point in dropping it off at someplace where no one lived. Aren’t I silly—but a little levity never hurt anyone who is going to “hock” for at least an hour. You may think an hour is not very long. But imagine what it’s like to chop 20 pounds of ground fish, onions, and eggs until they are not only mixed together but the consistency is like -- well I can’t explain it because there is nothing like it. Even a French quenelle, although sometimes compared, is different because it’s pureed – and that simply wouldn’t do. What can I say. If you look at the ingredients on a jar of the already prepared fish, you will see it has some kind of filler. Our job is to get the gelatin out of the fish meat so when mixed with the eggs, it stays together without any matzah meal (which we use instead of breadcrumbs because it’s Passover and you can’t use anything with yeast). Anyway, just imagine chopping an onion and some hamburger together for an hour—non stop. After a while your arms gets numb and your hand actually takes the shape of the chopping implement. 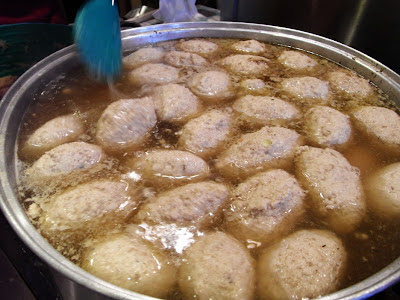 When we arrived at 9:05, the fish bones were already in giant pots yearning to be fish stock. But the stock isn’t stock until it cooks for at least two hours which meant the timing was perfect to grind the fish with the onions, hock, season (only salt, white and black pepper), and finally shape, before plunging the little guys into the drained, boiled stock. After all this time together the relationship between you and the gefilte becomes quite intense and it is often hard to let them go. OK, you know this is not true but my favorite question from people who don’t know is; Does a gefilte fish live in fresh or salt water? 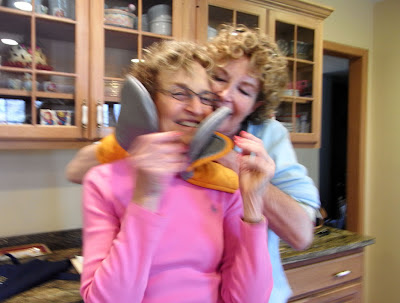 Rosalie and Honey (it IS a serious business, this Gefilte Fish)
At 11:00 the water was boiling and we started to shape them into the perfect sized almost oval, not too flat and not too round, balls. You try not to make them too small because then people will eat more than one and not too big because then there will not be enough for two Seders. After three hours of cooking, checking, and rechecking, we took them out of the pots (which are the size of a small ship), and counted 140 pieces of gefilte fish. It might be enough. 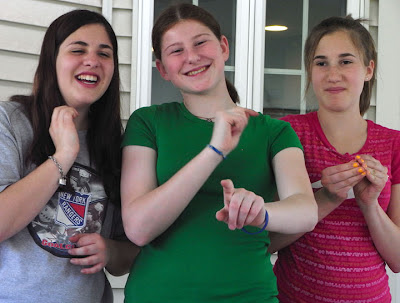 the next generation of cousins: Alyssa, Sydney & Milan
David considers the fish merely a vehicle for the horseradish. Many people agree. For us it’s a vehicle to laugh, argue, and remember. There is nothing that’s more wonderful. We’re just sayin... Iris
Posted by Iris&David at 7:00 PM

Iris and DB,
It makes me hungry just reading about it.
Cheers,
Joe

Joe stole my line. Made me hungry too, and made me remember how much fun it was to watch you cook.

Forgot to mention the young Ms. Clinton. She drives me crazy when she says, "That is none of your business," when someone asks about the (then) young Ms. Lewinsky. Surely she can come up with a better and less rude answer. As this campaign has continued, I have grown less fond of all Clintons.

Hello. This post is likeable, and your blog is very interesting, congratulations :-). I will add in my blogroll =). If possible gives a last there on my blog, it is about the Vinho, I hope you enjoy. The address is http://vinho-brasil.blogspot.com. A hug.