Crank Up the Gefilte Fish, Please

I’ve been in Nevada for the last week, trying to capture some of the elusive sense of what it’s like out here. Las Vegas (literally “the fertile valleys”) has erupted over the past two decades from a desert oasis where Dean Martin drove giant finned Cadillacs, to an absolutely enormous amalagam of people, stuff, and lots of money. Two million people now call the place home, more arriving every day. Until recently (like everywhere) the real estate market was doing one of those “lower left to upper right” curves.. now there is much for sale, and, also like everywhere, a question about whether those ‘good times’ will ever come back. 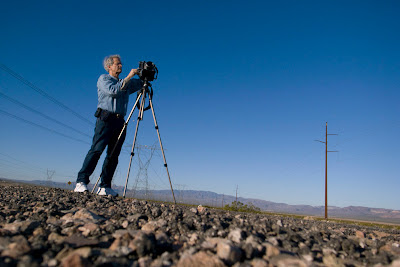 The startling thing about the place is how it just kind sticks up out of the sandy desert. The origins of the place go back to a natural spring which must have been quite a treat for cross country travelers two hundred years ago. But with all the building, and there is plenty of that, you almost feel like you’re never more than a three-wood from the sandy brush which typifies the desert. Down the pike about twenty easy miles if Hoover Dam and the town which housed the thousands of folks who built it in the ‘30s, Boulder City. One of the café’s there advertises itself as “best restaurant by a dam site…” Must be nice to always be able to edge out the competition. 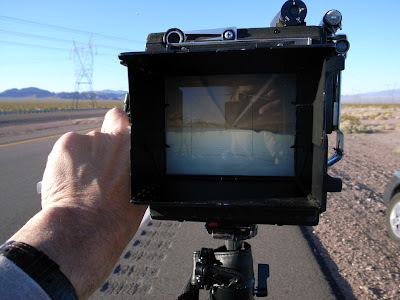 This morning, in quest of something wonderful (inspite of it all, those amazing photo moments have been rare this trip) I headed out south, towards Needles, California, the town I remember from my youth as always being the ‘hottest in the country’ on a very regular basis. Giant power line structures criss cross the land, taking the Hoover power to ungrateful Californians. It’s always worth getting up and out early if you are a photographer. It may not mean you will always get a picture. But the whole adventure of chasing early morning light is rejuvenating, even if you don’t come back with something so wonderful that you can’t help but share it. (You won’t find THAT picture here this morning.)

Vegas continues to grow in most directions, especially south and east towards Henderson. Anything you want to know about the current state of the ‘Malling’ of America can be found out here. Whole Foods, Costco, Walgreens and Walmart, all present and accounted for in untold numbers. But the best thing is seeing that in all that influx of new blood coming in, there are Koreans, Vietnamese, Latinos, Chinese, and even Japanese. It has sprouted, happily, one set of great eatieries after the next. And in a town where chains abound (Dennys starts to look up scale), the addition of the very affordable Ichiskey “sake bar” for late nite sushi alternatives to bad burgers is quite welcome. Most of us now and then become enamoured of a dish, try and get the recipe, and may even make an attempt to try it at home. Usually it’s never as good, which is why restaurants with self confidence know that giving you a recipe won’t make you never come back, but more likely will lead you to return more often. Last night I sampled some “boiled baby bok choi” with sesame oil and very thin sliced fried garlic. Sublime. Each bite of garlic I tried to deconstruct how it got to be the way it was. “Deep fried” the waitress confessed. But it made a smashing impression. And no doubt next weekend, it would probably be a good idea to have some hanging around for.. well.. you know… since it will be Passover.. some Gefilte Fish. I walked into Whole Foods after shooting this morning, and found a phalanx of phish at the front entrance. Yes, folks, it is that time of year: Passover in a week, and already the sounds of fishing being chopped are resounding off table tops and VCRs. 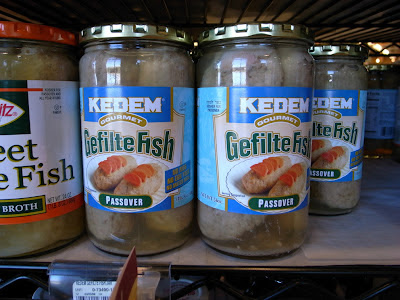 Our little movie “The Gefilte Fish Chronicles” which is finally being broad cast this year beyond just New York, has started another little flood of wonderful reactions. Folks who visit the website leave their impressions, and those are probably, more than any other reason, what has kept our own interest up in the film. It was on Channel 13 in New York last Monday night, and over the next two weeks will be on in the following cities: (Some stations we didn’t have the detailed information for.. but check and see if it’s on a PBS station near you..

And don’t forget to think about the horse radish. All else pales in comparison to horse radish, happily. And it goes on everything! We’re just sayin’…David
Posted by Iris&David at 2:55 PM

hey pallie David, gotta confess that I prefer the 'Vegas when it was.."a desert oasis where Dean Martin drove giant finned Cadillacs." Never was, never will be anyone as cool as the King of Cool...oh, to return to the days when Dino walked the earth...

Well WNED is my territory. Toronto/Buffalo. Watch Charlie Rose on it all the time,I like it when he giggles around pretty women. Charlize Theron,was complete gradeschool torture for the poor begger.
"Charlize, giggle...giggle.Thanks for coming today...giggle,giggle(fix tie,stack papers,spill coffee)giggle,giggle."

However, you are right,there is no listing for the "TGFC". Im going to phone them today (wned,not charlie rose,giggle,giggle).

WNED does have
"Travels To The Edge With Art Wolfe",
every Saturday. What the hell? This is national T.V. shouldnt people make the extra effort? Damn't Art,I want someone not afraid to go OVER the edge! Now thats a show I'd watch!

TV Narrator:
Here we see famed wildlife photographer Art Wolfe crawling slowly towards his photographic prey. Closer,slowly, like a lion stalking a lamb. He is at the edge... slowly... closer...oh...my...gawd! He has gone OVER the edge!! Art!! Mr Wolfe?!! The humanity of it all!! He didn't just go "TO" the edge he went "OVER"!!! Now thats photography ladies and gentlemen!!

(OFF SCREEN)
ART WOLFE:
Hello? Is anybody up there? I think I ripped my jeans,or something. Hello,anybody...Ummm, I think I went OVER the edge. I only intended to go TO the edge,but I think I went OVER it instead. Hellooooo?Anybodeeeeee? If you are up there watch out for the edge...just go TO it...im serious...especially if you have a camera...i need a new jeans now...are you recording this?...Hellooooo?

The show of shows was on two weeks ago: Art Wolfe, battery of cameras, strobes, and light stands in hand, went after the elusive Gefilte Fish. Seen only in northern climes, and only certain days in spring, it remains elusive, indeed, and to capture one, well that IS going over the edge: just dont stumble and fall into the vat of horse radish. Few have ever lived to tell the tale.

hey, there's nothing quite like chasing the early morning light when you've a great tech providing it.