Last Tuesday we had a planning meeting for our 40th College reunion. We all sat around telling one another how good we looked. And we do look pretty good. And we had a great time. Sue, one of the great funny people, really nailed why we had such a good time. She said it was because with this group we didn’t have to pretend we were younger than we are. It is stressful always hoping people will think you’re ten years your own junior—is that right? I think the other part is that the old friends we see only on occasion don’t have any idea about the baggage we carry. They don’t know our children, our work, the general trial and tribulations of our lives. They know and remember us from before we had any baggage and , although they are willing to learn about problems we may have had, that’s not the way they see us. Anyway, we toasted to ourselves for about 3 hours and we left feeling quite warm.

Maybe you remember that Kerry and I opened a joint checking account for joint entertainment purposes. We had the maiden voyage of the Debit Card last week. We journeyed to the Upper East Side – she lives West and I live Midtown—but there’s a cute French restaurant that, although, not our favorite, has good food and nice service. The only issue is that they have a live Jazz band, which is not as good as it is loud. But we had a wonderful time – as is usually the case. After dinner she walked west to find a cab and I walked east to take the subway. But when I got to 2nd Ave, there was a bus right on the corner and going my way, so I got on. Normally, I don’t take the bus because it is so slow. But I wasn’t in a rush. There is only one way to explain about the bus. When you work in DC, people who live in Maryland are different than people who live in Virginia. On the surface we all look the same, but we’re not. It’s the same thing with people who live in Westchester and people who live in New Jersey. I can’t explain exactly what makes us different, but we are. It’s the same thing with people who take the subway and those who prefer the bus. And although there are those who claim the subway is not safe at night, the buses are no picnic and, in addition, because you are above ground, they are well lit and in your face. In other words, you cannot miss how nuts the nuts are – on the subway they go sit in the corner. It’s what makes NY a colorful place. Last night ‘Davis’ and I took the bus again, (we let him out of the dungeon for the weekend) and it’s much more fun when there are two of you.

And speaking of yesterday (another one of those transitions), Oprah went to Iowa and talked about why she was working for Obama. Actually, she didn’t say exactly why and she did mention that when she looked out she saw a cross section of America—I doubt it since almost the entire audience was white, but I guess the lights were bad and the place was cavernous. Having worked with a number of celebs who appear on the campaign trail, I can honestly say that she didn’t do anything to hurt his candidacy. Her appearance would have been more effective had her speech had been targeted to women and blacks (both constituencies Hillary needs), because it would have sent a message about how competitive the campaign is going to be. But she’ll be much more directed by the time she gets to New Hampshire. Celebrities don’t usually help, but they can hurt if they are perceived as polarizing—like Barbra Streisand. What was interesting was that the Clinton campaign had three generations of Clinton women on the trail and the media compared their appearance with that of Oprah. I may be overstating here, but I just don’t think it’s the same thing. Oprah is a star. She has had an enormous impact on women’s reading and shopping habits. Maybe star is not the right word. She is a phenomenon. She has worked very hard to achieve the status of most important woman (not elected) in America. Mrs. Rodham is a mother. Chelsea is a lovely young woman but she didn’t earn her celebrity—she was born into it. It’s a first that the three of them campaigned together but I don’t really think women, who are struggling with the expenses of life—food, health care, education, would have paid for that ticket. It’s not quite like seeing three generations of Dubroffs, but then I think we would be much more colorful—somewhere between the Clintons and Oprah, but we don’t give her level of gifts anymore—which, by the way, she mentioned in her speech.

Speaking of gifts, there’s a store I have come to love called ‘Steve and Barry’s’. They have t-shirts, outerwear, college crap and terrific baby clothes. They are the only store that carries the “Bitten” collection (Sarah Jessica Parker's stuff), “Amanda Bines wear” and there is a new line but I don’t remember who’s it is. Anyway, when I called to check on an item they were supposed to get in, the call went to India. It wasn’t until I said I wanted an item at the Manhattan store, and they asked “where is Manhattan?” that I was clever enough to figure out they were not located in the US. This happened immediately after I was trying to deal with an online payment for Mom’s Universal credit card, and I was connected to the Philippines. My years as a diplomat, taught me many things, the most important being that cultural differences between people of different nations really do exist. So when I tried to tell the service person that my Mom hadn't received a bill on line - the service person was quite insistent that it was sent and maybe it went to spam (which meant there were finance and late charges) but it wasn't their problem. I mean. She repeated it maybe nine times despite my attempt to resolve the bill. In desperation I demanded to speak to a supervisor and was then connected to someone in the US -- who gave me bad info but resolved the finance issue. People who you deal with out of the country are not bad people, but they just don't operate the same way we do -- not unlike, subway-bus people or Maryland-Virginia. There are just those subtle differences that prevent productive communication. 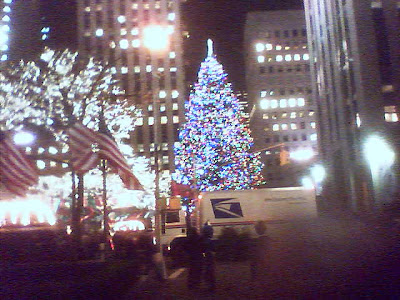 And speaking of yesterday, and people from all over the world, there were thousands of them viewing the tree in Rockefeller Center yesterday. I think they must have changed the lights because it is much brighter and more beautiful than years before - and I even took a picture. We're just sayin...Iris
Posted by Iris&David at 11:38 AM

Thanks for the picture of the US Postal Service truck. I see you are now competing with David's FedEx truck pictures.

I guess the message is mail early so your post arrives to celebrate the holiday lights.

Are they using the new LED lights on the tree to make it more "Green"? HA.

Hi David Burnett,
Are you the same photographer of a 1984 photo of the (I think) Ethopian Mother & Child in a refuge camp? I've had a copy that I believe is from the New York Times Magazine and I still am very moved by it and want to know how to get a better copy. I left a message for you.
Hope to hear from you.