The Hillary I Know

There has been a great deal of Hillary bashing lately. The media seems to have lost the ability to evaluate the candidates in the way journalists should, (I hesitate to use the word responsible) and they have chosen to bash rather than give be analytical. She’s an easy target for many reasons. I probably don’t have to tell you what they are but it’s never my intention to let you spend any time struggling for answers.

For those of us who live inside the beltway and have worked in politics it’s about who we know. Let me explain. After thirty years in Presidential politics you get to meet thousands of people who do, have done or will do, the same job that you do. The reality is that, after that many years, you either know everyone in charge, or you are an incredible dolt. I choose to think of myself in the former category. In politics, like any other high stress occupation, you make friends and enemies and you judge these people based on your list of personal priorities. You ask yourself questions before you ask these colleagues questions because you want to know who you can depend on to get the job done. So you want to know who is: competent, arrogant, smart, compulsive, friendly, a screamer (lots of those in Presidential politics), task oriented, thinks ‘greater’ picture, personable, takes initiative, and most important –returns phone calls. If you put together the people you know with what they are doing in each campaign, first you just shake your head and then you say, “How did that happen?” Sometimes it’s a positive question and sometimes it is indication that the powers that be have lost their minds. But because different people have different experiences you can only hope that in some cases, theirs were better than yours.

For example, when I started to do advance, I prided myself on the fact that I would be welcomed back to any community in which I had worked during a campaign. In the early years of Presidential politics this was not a good thing. You were supposed to go into town, be as hard-assed as possible – leave blood --- and blow out before you got arrested. During the entire time I worked in Presidential campaigns I only got arrested once and that was in New Orleans for hanging posters – oh and in McAllen, Texas for driving through a park – I was too frustrated trying to follow directions. Neither had lasting consequences or impacted on the candidate but my ticket probably still exists in Texas.
Anyway, It was hard for me to work in other than a friendly way and I still got the job done. However, the model for the way you were supposed to work was a guy named Richard D. Richard started out with an advantage in this “leave blood” category because he looked a little like Dracula and was able to frighten even before he opened his mouth. Richard was ruthless in his politics. He was never going to win any popularity contests. He hated the fact that I would not play the game the same way but he liked me because I didn’t take his crap. Ultimately, years passed, politics changed, and people refused to work with Richard. Most people felt that he was ‘more work than he was worth.’ But I liked him and would have many arguments about his political values. My point is that we, (political hacks and whores) have lots of varying opinions about what’s going on inside the campaigns and we judge them not only by the candidate but by who’s working/advising them.

Anyway, I have worked in some capacity with all the Democratic candidates except Kucinich. But I worked with Hillary far more frequently and closely than with the others. There was a small group of McGovern Senior staff in 1972. We were all so young that calling us Senior was laughable, but we were committed and found places to thrive. I worked in the Massachusetts Headquarters with the brilliant and volatile Pat Caddell, Bill Clinton was in Texas, and Hillary was working for Doug Coulter in Indiana, I think. We didn’t spend much time together but we were all about 25 and had the same dream—of course we won in my State, which gave all of us, competent or otherwise, a big boost in campaign lore. Over the years I would run into the Clintons (we had many mutual friends and campaigns), and in 1992 I went to work for their/his campaign.

Having developed a name (some not so nice I expect) I was able to work on a campaign that was not located in Arkansas. It was the Clinton campaign’s goal to tell people why they should elect Bill. It was my job to tell people why they shouldn’t elect Bush – but always with humor – sometimes chickens and other costumed characters. But we were always a professional communication operation and we were never rude or disruptive. The Clintons admired our ability to do things that could never have been done inside the campaign and so after the election I was asked to go into the Administration. At first I refused but said I would help out until official appointments could be made. But then, Hillary asked me to help with Women’s issues both domestic and international –so I stayed as Chief of Staff at USIA (a former international public diplomacy agency).

Hillary was instrumental in getting the West Wing to create a White House Women’s office, which was the way the general public could express concerns about women’s issues, to the White House. She also helped us to create a Women’s Governmental organization where the senior women in each agency would come together to discuss problems and develop solutions for women who were working in government and issues that impacted on women all over the world. This included people like Donna Shalala, the Sec. of Health and Human Services, and working with the senior female officer at the CIA to talk about whether the technology available for detecting bombs could also detect breast cancer. And Hillary was very involved in what we were doing both inside and outside the White House. 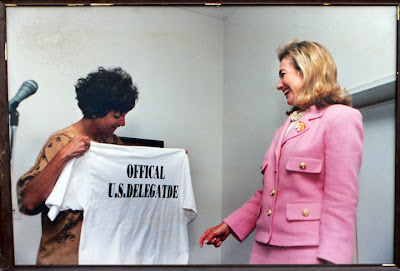 She knew how to listen and further invested confidence in our ability to act. She was serious but had a good sense of humor and enjoyed the interaction among all of us. She was approachable and, on one occasion when we there was a screw up on the t-shirts we were using for the official delegation to the women’s conference in China, we laughed so hard about it that we actually had to stop the meeting or get seriously reprimanded by the State Department bozos. So I like her a lot. I like her as a person and I have questions about why people in the public don’t like her. My conclusion is that her staff, (some of whom I think are competent) have made bad decisions about the Hillary they want the public to see. It’s not too late to change this, but it will mean that some big campaign brain will have to take their ego and shove it. And more importantly, Hillary will have to be comfortable about who she is – not who she is with Bill or her staff—but who she is as a mother, friend, competent thinker and manager. And I think people will be more likely to be comfortable and think they know and like her. She can be a good President and even be a good friend to the public. We’re just sayin... Iris
Posted by Iris&David at 3:39 PM

Maybe you can arrange for her to meet with someone like Meryl Streep. If anyone can coach her in toning down her "shrill" I bet Ms. Streep can.

Iris,
Thank you for that. I am a Hillary supporter and was on her Press Corps.when she visited South Africa in the late 90's.I also know a few FOBs. My husband and I are actively campaigning for Hillary.A significant number of my friends and aquaintances are horrified by this, and I am quite exhausted at continually having to deliver a thesis defending my position:"Yes, I am to the left of Hillary, and yes I was furious at her support for the war etc. etc, blah blah.."
So thank you for your comments. I hope you don't mind if I forward them to my Anti-Hillary list and to the Undecided I-Dont-Like-Her-Persona,list?

BTW, I come to this list via an email from David some months ago!

I am from Albany, NEW yORK and i am going to Vote democrate but here is why i will not Vote for Hillary: She is Fake, Phony, and oppoirtunistic. She is Flip Flopper, Rude, and LAIR. She stayed in relationship with her Husband because she is POwer Monger and attention seeker. She is not sincere to any body, So Please stop this "I KNOW" BS!

So another Clinton is trying to get in the White House. I have had enough of an adulterer in the White House. Also Hillary loves to be abused by her adulterous husband. Why do we have to put up with the example that sets for us? Also makes you wonder what it will gain the Clintons to be in the White House. And they both act arrogant, and she is phony, bully, and acts like a dictator(reminds me of Hitler)so angry, probably from being abused for so many years by her husband. How would your angry level be if you had been abused and so publicly by your supposed loving husband and partner. Some partner. Just phoniness and a demeanor of entitlement. Personally if we have to have an adulterer in the White House lets have a new one. I am for change.