And one day we’ll all understand... 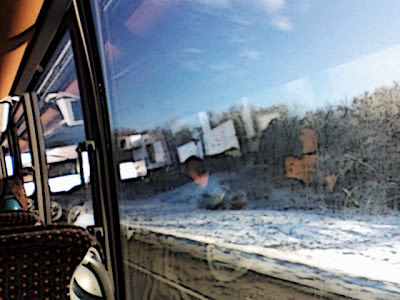 I’m riding on a campaign bus in Iowa, speeding smoothly across gently whitened farmland whose snowfall yesterday has left an artist’s touch across the soft rolling hills. I’m riding on a campaign bus, tears flowing like that snow, as I listen to my iTunes in a attempt to make everyone else think I’m trying to be serious journalist like each of them. I’m riding in a campaign bus, trying to digest the news that Dan Fogelberg the wonderful songwriter and singer died of prostate cancer yesterday. He was 56 much too young years old. I suppose people pass all the time, contemporaries of ours, the known ones being in the fields of sport, entertainment, and perhaps politics. I can’t remember weeping at the passing of a singer before, though, even thinking back to John Lennon. I suppose Lennon’s horrible end was much more of a news event, and in that regard I must have internalized what I, a kid of the 60s felt. Fogelberg, five years my junior (he was only a 7th grader the year I graduated from High School!) touched another chord.

There are a few songs in the mySpace of my mind which register as real moments, for things that I’m not even sure I can tell you exactly what they are. Music can be such a subtle and sublime thing, and each of us takes tunes to heart which touch extremely personal, sometimes fragile memories of something dear to us. I know that walking through the Quang Tri press center, a dorm like arrangement the Army set up for the throngs of scribes in the 1971 Laos invasion, is when “Fire and Rain” came to mean something to me. The helicopter I’d tried to board – but turned down for -- with photographers Larry Burrows, Henri Huet, Kent Potter, and Keisaburo Shimamoto had been lost that day, shot down by North Vietnamese gunners, and the emptiness and tragedy of the moments following that news were colored forever by sweet sorrow of “Fire and Rain.”

Other moments in my life which seem destined to be wrapped around a lyric or a tune come back at the strangest times. During one of those difficult periods of courtship when Iris and I were in the “off” part of an “off and on” year, we both kept coming back to a Jeffrey Osborne song, each of us wondering as he did in “Don’t You Get So Mad” -- ‘ Do you have to get so mad???’ Every time we would end up at odds, just asking that question, even if never as cool as Jeffrey did it, seemed to get us over the bump in the road.

In the mid 70’s, once I had moved to New York, I often walked home from the uptown Contact office, or from Time-Life, passing through the record stores of Times Square late at night (this is pre-Disney), fighting your way for nearly every step between the gadflys, hoodlums, pimps, and theater goers, to see what the new LPs were. During that time I would sometimes buy a record on a whim, either having heard a lyric or two on the radio, or just take a guess based on a cover design. I’m not even sure what the first Fogelberg song was that I remember. I know he was a kid, early 20s. Yet nearly every song I came to hear from him had such a rich personal sense of discovery or maturity to it. Other than athletes, it remains rare to find someone so young that their talent just jumps right out and makes you sing along, sharing for that moment the poetic ectasy of a thought so beautifully stated that you can only give yourself up to it.

On first listen, some of his songs seemed a little schmaltzy, but rare was the tune that didn’t work its way into my soul. “Same Old Lang Syne”, a song at once so personal and universal, that every love ache you have ever felt comes back in imagery that is convincing, and beautiful. “Living Legacy”, a tribute to his dad the bandleader and music teacher always makes me think of my dad, Ted Burnett, who, like me - unable to play a note - nonetheless passed on a sense of optimism and goodness in humanity (oh hell, let’s just call it Pollyanna) which I wear today. Even “Part of the Plan” whose lyricism and melody I would be hard pressed to explain, draws me to its “One day we’ll all understand..” view of the world. Maybe this is the kind of moment that iTunes was meant for. The passing of a poet of our time, and if you’re not sure who I’m talking about, well, go listen to a few of his songs. Enlightenment is cheap. Just before the bus left Des Moines, I got up from my 8th row seat, and walked forward where a couple of writers from the Post and the Times were sitting next to the trip tech guy. All of them were at least fifty. In the back of the bus, near and behind where I’m sitting are a team of ‘campaign embeds’ young writers, bloggers and videographers none of whom is over 35. For a moment I had to share the loss with another – a grown up. Each of the four of us agreed – what a sad loss it was. H from the Post said he, too, had several albums at home. I’m sure by album he means a 33rpm LP.

When I heard, I got a bottle of wine going, something to numb life a little. My College dorm room and your "dorm" couldn't have been more dissimilar, but it was always filled with folgerberg,and JT's music too. Lang syne, I was sure, was written just for me. Like you its an real effort to listen to Leader Of The Band, or Run For The Roses, without crying: My father was a horse trainer. Its a tribute to Folgerberg that even though you and I have a 16 year difference, his music plays through our lives with he same honesty.

James Taylor ,Harry Chapin, Fogelberg,Cat Stevens,jackson Browne, these are the remarkable poets that pen the soundtracks of our precious limited days. Thank God we have the music.
----

Oh, the long lazy mornings
In pastures of green
The sun on your withers
The wind in your mane
Could never prepare you
For what lies ahead
The Run for the Roses, so red

Thanks for your thoughts. Have a good trip. Blue Skies.

Had no idea Fogelberg had passed. Too much Iowa caucus blah blah going on around me..I ran into a 28 year old child-friend today and gave her a music history quiz. Naturally, she had no idea who D.F. was.For that matter neither did my 60 year old husband. He knows all the music but never attaches names to stuff like that.
All this reminded me of a) how old I am- something I try to deny at all times: and b) that there is very little memorable music around these days.
Another sadness.
Hope Iowa is fun.Cant decide who is the the worserest in the Republican line-up. Should any one of them become president, shoot me!!
Tessa Gordon