It Sucks to be Us, Sort Of 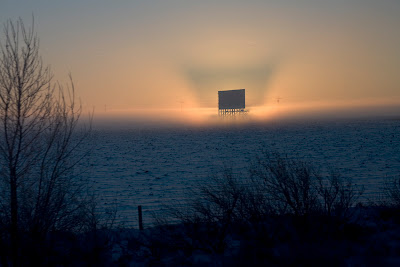 It Sucks to be Us. Well Sort of.

(Editor’s note: this was written on a campaign bus at 8:15am, and posted at 8:45am, all on the way to the day’s first event in Iowa. You gotta love wireless!)

Check out the schedule of the “anyone” for President campaign and you’ll see a couple of things. Once you read the first entry, something like “since we have a 3 hour bus ride and we need to be at the event by 9am,.. well you do the math..” you start backing the clock up, and you realize you’ll need to be up by 5:30 am. I realize for most people that doesn’t seem really draconianly bad, but for someone who constantly re-calculates how much he would want to be paid to host the Today show (up at 2, limo at 2:20, office at 2:45, work till 6:30, make up at 6:40, on air at 7:00) –it would have to be at least 9 bucks an hour – there is something which we photographers deal with on a regular basis that proves our lives suck. The good Lord, in his bountiful munificence is basically our lighting technician, and wow, does he do a great job of it. 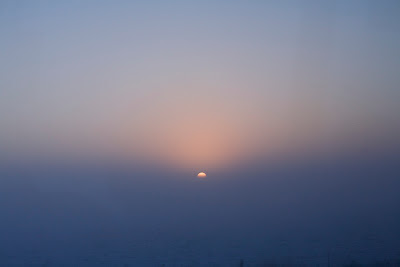 Light, as most photographers know, is what our lives are about. Some is strobe, some is incandescent (i.e. a regular ole house lamp), some might be the new curly-que fluorescents, but in the main, the big guy upstairs is in charge of the REAL light. The sun, the giant source of all that outside and window-lit goodness, remains the great enigmatic, sometimes quirky essence of what we do (photo-graphy = writing with light.) This morning as we gathered at the press bus at 6, and moped around briefly (we’re all, journalists and advance people, mopers of the first degree) getting on the bus, next to the several seats worth of bagels, coffee, cereal, Moonpies, and cream cheese, the general melancholy of early risers made itself felt. Whining about sleeping (we whine well too, let me add) on the nearly 3 hours drive gave us something we could all share in common misery. 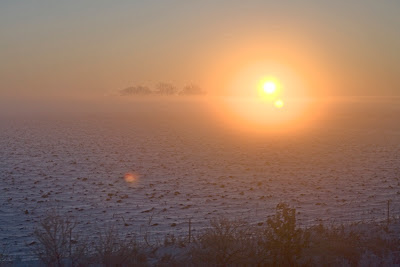 About 7:30, as I had just finished showing a few photo colleagues in row 5 and 6 some of my 2004 campaign pictures, I turned and looked out the window, catching the briefest glimpse of the rising sun just beginning to poke it’s head over the horizon. It was a quarter of a disc, dark deep orange, filtered by a thick layer of Iowa fog over an empty, snowy farm acreage. It was something. “Wow,” I uttered, “ check this!” I grabbed a camera and immediately started shooting, followed seconds later by two other photogs, and the rest of the scribes and bloggers, who were equally adoring the stark, yet powerful scape. Yes, it does suck to be us. We photogs do need to be where the light is. And HE has made sure that if you want it, you need to get up early and stay late. Summers are admittedly worse.. (up at 4:30am, shoot from 5:30 till 8:00, back in bed by 9:00.. then repeat it that evening at 7:00 till 9:00) Winters at least cut you a little break. You can be up as late as 7 or 7:30 and still see something startlingly wonderful. The power of those bars of sunlight breaking through a string of trees, a silo, a farm house, any obstacle which might bend or disrupt the light, is something to behold. Texture of terrain, heightened by the low-angle raking light of a sunrise or sunset, can be astonishing in its revealed detail. But be there early or it doesn’t work. You can’t re-construct it. You can’t can’t fake it. The dispersed beams of sunlight through a forest of tiny branches, that which creates what we lovingly refer to as “God rays” have a mind of their own and seem to run on schedules which man is not privy to. You can show up one day, and nothing special will be evident. But get complacent even for a moment, and you set yourself up for something which you won’t want to miss. So, yeah it does suck to be us. We have to get up early and be there. If you decide to be a photographer, just know that light doesn’t wait for you. It will be there when it wants to be, and doesn’t really care if you’re hungry, have theatre tickets, need to pick up the laundry, all human endeavors which need to be taken care of. 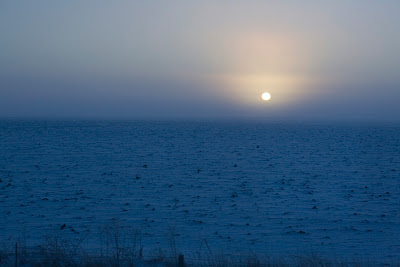 But don’t ever forget that getting up early, for all its suckiness, will also give you a chance to remember why you were born, why the world can be so beautiful, why, when you wonder what the real “meaning of life” is, the answer can be as simple as looking out the window of the bus, speeding through the Iowa countryside. It sucks to be us, but I’ll happily take it. We’re just sayin…. David 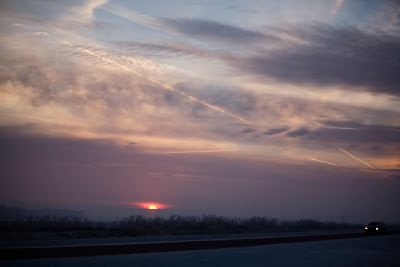 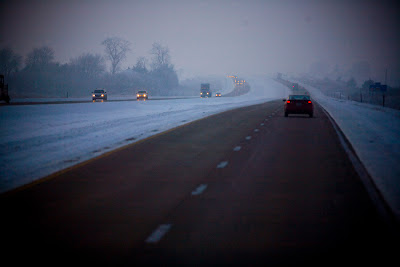 Damn it David, stop giving away the secret. Soon EVERYONE will want to be like us! Can't you, just for once, not take a killer billboard picture out the window of a moving bus? Just for once! Just back up the clock, and tell the rest of the folks that there is nothing worth looking at, so go back to sleep. You must adopt the Montana attitude. "Yes the winters are harsh, so you won't want to ever visit Montana. Just stay home. Nothing to see here." Then Montanans get to keep it all to themselves.

looks just like my Italian road trips without the good food and wine....you have my condolences

i'll pop a bottle of Brunello tonight in your honor

Master Photographer and
Master Lighting Tech...
Quite a team!