The Triangle of Health

My brother had a great idea. It’s not the first. He’s very smart. He thought we should do a documentary about taking my mother to Seattle in a big ass Recreational Vehicle. We all pile into the luxury ship on wheels, take about six or seven days and travel across the country. We would stop at any number of memorable places, (it would have to be someone else’s memory since we never went anywhere as children), and enjoy the sights. We would wind up on Bainbridge and maybe bike back across the nation. (You won’t get that inside joke unless you know Jeff owns a bike shop). We have been struggling with a title but then Jeff had another great idea. He thinks we should call it “Bury My Mother at Wounded Knee”. Not bad is it. (She liked the TV movie). Who ever would have thought we would have gotten to a place where we would even consider traveling anywhere with Mom. She was never really wanted to go any place. And when she got there she just wanted to be home. Even a museum in NY was an enormous effort – any kind of travel was just ‘not her cup of tea’ as she would say. Speaking of aphorisms, (I hope that’s the word I am too tired to remember), David never heard the expression, “Do you think I just fell off the turnip truck?” For those of you in the same place as David, it means, do you think I’m that stupid ornaïve? 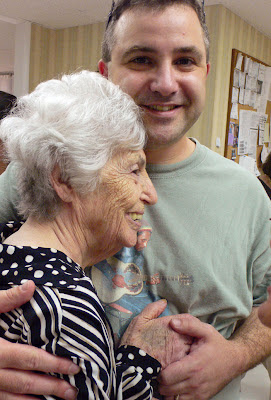 Seth & Rosie this past weekend


Back to travel. We have spent the last year traveling in what we call ‘the Bermuda Triangle’ of health – Merry Heart (the rehad center), Victoria Mews (assisted living) and St Clare’s Hospital. The triangle is accessed by a main thoroughfare, the Mt. Lakes Boulevard. ( I really wanted to include the Denville Dairy but I couldn’t figure out how to sell it as health or, for that matter, a point on a triangle). The Boulevard is about a four mile road that runs from Boonton to Denville. To their credit, the citizens of Mt. Lakes (which was once a restricted or ‘Christian community’), have built a walking path the total length of the road. It’s a lovely place for a jog. Mt. Lakes is a fairly upscale little burb. The houses along the Boulevard have sculptured gardens, and spacious yards. They are not McMansions because they are mostly old, and elegant. There is, in fact, a private lake along the side of the road about halfway between Boonton and Denville. The walking path is carefully maintained throughout the year. They plow it in the winter, remove the leaves in the fall, and pick up the litter all the time. It’s terrific. But back to the triangle. 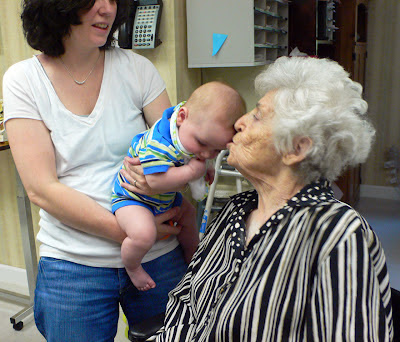 Nana plants one on Zach (the first Great Grand child)


Our travel has been continuous and unrewarding. Mom is alive but the spark is gone. And except for two unsuccessful escape attempts over the past two days, (which we learned about because they found her on the floor), both conversation and any repartee is no longer a part of the picture. Let me explain the escapes. One was last night when she was sure she could roll her wheelchair into the bathroom and use the toilet. Well, it almost worked but when she was getting up, she was too weak to turn, so she sat down and that was uncomfortable, so she lay down. That’s how they found her and because her blood pressure was high they sent her to the hospital—which is where we retrieved her and took her back to point three in the triangle. Today she disconnected the alarm on her bed – which warns the staff if she tries to get up-- and she slipped to the floor. 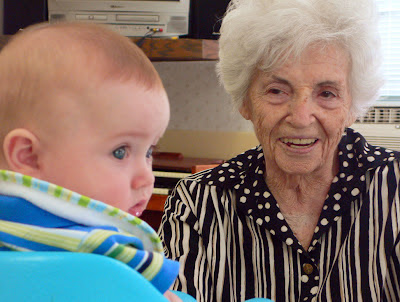 Point two (the hospital) proved to be unnecessary. So we’re pretty tired of the phone calls and have been doing “oh poor us” for some extended hours, but then we looked around at what other people are suffering. I talked to one friend whose mother is in a nursing facility. They gave her last rites four or five months ago, but she lasted. Now my pal is visiting her every day just to make sure she is fed. Luckily she lives nearby. At 2 or 3am her mother calls her to talk and lately she thinks the nursing staff is trying to kill her so she’s threatened to call the police. Much as she hates the idea my friend is going to have to remove her mom’s phone. Then I have another pal whose mother is 93 and totally incapacitated. She lives in a lovely apartment with the State covering costs for full time help. Sounds pretty good right? Not so fast. Her mother has a prolapsed bowel and every time she goes to the bathroom her rectum falls out. Is this too much information? Well. My friend doesn’t pay the cost of the help but she does have to pay the help to reinsert her mother’s ‘touchas’. (A more palatable word than rectum, don’t you think?) And almost everyone we know has an issue with caring for an elderly family member. I have promised my kids they would never have to do this for me --but this generation now understands what ‘care’ means, which we never did. So how come no official entity is really providing assistance? 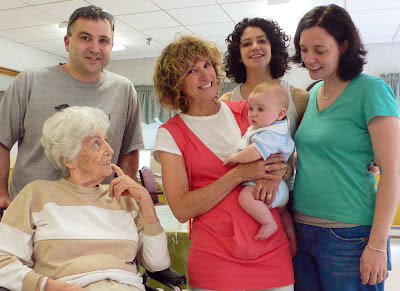 The whole fam damnily at Point Two on the Triangle: Seth & Nana, Iris and Zach, Jordan & Joyce
Tomorrow we take Rosie (much to our surprise our mothers name is Rosie not Rose) to get her driver’s license. She needs some kind of ID to get on a plane and that may happen if the RV doesn’t work and she goes to Seattle to vacation with my brother for a while. We have decided to film the adventure as part of our “Bury My Mother at Wounded Knee” documentary. We’re still looking for another title but we know if Mom still had her sense of humor, she would love that one. We know somewhere behind those recently vacated eyes, Rosie is in there, and we sure would like to get her back, but it looks like that’s not going to happen. So we deal with a new reality and hope if it’s not Rosie, Sylvia will travel some distance and pay us a visit. We’re just sayin....Iris 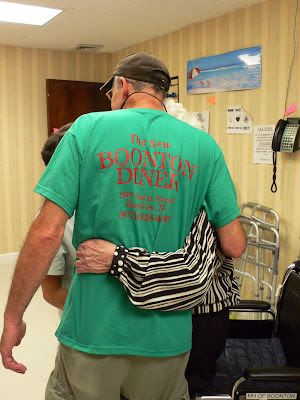 Nana & Jeff - with an plug for the Boonton Diner
Posted by Iris&David at 11:15 PM

Proves the Woody Allen theory that when life is miserable and unbearable - make a funny movie about it. As far as titles (loved the wounded knee thing )here are a few that might work too.

"Four wheels and a Rose – The Battle For Seattle"

"A funny thing happened on the way to Bainbridge"

I feel like I know Rose a bit through the Blob, she is for sure a special heart. I hope she finds a real sense of peace and security during these days. I cant imagine a better group to be surrounded by than you guys.

Every time I think of my mothers death I laugh out loud - you know what I mean - She was great, kept it as light as it could be,even when we were at our worst. Anyway we miss her, but its true, you remember the joking around and their laughter the most.

You could always RV up to Canada, "free" health care!! If you do, drop by and see us, Stratford has great Theatre.