It's a Malted Thing, You Wouldn't Understand

There is almost nothing better than a malted milk shake. Some people would say sex is better or being a billionaire is better but those things are in a different category. Yes, there are different categories. That’s why people use the “apples and oranges” analogy. Although, apples and oranges, along with malted milk shakes, are in the food category, while money and sex are not. I mean, you could stretch and say that you can’t buy food without money or you could have better sex if .... nevermind, that’s another blob.

Over the last few months my lovely husband and I have become obsessed with finding and having a malt. It started when Kat and I went to Windber Pa. to meet with the Murtha Breast Cancer Clinic people. As we were approaching our turn off I noticed a Dairy Queen. I love Dairy Queen in the same way I love a malt – but different because it’s also in another category, but more closely related. There are three things I love at Dairy Queen. The pecan chocolate sundae, a chocolate dipped vanilla soft ice cream cone and a shake. They don’t have malts but the shakes are pretty damn good. For a long time we were Dairy Queen deprived, but then two opened, one at Tyson’s and one in Falls Church—both within a 20 minute drive. Until they opened the only DQ we went to with any consistency was in Ghent NY, near my cousin Honey’s. But we really only did that about twice a year, so imagine our excitement when so many opened in Va. 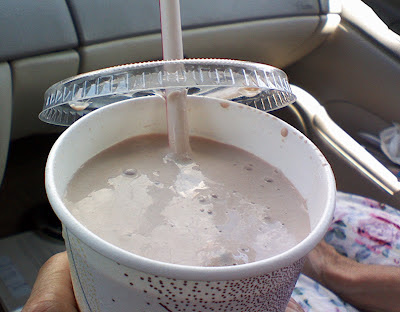 Chocolate, in its Malted Glory


Anyway, back to Pa. We decided, when we first passed the DQ, (and it’s nearly impossible to pass one up at any time), that we would stop on the way back. It’s always hard for me to decide what treat I will devour at the DQ but I hadn’t had a shake in maybe ten years so I went the ‘drink’ route. And I was not disappointed. It was incredibly divine—that’s the good news. The bad news—I have not been able to get the taste for shakes out of my mind, yet alone my mouth. Lately, whenever we pass a sign that says shakes or malts we have to stop and see if they meet our very high standards. When we go to Cow Town, which we have talked about in previous blobs, we pass the Olympic Dairy Bar. It advertises, among many other goodies, malts and shakes. Going to this little place is not like going to a “Tasty Delight” or a DQ. First of all they are not customer friendly: they refuse to give free samples, so you can’t get a taste of any ice cream you might want to order. (And they hardly ever have the ice cream you might want to try). They also refuse to make their malts with hard ice cream and milk preferring to use soft ice cream that mushes. Much to our surprise it is quite acceptable. There is also a list of things they won’t do and that the customer is not permitted to do. The place is really weird. It’s as if they’re channeling the Soup Nazi on West 54th st. (“If you don’t move down the line immediately, you won’t get fruit or bread!”) That being said, they have wonderful ice cream products and it is well worth the stop even if it’s not a Tuesday or Saturday-- the days Cow town is open. They are, however, closed on Wednesday, so don’t make a middle of the week trip. 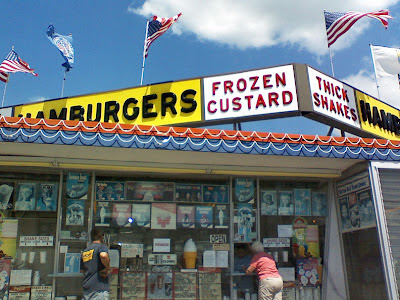 No Free Samples, but worth the Pain - The Olympic near Cow Town

Our desire for a remarkable malt knows no bounds, but with Mom being in the best shape (I know this doesn’t begin to describe what she’s in, but it’s the way I prefer to think about it), our malt geography has been somewhat limited. We did get my brother involved in the search and found that within a ten mile radius of Boonton, NJ there are a few notable places to have this sweet drink. In Denville, just west of Boonton, and part of the ‘triangle of health’, there is the Denville Dairy. They make their own ice cream and have soft serve as well. They use hard ice cream and milk for their shakes and malts and you can choose between thick and ultra thick. The latter of the two has to be eaten with a spoon. I prefer thinner. And you do have to insist that they mix it until it’s smooth—unless you like a lumpy malt.

If you drive just ¼ mile through Denville there is a Stewarts. We never actually sampled their malts but we’re assuming, based on our experiences as children, that at the very least, their product us palatable. This might be wrong, but because were closed last Saturday before 9 pm, we won’t have accurate information unless we hit them in the afternoon or they stay open past 8pm. Moving south onto Main Street in Boonton, there is a small sandwich shop called Dan’s that is owned by a sweet guy named Pat who also does limo pick-ups at the airport. He doesn’t have malteds but if you brought in the powder I am sure he would put it in one of his excellent black and white shakes. I bet he could also make a dusty road sundae, which is your choice of ice cream and syrup with a big spoonful of malted powder spread on the top. Moving a bit to the north, Jeff found a little coffee shop across from the train station in Towaco (ah, the richness that is North Jersey!) that he felt excelled in the malt making area. Again, we didn’t have a chance to sample this one, but Jeff is a pretty reliable food and beverage source.

And here’s the best news. We really don’t have to travel any further than my kitchen to partake of the creamy delight. It happens that I possess an actual, true, 1960’s pea-green, upright/heavy steel, malt machine -- which we used last night. I wish my 1960’s mind could remember where it came from, but it seems to me that I have had it forever and not (since the women in this family are always on some kind of diet) used it for 20 years. Admittedly, it was not what it might have been, but since we have the tool and the time, I am confident, we will eventually achieve perfection. (Editor’s note: There are limits to what you can accomplish with Sugar Free Chocolate Syrup and No Sugar Added Vanilla Ice Cream, but such limits are the challenges this generation is great at conquering.) But we hope to do that in everything we try. We’re just sayin...Iris
Posted by Iris&David at 1:53 PM

I love malted's. But my favorite is a malted float. You get them to make a small malted in a large cup. You then get them to add enough ice cream to bring it up to the rim. There is a place in Winter Haven, FL that makes these to order.

I suppose being a billionaire and having sex while drinking a malted milkshake would be the ultimate goal. (or variations on that theme)

I did drink a cherry coke with Pam Brabant while frenching her in grade seven. Thats about the closest I've gotten.

- Geeze what ever happened to her? I wonder if she's got money now? Tongue like a giraffe that girl,scared the hell out of me (and everyone up to grade 10). Later on she was an alternate on the highschool wrestling team (this was the 70's), a gal before her time - black mouth guard, groin protection, the whole sh'bang. Rumor was she went into the military,something to do with collecting information. No suprise to those of us she took out for a soft drink.

Geeze,If only I had taken her to the DQ instead of the Kmart restaurant- I was SO VERY VERY CLOSE!

Live a block from the DQ, will go there tonight and weep while malting.

Or maybe I should be thankful...hmmm.

M Harding we are dying to meet you. And we so love your commentary....

If you want to meet him, you probably find Harding scalping tickets outside Yankee stadium.
Swept by the Yanks. That sucks. But still five games up!

Seth and Michael, you are a constant source of amusement!

Another gem for enjoying malted shakes is The Jiggershop in Mt. Gretna, Pa. If you ever find yourself in central Pennsylvania, it is defiantly worth a visit. (They also serve their signature treat, 'The Jigger,' which is also equally delicious.

Chris.. I have to say, I think you are somewhat wide of the mark here. I checked out the Jigger (http://www.jiggershop.com/menu.asp) and let's face it.. its a sundae. Now I 'm the first one to stand up and proclaim the joys of a sundae -- preferably Butterscotch or Car(a)mel, but ill take damn near anything.. .but I think the ethos of a Malted Milk is such that in the days we are forced to live in.. you know. the ones with Subway TV commercials, Mickey D's "Im Lovin It", .. THAT world.. that we need to keep our wits about us when the subject of a Malted comes up. There are to many places which just flip on the soft serve machine, hold a paper cup in front of the nozzle, and like hot air squeezing out of a J-47 jet engine, create what they SAY is a milk shake. No way, Dude! That is about as much a milk shake or malted milk (two teaspoons of malt powder per giant glass, please)as an oil change at Jiffy Lube. So, we will keep the Jiggers hotlinks on our browser, for that mid Penn. trip to come.. but honestly.. the question of malted milks.. should be sullied with Sundaes. That said.. is either a) Snelgroves or b) Fernwoods in operation in SLC these days? they were both the font of all things icecream in the Kennedy/Johnson/Nixon years - when my Utah Ice Cream prowess was at its peak. Thanks for the note.. David B