So, Where is Sylvia?

Absence makes the heart grow fonder... At least I hope that’s the case because I fear my writing will be on and off for a little while.

David’s last blob explains what we’ve been through the last few days and he’s absolutely right except the Caddie is gold. If Aunt Sophie ever heard him describe it as beige she would send a signal from the beyond and basically, it would say, “what would you expect from a Jew who grew up in Salt Lake?”

They took mom to the hospital on Saturday and we drove up from Va. When we got to the hospital she was still in the emergency room—where she stayed for too many hours, especially considering there we almost no other people occupying cubicles. But emergency rooms are notorious for making people wait. My cousin Rosalie best described the doctor by explaining that she seemed very sweet and dismissive at the same time. This is not easy to do, but I guess when you decide to be an emergency room doc they must give you special classes on how to annoy the family of the patients without being obviously rude. So, when we arrived and I asked Dr. Erin if I could inquire about mom’s condition, she looked at me blankly and responded, “when I have a chance.” Then she proceeded to turn around and gossip with a fairly attractive male nurse. I said “fine” and went back to sit with mom. I continued to watch her do nothing for another ten minutes. Eventually, she wandered into our cubicle and with a total reversal in attitude described what kinds of tests they were doing and explaining that they wanted to admit her for observation. Mom was not happy. All she wanted to do was go home – back to the ’Mews.

We signed many forms swearing secrecy about not disclosing any information about Mom’s illness -- I assume this was in case there were bio-terrorists lurking in the coffee shop at St Clare’s hospital in Denville N.J. We waited another hour or so and a few doctors wandered through to check her—I don’t know what for. After another half hour, Desi, a nurse, actually came into the cubicle and told us that there was a room assignment and she would be taken upstairs within fifteen minutes. During the hours and hours we were there waiting, it was the only real information we received. They checked her into 224A. We stayed with her for a little while longer and then, since we had been driving all day and were exhausted by the travel and events, we made our way back into the city. She seemed in pretty good shape—other than being unhappy about having to stay in the hospital overnight.

On Sunday we drove to NJ expecting to take her out of the hospital. When we arrived she was in good spirits, chatting with hospital staff and the nurses. The nurses all thought she was “so entertaining and cute”. It’s not the way anyone in the Dubroff family would describe her. I mean she is funny, and attractive, but cute doesn’t work for me. Anyway, we moved her from the bed to a chair so she could sit up and talk. She kept dropping her right arm off the arm of the chair and it was her good arm (not the one she fell on last week), so I didn’t understand what the problem could be. I said, “Mom what’s with the arm”. She responded in some nonsense words which were mumbled and totally incoherent. I walked calmly to the nurse’s station—where I had bonded with her nurse (we brought them donuts) and told her that something was happening to Mom and she should come quickly—which she did. It didn’t take 2 minutes before there was a whole team of medical people in the room working on her. They thought she was having a stroke. At some point, a very short doctor in a stripped polo shirt, appeared and determined that it wasn’t a stroke, but he thought it might be a mini-seizure. Really, did I care what they called it? My mother was incapable of speech or the ability to think. She was, in other words, totally out of it.

David and I stood outside the room until the medical personnel left and Mom started to come around. Once she began to speak, the doctor asked her several questions to see if she was recovering. First question. “What’s your name?” She thought for a minute. “Sylvia” she answered without hesitating. Now, I don’t know who Sylvia is because my Mother’s name is Rose—but at least you could understand her when she spoke. “And who is this young woman”, he said pointing at me. This one gave her pause. She did not know my name. But after a few minutes she said “My darling”, and smiled. She didn’t know her maiden name but she explained to the doctor that she was married for so long she couldn’t remember. It took about 20 minutes and then she came back. She knew who she was, where she was born, what the date was, and who won the last Yankee game – not really—but she did know Tiger Woods won the Open. By later in the afternoon she seemed OK, even fine. 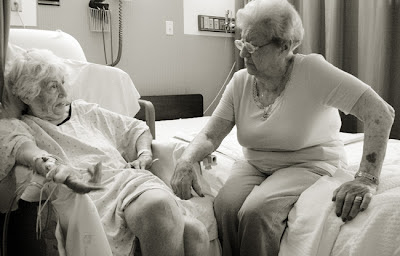 Rose and Peppy at St. Clare's

Yesterday, when we arrived at the hospital, we were delighted by what we found. She was reading the paper. She never reads so I thought, what a miracle, this is really terrific. Aunt Peppy, her twin came to visit and to admonish her for not wearing her glasses or her hearing aides. We talked for a while, but Mom can’t hear much of anything, so she pretended to listen but didn’t participate. What’s remarkable is that Aunt Peppy, who was in not great shape a month ago, is now taking Aricept, and wearing hearing aids. She is back to her being her stubborn and incredibly insightful, articulate self, (she has always been a learner). The contrast between the two of them is startling. Not only physically but emotionally. Aunt Peppy has always worked hard at being a well and active person, and Mom was never interested in doing that. Anyway, (I apologize for any overuse of my favorite transition), we were happy at the progress she made. We even got her up and walking around her room.

This morning, Tuesday, I got to her room while the doctor was there. She was not in good shape. She could hardly keep her eyes open. “Something with her blood”, he said. “I’m going to give her a transfusion and I think that will help.” I hoped so too.

I sat with her for most of the day. I tried to feed her lunch because she was too weak to lift her fork, but she had no appetite and refused to eat lunch. The good news was that when I suggested I run out and get her a milk shake, she agreed immediately. And she finished it without hesitating to take a breath.

Now we have to decide if she needs to go into rehab or if she can go home-- but with 24 hour private nursing care for a few days. I don’t think she’s strong enough to go home (the Mews) without having some rehab but we’re going to wait til Thursday to decide. Not strong enough doesn’t actually begin to describe what she is, but impossible to find a better way. It’s very difficult to watch a person you love struggling to be Ok. It’s harder still to watch them fail. She’s so weak and frail even breathing is an effort, but she’s come back before, and we’re praying that she has the strength to do it again. And besides, I want to know who Sylvia is. We’re just sayin....Iris
Posted by Iris&David at 10:28 PM

Milk shakes, not only being one of the essential food groups, has pharmacological properties that have never been explored by modern science.

Combined one with, say, a nice blue berry pie, and watch the transformation.