Thanksgiving, and Giving Thanks

Thanksgiving is over and for that I give thanks. It’s not that cooking and cleaning non-stop for twenty four hours isn’t on the list of things I love to do, but that, combined with the stress of my mother’s failing health, ranks is comparable to having another baby in an unmedicated birth. Having my brother, sister-in-law, and niece around was great. They are supportive and involved. But so many people in the same space when things aren’t so good, is never easy. And if it hadn’t been for my dear friends Lee and Marty. I never would have survived dinner. 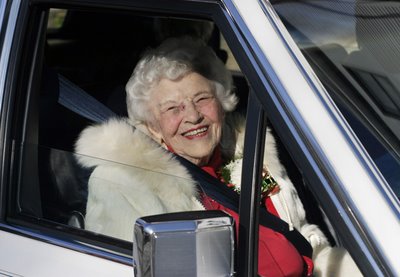 With due respect to my favorite cousins and lifelong friends -- who I do love and adore. Separate from relationships with my mother or other family members, Lee is the sister I never had, but if I could have done a special order—she’s the person I would have described. There’s never any miscommunication. We seem to share a kind of special understanding about life, love, kids, and fun. And when I asked her to bring a little dessert, she brought a pie for every person and they were all delicious.

I know it may seem unbelievable, but in a matter of four days my mother went from being a fairly mobile human being to not being able to get up by herself. We’re not sure if it’s the holidays, the botox, or just total depression, but she’s not doing very well. At the beginning of the week we were talking about 7 days a week with a companion in an independent living situation and now, just 6 days later we are not even sure she can make it in assisted living. 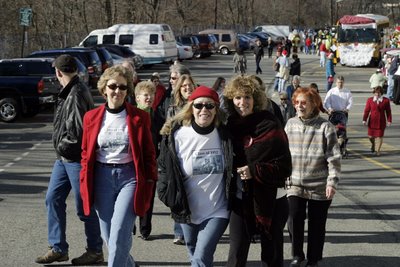 
But that’s not what I wanted to blob about. On Saturday, after Thanksgiving, there was a parade celebrating the 100th birthday of my Kindergarten teacher, Mrs. Fowler. The parade was actually a Christmas kick-off. Mrs. Fowler was the Grand Marshall. She rode in her 1988 Lincoln, which she drove until she was about 95. During the course of her 46 year tenure at John Hill school, she taught both a morning and afternoon Kindergarten class. It is estimated that she had over 2500 children. She never had any children of her own. The idea was for her former students to march behind her car and lead the parade. Whoever made the arrangements didn’t get the word out to too many people, so there were only about 20 former students in attendance, but spirits were high and the weather was beautiful. 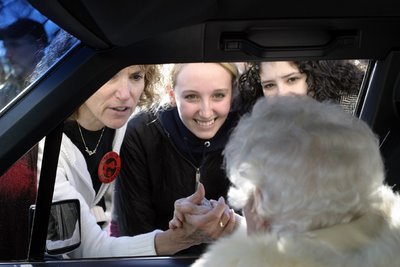 I love a parade. If you have read any of our blobs you know that we attended every scheduled parade in NY over the summer. Especially those celebrating some ethnic group or issue, like gay rights or Pakistani.Independence—which coincides with Indian Independence -- but the politics prevent them from having the same parade. As the parade passes by, (and yes there is a song), I love to march along and wave a flag or a bra—depending on the occasion. I love the color, the music, and the suggestion of happiness. I like watching a parade more than marching in one because you are able to escape gracefully. The only parade I actually ever marched in was the 1992 Clinton Inaugural Parade, where I accompanied the Raffi float because Jordan was riding with the star. It was about 5 below zero, the kids were in t-shirts, and we were among the last floats to be released. It was incredibly painful. My friend Marian, then Raffi’s publicist, ran around grabbing sodas away from our kids because there weren’t any conveniently located bathrooms, and walking out of a secure area, across the mall, just wasn’t that easy. As a matter of fact, the only thing more painful for me was packing goody bags for Chelsea’s friends at the White House immediately after the parade – who says politics is glamorous?
Suffice to say, the Inaugural parade didn’t compare with Mrs. Fowler’s tribute. The only downside was that the area from which the march began, to our final destination, (Santa Land), was so short that the participants were never really able to march. They were either standing still, shmushed together, or taking tiny steps to avoid falling over the group in front or in back of them. 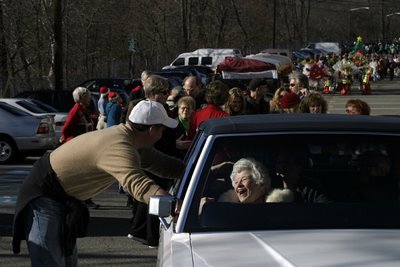 The Parade kicks off with Mrs. Fowler and friends

But that didn’t matter, there were a few bands that sat quite still and entertained the observers, and there were observers who entertained the marchers -- because they stood in one place for so long they formed lifelong friendships. And Mrs. Fowler was just glowing. It was difficult to see how active she was at 100 and how my mom had given up at 86. There’s a lesson here somewhere. I’m not sure what it is, but Mrs. Fowler chose to live an active, challenging life, and she wanted always to be happy and well. That’s the route we should all take to try to make sure our bodies and our minds don’t betray us. We’re just sayin...Iris
Posted by Iris&David at 6:41 PM

Hey everyone, I'm new! ..... just made my profile. Everyone says I need to share

something so I Just thought I'd let you know a place where I made an extra $800 last month!
Click here to find out more!
Be sure to check out my new page. :)

Hey everyone, I'm new! ..... just made my profile. Everyone says I need to share

something so I Just thought I'd let you know a place where I made an extra $800 last month!
Click here to find out more!
Be sure to check out my new page. :)

I always remembered her, and has seen her throughout the years because I was/am good friends with a classmate who was neighbors with Mrs. Fowler, so I got to see her often, having tea with my friend's Mom while my friend and I hung out listening to 70's music. : ) And she always remembered me.

I was at that parade, heard about it last minute, and I know of two other people from my class that made it also (I believe it was me, Carol Hopkins, along with Patty Zanone Jubelt, and I know that Ann Gentile Cox was also there with her family. I see some people I know in the picture you took. Unfortunately Patty and I didn't catch up to the car until right before it left. So were not in the pictures.

I just posted my kindergarten class picture up here.
:)