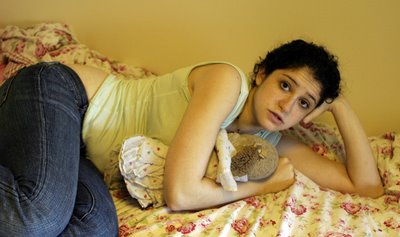 Jordan and Doggie, in their third Decade, Boston 2006

When Jordan was born, Aunt Irene bought her a little beige stuffed puppy. With pink ribbons in her hair and soft fluffy ears she was irresistible. When Jordan was about six months old and not being parents who worried about straining the air with chicken soup before she breathed (Jordan not Doggie), we put Doggie in the crib. By the time Jordan was 2, Doggie was a permanent part of her life. For a while Doggie went everywhere that Jordan went, but by the time she was seven or eight she stayed home and provided nighttime companionship.

This more limited time together was not an indication of less importance. In fact, quite the opposite. It was more to protect the friend than to distance from her. It took a long time for me to realize that Doggie had a gender, but everytime I referred to her as “him” or “he”, Jordan would get indignant and yell, “Mom, SHE has ribbons in her hair!” This was obviously before she was comfortable with the concept of cross-dressing acquaintances. 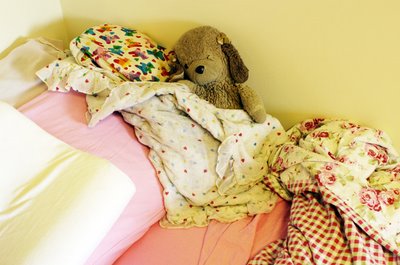 Doggie B and Pillow, hanging out on Jordan's bed at school

When Jordan went to sleep away camp – Stage Door Manor – she left Doggie home. They had never been separated but David and I had gone to look at the camp in the Spring before Jordan’s summer adventure began. It was a dump. True, it had not yet been cleaned and polished for the soon to attend campers, but it was a dump. It was an old Catskills hotel. Even when it was new it was probably not elegant, but it had seen many summers of active theater kids who lived 5 in a hotel double room with one bathroom. I cried all the way home, wailing about how stupid we had been to agree to send her. But she had decided that she wanted to go to theater camp, she found the ad in the NY Times magazine, she called the 800 number and got the promotional tape and she was excited beyond belief. So how could we say no? And now, how could we say yes?

It was too late. She was going to Loch Sheldrake for three weeks. (The Loch instead of Lake was supposed to indicate that it was classy). But when our packing was almost complete I looked at Doggie and had visions of the fluffy beast being kidnapped and destroyed or simply lying under a pile of dirty, really dirty, girls clothes and underwear. In her wisdom, and all by herself, Jordan decided that Doggie was not going to camp. She would be temporarily replaced by Black Panther, who was not, at two years old, as fragile as Doggie, now going on 10. “Mom”, she said, “I think Doggie should stay home and keep you company. I know you’ll be lonely without me so Doggie will be there to take care of you.”

Did I mention Pillow and Blankie? Also purchased before she was a year old, pillow (which was actually two pillows) and blankie were a critical part of the sleep team. And not a small part. And we did have a number of horrible incidents with them. On one occasion we left blankie in a hotel on Martha’s Vineyard The next day when the reality of the loss became apparent, we called and asked them to look for it. They found and rescued it from the trash. But there was no small amount of hysteria involved from realization to rescue. And then there was the time Maria put Doggie in the wash, causing her nose to melt and the stuffing to flatten considerably, but that in no way impacted on Jordan’s need or love for them. 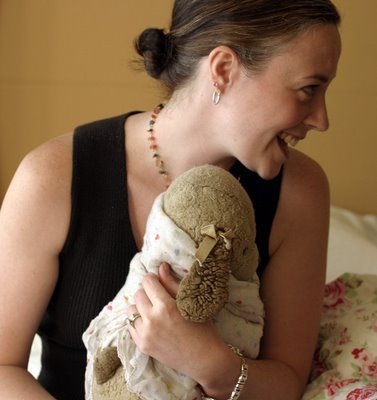 Joyce (pregnant, and due this spring) practices holding Doggie. B

When Jordan left for college, Doggie, blankie and pillow were definitely on the pack to go list. Somehow this enormous life change and beginning of adulthood did not include saying goodbye to her friends. So I carefully bathed (by hand) the tender trio. You see, they are not just items, they really are friends. 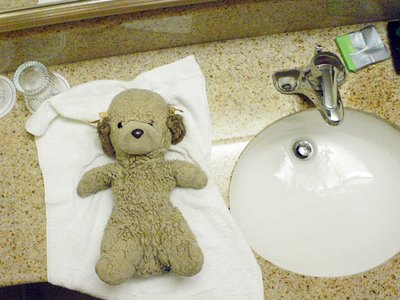 Doggie B., after today's Thanksgiving Bath

And not just Jordan’s. David and I have come to think of them as part of our family. How lucky she is to have consistent, unconditional, life long affection. And how much comfort we find in the fact that the friends are always with Jordan to give comfort and support. 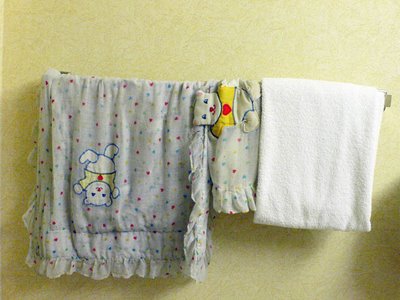 Blankie, resting after an annual hand-laundering

Jordan is soon going to be 21 so there’s not much chance that she’ll decide to banish them for any reason. I just hope whoever she marries is prepared to be a quintet. We’re just sayin... Iris
Posted by Iris&David at 11:21 PM