Recently, just last Friday as a matter of fact, I came into the City with the family for a post-Thanksgiving day in Gotham. The girls all went to see Spring Awakening (go see it, they say!) and I was left to try and find someone to have dinner with (or stay home and read read read.) I was checking my email on the laptop at the apartment about 430pm, and saw a couple of names on my ‘buddy list’ who I thought just might be free for dinner, and who I hadn’t seen for a while.

The first was a Washington Post photographer, and while it was unlikely she would be in the city (she is everywhere BUT New York), I sent her a little “how are you – what ya doing for dinner tonight” msg on the AIM. (I must be the longest running client of AOL, at least 15 years… having been, I assume, recruited on the fone by Steve Case himself when the Berlin Wall was still up.) After a minute, she msg’ed back “I’m in Iraq. “ It threw me for a mild loop, but I thought, we can be anywhere, and online, so I guess it’s not such a big deal. She told me how things were there (dangerous), how the picture taking was (difficult), and that she’d be back in a few weeks, and that yes, our little 2004 Electoral Group (a half dozen photogs who covered the elections) should all meet in December so we can critique each other’s Contest entries. But for now, there she was, embedded with soldiers, covering a difficult story, trying to work that balance between risk and reward.

I looked down the Buddy list, and saw another young photographer, Chris Hondros, who I also met and spent time with in the ’04 campaign. Out went the message: “Hey Chris, if you’re in the city, let’s grab dinner tonight.” Moments later back came the message --which I have begun to believe is on the Paste function of a lot of good, young photographers -- “I’m in Baghdad.” No dinner there, Dave! I thought to myself. I wished him well, and then let him go as he was, as it turned out, sending pictures back to the states. In fact on Saturday’s TIMES, he had the front page.

I tried one other photog who I missed on IM , but had a phone number for. He didn’t answer, and I left the message “… Ron, I suspect you’re in Iraq, but if you aren’t give me a shout….” Well he was gone, too, just not in Iraq.

What is the point? Other than grabbing a quick bite at the local diner, I started to think about the way the world has changed and sped itself up. When I was a young photographer working in Vietnam, the concept of Instant Messaging would have been wackier than Buck Rogers’ ray guns. From Quang Tri, we had enough trouble sitting on poor quality military phones yelling “break break, Dragon, give me Saigon!” or some other equally inane screaming fit, in order to get the least intelligible call out of some rat infested press center up north. We lived and worked in a way that the quality of Time had its own imprint. Instead of beaming pictures back from Quang Tri on my laptop, I’d take the precious exposed film film out of my camera – of a picture I did on a Monday, and find a pigeon headed to Saigon that night (i.e. a reporter headed back with at least one empty pocket in his jacket). The next day, the film would be put on the Panam RoundTheWorld flight to New York, and arrive sometime Wednesday at JFK. There it would be picked up by a motorcyclist, and weaved through VanWyck Expressway traffic to the Time-Life labs downtown. Thursday, the film and contact sheets would arrive on the desk of the assigning editor. They’d order a few prints, and sometime Friday, the picture would be sent off to Chicago, for the “magazine close,” a mere five days after the picture had been seen, captured and saved on film. What happened in those five days? For one thing, the editors in New York had a built in “study time” to try and figure out just what the Monday events meant in the longer run. We also felt we needed to try and make pictures that would be good enough to last a week. There was, of course, no CNN or Fox News, nothing like that to artificially speed up the velocity of news like we have now. It wasn’t a bad thing to have a wait a few days to sort things out. 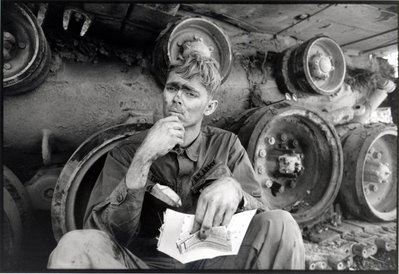 Rather like the air going over the top of an airplane wing, the faster news goes, the less pressure, less weight it creates. The TV/internet mantra of “Live and in color” isn’t necessarily bigger and better. It’s certainly not “truer.” Take a little time. Think about it before you react. Let it digest. You may not be able to find someone to take to dinner, but at least by next week, you’ll have some vague idea of what happened today. We’re just sayin. David
Posted by Iris&David at 7:12 PM

Your "clarvardage" was informative if not successful...at the least when you are by yourself you're in good company...

Amen,Brother..sometimes it's just yourself..You reminded me of days chasing down the fedex guy,tackiling him to the ground to make a flight to make deadline. We know THAT's in the past! For sure, what is in the past, is still there, but certainly the best dinner companion is yourself and the emmories of those you love..even if thousands of miles away..

Generic Viagra (sildenafil citrate; brand names include: Aphrodil / Edegra / Erasmo / Penegra / Revatio / Supra / Zwagra) is an effective treatment for erectile dysfunction regardless of the cause or duration of the problem or the age of the patient.
Sildenafil Citrate is the active ingredient used to treat erectile dysfunction (impotence) in men. It can help men who have erectile dysfunction get and sustain an erection when they are sexually excited.
Generic Viagra is manufactured in accordance with World Health Organization standards and guidelines (WHO-GMP). Also you can find on our sites.
Generic Viagra is made with thorough reverse engineering for the sildenafil citrate molecule - a totally different process of making sildenafil and its reaction. That is why it takes effect in 15 minutes compared to other drugs which take 30-40 minutes to take effect.
[b][/b]
Even in the most sexually liberated and self-satisfied of nations, many people still yearn to burn more, to feel ready for bedding no matter what the clock says and to desire their partner of 23 years as much as they did when their love was brand new.
The market is saturated with books on how to revive a flagging libido or spice up monotonous sex, and sex therapists say “lack of desire” is one of the most common complaints they hear from patients, particularly women.