An Anniversary of Events.... 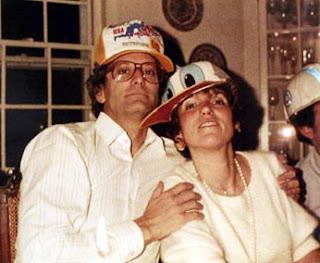 It is our 35th wedding anniversary.  We are not together, but that is not unusual.  In all the years we’ve been married, the actual days of holidays have become less important because with whom do you celebrate. So we celebrate when we can, and it doesn’t have to be on any special day.  It is easier that way and nobody’s heart gets broken.  That being said, right before David and I met he was in Iran and I was elevated by the White House to accompany the Vice Premiers of China on a whirlwind trip to see the US.  After the opening to China during the Nixon years, it was Jimmy Carter who really moved it forward.  Two highlights of that super special assignment was taking Deng Xiaoping  (the leader of the delegation) to a rodeo.  He loved it and finally rode around the arena wearing  an oversized cowboy hat in a stagecoach.  The other event was taking the other Vice chairman Fang Yi to Los Angeles to visit Disneyland. After many negotiations, we got into the park before it opened.  We all disembarked from the bus (another story). The Chinese Delegation, about 8 of them, were excited beyond excited. (That’s the only way to describe it.) And who was there to greet us but two enormous mice, dressed up like Mickey and Minnie —because they were Mickey and Minnie.

Fang, (we became very good friends), was didn’t even come up to their shoulders, so when he turned around and saw these colorful characters, he totally freaked out.  My guess is that they may know about Disney Characters in China, but not 10 foot tall characters.   Once they settled their nerves the Delegation went on all the rides and ate all kinds of American crap.  Remember, it was 1979 and we had just normalized relations with the Chinese — thank you Jimmy Carter.

Anyway,  we left Disney and took the delegation back to their hotel where they could sightsee, rest, pass Communist secrets, and get ready for dinner at Mayor Bradley’s house in LA. When they were in DC they had a private dinner at Sec. Brzezinski’s where, mama Brzezinski  - who didn’t believe in caterers -  prepared the meal and clean-up was left to thee children.  Needless to say, the Chinese delegation had no idea what to expect  but they did expect to get to the Mayor’s residence — which almost didn’t happen.

We got the delegation on the bus and I handed the driver the address.  He looked at it and said,  “I have no idea what where this is.”  Remember there were no cell phones and certainly no GPS, (how did we survive)?  I thought this was strange, and said to the guy,  “How could you not know where this is?”    He looked at me like I was nuts and said, “I’m not from LA.”

Time was passing and finally I got off the bus and stopped several strangers just walking along the street, and asked them if they knew how to get to the Mayor’s house ( I did provide the address). A nice young man, who found the predicament more than amusing, decided to help us — if he could meet the amayor and have some dinner. We agreed to his terms and off we went.

Here’s the take from of all of this: Drivers who work for national bus companies do not necessarily come from the city in which they are driving.

While I was traveling with the Chinese delegation, David was in Iran welcoming the Ayatollah Khomeini home. Both adventures were memorable Carter policies.  One successful for many years and the other was the reason the President did not get reelected.  Politics and policies, neither is predictable in terms of international consequences.  But at least President Carter was smart and educatedand had a sense of history about governing and making policy.  Neither of which you can say about the big fat turkey sitting in the White House.   We’re just sayin’…. Iris

First, let me wish you both happy anniversary (a day late). Second, had to let you know what a coincidence to read this as I was watching 'Morning Joe' this morning (or was it yesterday, not sure, but that's what happens when we get our age), where Joe and Mika were reminiscing over that dinner at her parent's house with the Chinese delegation. What a surprise to know that you were so closely involved with all that history. What a life you and Dave have lived! I absolutely love your blog - keep it up as it's my (and other's) peek inside history and your fascinating lives.
--Jon

Happy Anniversary!! It was refreshing to read your Blog. You and David have both play key roles in many lives around the world. Most of all, myc family and I would like to say thank you for also playing a role in ourselves equally. Happy Anniversary once again!