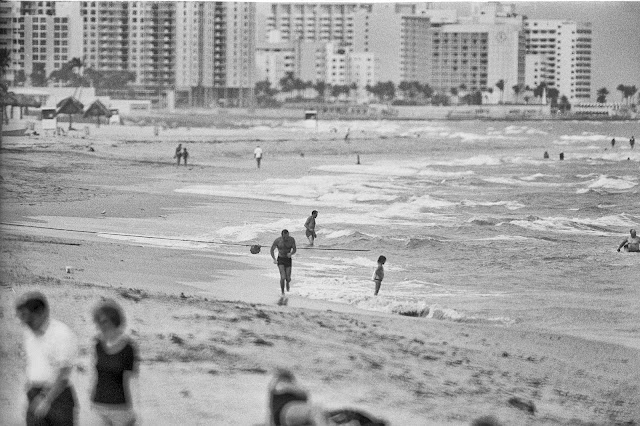 The weather today took me back oh so many years. First it rained, then there was sun, and it was windy. It would forever be in my mind, a Florida weather day.

When I was a kid we moved to Miami Beach. We lived in South Beach, at 1610-1612 Pennsylvania Ave,  (which is a condo now, and for sale), but it was not the South Beach of today. It was an area loaded with old Jewish folks sitting on the porches of old hotels like the Delano.  Everyone had a grandma who spent the winter on one of those porches. Sadie was a colorful grandma who did kibbutz on the porch but she was also an unpaid entertainer in dining room.  Whenever she saw a stage she jumped on it  because she knew she belonged on it, telling jokes and singing songs.  Sometimes I would go watch her.  There was no meal for me in the dining room, but after the show she would bring me dessert. Often it was cookies but one time it was jello wrapped in a paper napkin. It was the gesture that counted, that and the fact that she could tell all her friends how generous she was.

Walking to school was usually uneventful unless it rained. The streets would flood so we walked in water that covered well above our ankles. At the beginning of the year we would bring towels to class so we could dry off when this happened.  The hallways of the school were outside and uncovered. When it rained we walked through the water to get to our classes.  School  was always an adventure, and certainly a change for those of us from the north.  At that time the Florida divorce laws were easy, so there were quite a few kids from the north whose parents were getting a divorce.  In fact, there was a couple who lived next door who must have been getting a divorce because whenever the dad would stop by there was terrible screaming and fighting. Their child, who went to our school and with whom I walked every day, was always angry. She hardly ever smiled.  It was a whole new world of commonplace events that were difficult to understand.

When the rain ended it was often cloudy and windy.  The wind was tropical, warm and strong.  The combination of the rain, clouds, and wind is what is most memorable about that one year.  It felt like it was a almost a meal: for breakfast there was rain, followed by a quick clean up.  For lunch there were clouds swiftly moving across the sky, and for dinner there was the wind wrapping around every person who dared to tangle with it. Speaking of tangling, how about these playoff games?!  Yes, the second game was deja vu from the first, but how enormously stupid is it not to play an entire quarter instead of sudden death. What it means is that whoever wins the coin toss is bound to win the game.

Back to my year in Florida. We were there because my parents felt the heat and warmth would be good for my dad. He had MS so they spent a great dal of time looking for a cure.  Sometimes it was a few days, or weeks. Most of the time they left me and my baby brother, (the golden child) with my aunts,  but because Florida was an extended stay they took us with them.  Jeffrey  was too young for school and there was no day care or nursery school. Even if there had been he would not go.  It is unclear what he did all day but he was good at entertaining himself.  Even as young children we were pretty self sufficient kids.  This was good practice for the lives we chose.  Let’s not dwell on abandonment issues.  We loved the beach and lived close enough to go there whenever possible.

Many relatives came to visit. That was a refreshing change except when our newly married cousins stayed upstairs but in the same building.  The fighting was dreadful and you couldn’t help but wonder, even as children,why they ever got married.  Our other family visitors were good humored and delighted to be in a sunny climate. In those days you could also go to Cuba to gamble and go to the horse track. My aunts and uncles loved the horse track, the dog track and jai alai. It was always a treat to accompany one of them to the betting window to place a bet for us— especially since we didn’t have to give them any money.

There are still things that ring true of that year — the smell of sun tan gel, Aunt Fritzie reminding us that we could get a sunburn even if there were clouds, and taking us to game night to play Bingo.  Mom always smiling—probably the last time the smile was more prominent than the anger.   And of course the rain, clouds, sun and wind.

Friends tell me they hate Florida because it’s mostly old people who can’t drive and are rude in restaurants.  Really, I say, “have you looked in the mirror lately?”  The rude and the bad driving can be avoided but getting out of the snow —priceless.   We're just sayin'...  Iris