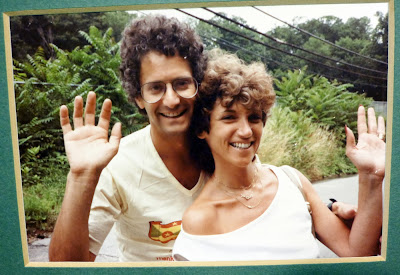 Sure, last night was New Years Eve, but more importantly, the We’re Just Sayin… team celebrated the 30th anniversary of the day we got engaged.  30 years, who would ever have believed that we would last 30 years.  David asked me what I wanted to do to celebrate this momentus ocassion. When we lived in Virginia, we would have gone out for dim sum with as many friends as possible.  And that’s what I wanted to do. (We have no friends in Newburgh, just family and that works very well.   I apologize, David may have friends here, he, like our puppy, wants to meet and find some good, everywhere he goes). But that’s not what I want to blob about. So we went to Washington and although we didn’t tell anyone, we had a secret (it was our secret)  anniversary party with our friends, at our favorite Dim Sum restaurant. We knew that not all our dear friends would be able to make it so we made separate stops to see them.

We had been together and apart for five years prior to that night. It’s unclear what happened that made him ask me to marry him, (except at Germaine’s suggestion I took everything that he had left at my house, and dropped it off at his one of his good friends. I usually say that I packed it up and threw it out on the street. And while that sounds much more dramatic, I lived near Dupont Circle and in those days it wasn’t as upscale as it is today.  For example, I paid the drunks who hung out at the corner liquor store to watch Seth when he crossed the street to go to McDonalds.

Anyway, I thought that was the end of a long and tumultuous five years. But not so fast, Fanny. (No idea where I came up with Fanny—it just sounded poetic.)  He was away on one of those “Days in a Life…” books. I think it was a Day in the Life of Hawaii.  Maybe he spent too much time in the sun, because when he came back, he took me to Georgetown and proposed – there was no diamond exchanged, that came later.

That evening we had a New Years party at Germaine’s restaurant.  David had made some 3X5 cards, on which he announced our engagement. He handed the cards to Dave Kennerly and said, “I’m going to say whatever is on those cards in Japanese, (no he doesn’t speak Japanese, so you can only imagine), and you read the translation in English.”   Yes it was hilarious, but no one, including Kennerly had any idea of what was to come. On the last card he said that I had accepted his proposal of marriage.  Here’s what’s important, we were not kids and we knew if we waited to get married for more than 3 weeks, we would talk ourselves out of it.  But the third weekend was the Superbowl – so we actually had to wait 4 weeks. Getting married was an excellent decision.

Last night (New Years Eve), we had dinner with family and reenacted the proposal. Yes, David spoke -- or didn’t speak -- Japanese, and everyone enjoyed the presentation—I hope.

"Happy New Year"  is something people just say when the year changes. It is a nicety. What of instead of "Happy New Year" we said something a little more substantive, like, "this year I intend to make your life happier by (fill in the blank).”

It's just a thought.  Now I have to make a plan about how to do that.  We’re just sayin’…Iris
Posted by Iris&David at 8:52 PM