“The Boys on the Bus,”  by Timothy Crouse, was a book that everyone, even with the slightest interest in politics, wanted to read because it talked about the political reporters who covered campaigns.  It was written as a piece for “Rolling Stone” in 1972,  back in the days when politics was fun. The article, soon to be a book, explained who these “characters” were and why they were important in the overall picture of election politics.  As a young aspiring political hack, everything in that book fascinated me.  It was a time when there were media buyers, campaign gurus, and advertising people who did strategy and created media campaigns for political aspirants, but politics was not a career. You did not go to school for it.  If you wanted to work in politics you majored in journalism, political science or history.  The only real study you could do was on the road with a campaign.  Politics for the professionals was just something you worked on like any other product.  In a world where the heroes were winning elected officials, the political press was, as they say,  (who ever they are, a breath of not exactly)  fresh air – but they were a colorful lot.  Among the most colorful of the characters on that “Bus”, were Hunter Thompson, Johnny Apple and, Jack Germond – who, just to give you an idea, wrote  his political memoir and called it  “Fat Man in A Middle Seat.” 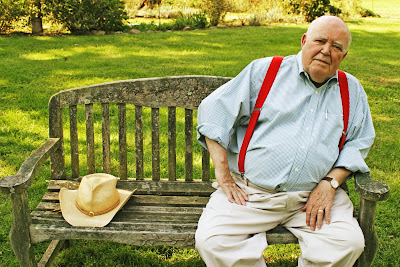 Jack, at home in West Virginia, and, as he liked to remind you, only minutes from the Track
Jack died on August 14, 2013.  And although he was eighty-five and hadn’t been on that “Bus” for many years, it was a terrible loss for the world of real political journalism (as opposed to bloggers, news readers, and entertainers who call themselves journalists.)

Campaigns, until the 80’s were such that the political staffers, reporters, the Secret Service, and even the Candidate were not enemies.  They all had a job to do but the relationships were not necessarily adversarial. At night, after a long day of events, everyone went to the bar, talked about that day, and tried to make the next day’s events so enticing that every reporter and photographer would want to cover that campaign.

Although I had worked on the McGovern Campaign in 1972 (in Mass. where we won!), my first full time political job, was the Udall Campaign in 1976. In those days the staff was told to be anonymous – if anyone saw your picture in the paper, you would lose your job.  It was not easy to be anonymous when your success depended on a relationship with the press.  Most of these guys (and there were very few women), were pretty normal for people who were never in the same place for more than a day or two – except Hunter Thompson to whom I once said hello, and he fled as if I had threatened him with a knife. It was about 3am the first time I actually spoke to Jack. It was a long day, I was starving (we were always starving because we didn’t have the money or time to eat). He came over and sat down with me. I was so excited, I was almost afraid to speak. “Hello, Mr Germond,” I said. And he said “I know who you are, you look hungry.”

“Well,” he said, “I know a place where we can get you something to eat.”

We walked through alleys, up and down staircases, through tunnels and finally, some where in Philadelphia, we reached a place that had hot dogs on the bar.  It wasn’t exactly a bar, nor was it a restaurant, but they were the best hot dogs I have ever tasted, and I was with Jack Germond, who knew my name.  It was wonderful.

Jack knew a place wherever we traveled, and I was often invited to come along.  I had almost meals, with Jack, Haynes Johnson, Johnny Apple, Bill Boyarsky, a campaign novice named Charlie Gibson and often every writer on the bus.  Jack had rules (called the Germond rules) like--  no matter what you ate, (be it a steak or a hot dog), everyone paid equally – except the invited campaign staff, because we never had any money.  Or, he would tell anyone who asked a question, “I’m not talking til’ I get my martini.”   To tell one or two Jack stories minimalises how great a gentleman he was.

We spoke often between campaigns. When I was teaching at American University he graciously accepted an invitation to lecture in my classes.  We had an occasional dinner (I never paid, even when I had money), and he taught me to drink martinis.  As a pundit, he was a brilliant strategist – but he knew very few political strategists would listen, let alone take his sage advice.  But Candidates would listen and if Jack criticized what they did, the whole staff heard about it.

How do you say goodbye to someone who had so much impact on your personal and professional life. You don’t. You just drink a martini to his memory and be thankful that  he knew your name. We’re just sayin….Iris
Posted by Iris&David at 12:44 PM