There is a reason that the TD Bank has become the bank of choice for many people -- including yours truly.  It’s not that it’s open on days when other banks have locked their doors (open on Sunday) .  It’s not that they are pet friendly, which they are, (go have a dog biscuit, or take one home for your pup).  It’s not that you can bring all your random coins and for free, yes for free (no additional fees), they will turn your coins into paper.  And it’s not that the staff is lovely and patient with those of us who have weird requests.  No, those things are all attractive, but not the reason for their popularity.  So what’s the reason?

It’s all about the TD pens.  You cannot walk into any store, hotel, or organization, without seeing that everyone is using a TD pen.  It took me a few weeks to notice the plethora of TD bank pens, but  when I finally did I was pleased and impressed.  What a marketing tool. People don’t even realize that they are using the pens, but when they do, or are looking for a bank, it’s the first place they think about.

My brain is in pause.  I can’t answer simple questions or remember simple facts.  I have been ensured that everyone I know is going through the same thing.  This does not make me feel better.  Sure, when other people I’m with,  forget or actually can’t remember the same kind of things I forget, I can feel a part of a large group of elderly citizens, but let’s face it Yechhhhhh!

I am told that as long as I know I can’t remember anything, I am just fine.   But the people who are in charge of the telling are all our age and trying to comfort themselves with the knowledge that they are not alone.

Last week, when we were in Rancho Mirage (I wrote about it, so listen up), our Aunt celebrated her 100th birthday.  It was a joyful occasion.  Can you imagine living a century.  But there is never any good news without a little bad.  A year ago, her daughter Carol died of complications from Breast cancer. And last Saturday, our cousin and friend, Howard, finally lost his long battle with diabetes.  When he was 15 he was diagnosed.  He pretty much ignored the rules and lived exactly as he wanted to. He was warned, he was lectured, he was whatever... but it wasn’t until a few years ago that it took it’s toll.  He lost his feet, then his legs, then his life.  When we saw him at the birthday celebration he looked a little frail, but still feisty.  He went to the dentist last weekend and , although his wife was a bit concerned about the blood thinners and his teeth, he came through it like a champ.  In fact, he was much better than he had been.  And they were talking and laughing, getting ready to watch a movie,  when he turned his head --- and was gone. 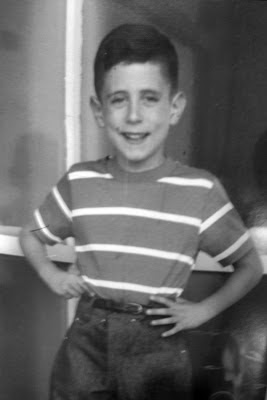 We loved Howard.  He and David grew up like brothers, they just had so much fun talking about all the times they bonded (over the Maltese Falcon) and not necessarily just Salt Lake Stories.  We will miss him sooooo much.  Even though he mumbled, we could always figure out what he was saying. ( “God Damnit Howad” no R,) the family would say.  “What will we do without having you to share some serious laughs.?  What we will do is miss him a lot, and simply pretend he is in Scottsdale.  If you live East you go to Florida.  West you go to Scottsdale, and trust me, It’s so much more desirable than thinking you will never see them again.  (There are 80 golf courses in Scottsdale, and it will no doubt take him at least six months to play them all.) 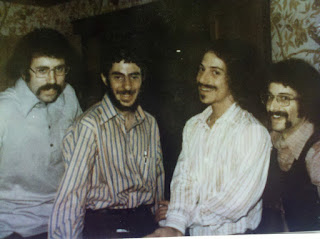 the cousins (ca. 1977): Howard, Nate, Bob, David
My brain is still in pause, but I am saddened by all the dearest people we have lost.  I always wondered which would be worse, having a sound body and no memory,  or having all your memory but a body that just wouldn’t work.  It’s times like this that I only want to remember the good;  and the loss -- can just go jump off a bridge.  Were just sayin’… Iris