The Man, the Ghost, the Legend

For people who were in love during the 70’s, there was no more important composer/entertainer, than Barry Manilow.  The songs were easy to sing. And every song he sang reminded you about a time or person in your life who made an indelible impact.  Among the songs that was most memorable for me was “Mandy.”  Because it was a song I shared with my 2 year old son. He would find his little portable record player and put it on.  I would listen and weep.  He curled up in my lap and sang along with me and cried.  Neither of us had any idea why we were crying, but he played it over and over until we were both cried out. 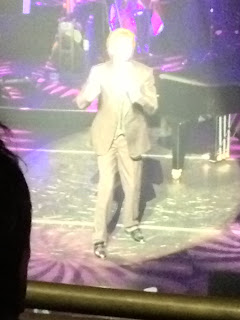 "the man, the ghost, the legend..."
That being said, last night my lifelong dear friend and I went to a Barry Manilow concert, on Broadway.  It’s at the St. James Theater, a smaller venue.  The producers were so smart. There was never an announcement about recording or taking pictures, because the lighting was such that it was impossible to take a picture where you could actually see the great Mr Manilow.  Along with the picture taking and recording, people know the  words to every song and they sing , while he sings, but louder.  He did invite the audience to join him on a few songs but the woman behind us didn’t need an invitation.  The tickets were expensive. But  you pay the price if you want to hear him sing –which he still does quite well despite the fact that he has had so much surgery  he cannot open his mouth.  I was about to ask this rude woman, with a horrible voice, why she would pay to hear herself sing.  It would have been cheaper (and certainly more pleasant for us) to  buy an album and sing anywhere she wanted – other than at the St. James.  Believe or not, I did not do that.  She was drunk and wanted to have a fight. I had no desire to make her happy.

Most of the audience was well behaved.  Hard to imagine that people wouldn’t behave – it wasn’t a rock concert. They had “we love you” signs, and teary responses to some of what he sang and said.

Who goes to a Barry Manilow concert?  Not who I expected.  Mostly couples out for a romantic evening, middle aged women, gay guys, and lots and lots of young women who must have sat on their mother’s lap while she cried her memories to sleep.

Every once in a while, this kind of evening serves as a reminder for how important it is to have friends with whom you share memories.  And how full your younger life was,  and your older life continues to be.  We’re just sayin’…. Iris