I just wish I’d known it would be that easy. Some things just fall into place. Others, well they need a little work. A little concentration, a little effort. When I first signed on for the Yearbook (the “Olympian”) staff in high school, I was 15 years old, looking for , as my mom reminded me any number of times, something that would qualify as an ‘extra-curricular’ activity if I had any hope of actually getting into college. You couldn’t simply own a decent GPA, attend classes dutifully, and hope to be able to get into a good school. As a member of the first class of the Baby-Boomers, competition was fiercer (more fierce?) than we ever thought it could be. So I suppose I had secondary interests in the back of my mind when they accepted my yearbook application, and I had to fill in which staff I thought would be appropriate for me: Literary, Business, Art, and Photography. I ticked off – in a negative way – each of the first three, and ended up, with some ambivalence, as Photography got my vote. I had no idea what it would entail, but it was the least uninteresting of the lot. When I finally received word weeks later that I was accepted on the Photo staff, I was excited to see what it was all about. I was a pretty good Chemistry and Physics student (yes, I could fire a steel ball-bearing from a spring on a bench, and calculate how far it would go before it hit the floor – oh, that gravitational constant!) The first day of school the following autumn found me with several other newbies in the darkroom with our advisor , Mr. Blackham ( a rotund but very game Math teacher) huddled around a not yet antique Omega enlarger, watching him project a picture of the French club onto a sheet of white photo paper. His hands moved in a few phantom patterns (I would eventually discover what burning and dodging was ) over the photo paper, and then the enlarger light went dark. Mr. Blackham then lifted the paper out of the easel and slid it into the Dektol. In a room bathed in the yellow glow of a safe-light, I saw my very first photographic image appear, magically, like some kind of sorcerer’s alchemy, on that piece of photo paper. No tongs for him, Mr. Blackham reached in and grabbed a corner of the picture…. Shaking it gently, as the tones slowly went from light to dark gray, and some to black. It really was magic. 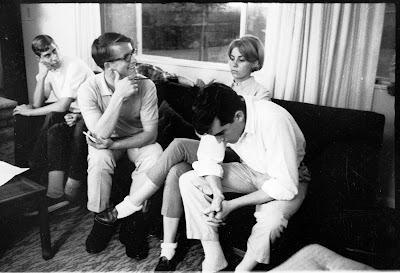 a school crisis, the "leadership meets," 1964
A few days later, I was given a roll of Tri-x and a Rollei, and told to go shoot a Friday afternoon football game. I wandered out to the field, looking around, trying to figure out where to stand, how to hold the camera, when it dawned on me I had NO idea how to set it. In one of those scurrying moves, where you can feel the sweat starting to ooze through your pores, I raced through the halls of school, trying to find George Carmen, one of those kids whose dad had gotten him started in photography in Jr. High, and who I knew would be able to guide me in the mysterious world of Shutter Speed and Aperture. 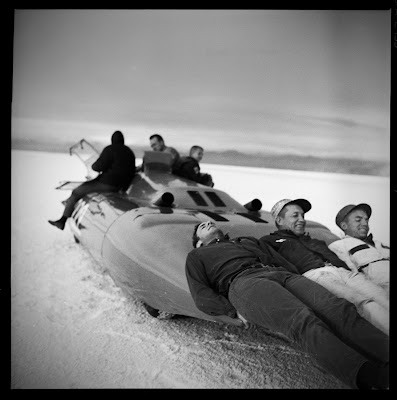 the Graham Special at the Salt Flats, 1963
When I finally did find him…. he helped me set both, and back I went to the game. It was one of my first days as --- dare I say it – a photographer. And if you carry on the idea of what I was doing that day, it might have even been my first day being a photojournalist. I don’t think I was even aware of what ‘photojournalist’ meant or implied. Sure, like most families we subscribed to LIFE and LOOK, those magazine stalwarts of photographic storydom. The twenties and thirties saw the birth of photo magazines, first in Germany, and England, and later in the U.S. The idea of taking cameras out of the drawing room, and using them to photograph actual “things and events” was quite new. It was the birth of what would become Photojournalism. And let’s face it, there is a bit more cachet to ‘photojournalist’.. working on a ‘reportage’ than a photographer working on a mundane ‘assignment.’ 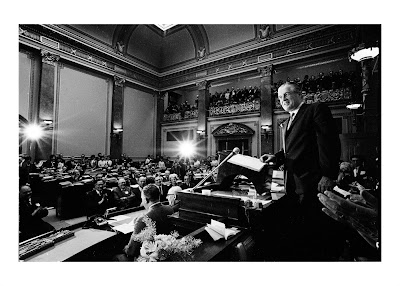 George Romney (Mitt's dad) speaks about his Presidential aspirations to the Utah Legislature, 1967
In the beginning I counted myself among the latter, until sometime in college – my Senior year after I’d had a summer internship with TIME in New York – some snotty NewEnglander kid a bit my junior was explaining that his older brother was busy creating, as his Locust Valley Lockjaw might have put it, “reh-pour-TAHZE.” I had to admit that his way of putting it made it sound pretty cool. It took years, of course, for the rest of the world, and the rest of the business to use “reportage” on a daily basis. I still feel a little funny when I use the word “reportage” but, it sounds way too groovy not to. 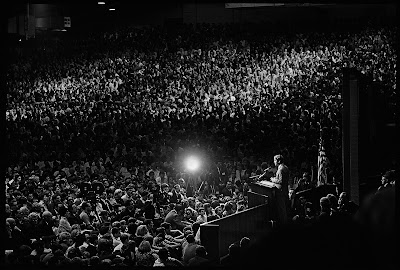 All of which leads me to think, that given my forty plus years of photographing ( O M G, next year it will be fifty! Don’t tell anyone!) and feeling that even now as I’m learning something about my chosen field everyday, that this is a world of unending possibilities. I write this on a plane flying across the country, and in the seat pocket in front of me, are copies of Pop Photo, and Shutterbug. There are a zillion cool things inside of each, little techniques, little hints of things yet undiscovered. You never really know it all. Every day is full of new possibilities, new ways of expanding your personal vision. So it was all the more amusing when I recently received in my email inbox one of those updates from LinkedIn, that crazy, billion dollar company (how did THAT happen?) which advised me that one of my LinkedIn contacts had updated their profile, and added “Photojournalist” to their list of talents. Apparently they are already working as a photojournalist somehow, somewhere, but forgot to mention it when they filled out their profile. The most amusing part of the message was the imploring by LinkedIn, to me, that I add the talent “Photojournalist” to my own profile, and that it would … well.. make me a Photojournalist. Damn, I had no idea it was that easy. Just add it to your list of attributes and you’re IN. Like many of the misunderstandings which clouded my early days in the photo world the lights went on more quickly than I could keep up with them. In 1969, when I moved to Miami to be the TIME contract photographer based in the SouthEast/Caribbean, I had a card printed up. I had already poached what I thought was a cool line from Norm Betts, an AP shooter I’d met the previous winter. My card read

“Matthew Brady is alive and well, and living in Argentina”

Oh, there was a phone number on there as well, and so I thought that once I’d printed up my card, and started passing them out, the phone would start to ring off the bloody hook with offers to shoot hither and yon. In fact, nothing was more frighteningly silent than my phone. It just refused to ring. But hey, I was a photojournalist. Eventually, thank God, things slowly began to change, and my career grew as I started to understand what it took to connect with editors, and make pictures which would be worth looking at. 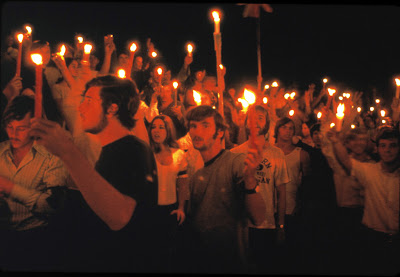 the Vietnam "Moratorium" in Miami, 1969
Recently, we were saddened by the passing of Jim Atherton, who worked in Washington DC for UPI, and later the Washington Post. He spent decades shooting the pants off young’uns like me. Jim Atherton was one of those guys who really got it. He understood that elusive point where life intersects with the camera. That in fact, for the most part, we “make” pictures, not “take” them. We do all that is necessary to get our viewfinders in the perfect place where the pushing of the shutter button creates that moment in time, frozen forever. Unlike the rookies like me, who would arrive early, and look around at a Senate hearing room, trying to figure out how to spend the next three or four hours squatting on a knee-high bench, looking for some key image of a semi-famous person, Atherton would make the rounds of the Capital, usually arriving somewhere in hour 3 or 4. While the rest of us had so tired of looking, so fatigued we could barely see any longer, Jim would walk into a room, and like a sniper hunting his target, peer though his squinted eyes, sum it all up in a few minutes, and just BE where he had to be, to get a picture the rest of us usually missed altogether. Bang! Another time I’ve been knicked by Jim Atherton. He did it time and again, never settling for the obvious. 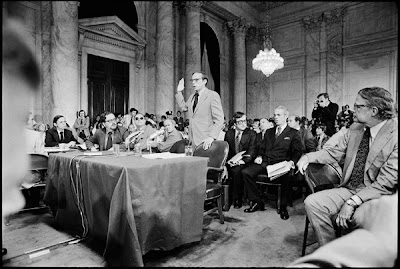 John Dean being sworn in at the Watergate hearings (1973), Jim Atherton bouncing in on the right for his exclusive
Atherton was a special breed. He apparently more than once corrected someone who called him a ‘photojournalist,’ saying that no, he was a News Photographer. He imbued the idea of “News Photographer” with something special, and though I doubt he was ever on LinkedIn (what, really would have been the point?) he was the quintessential definition of the term. It was his years of perceptive seeing, and listening, and watching and knowing. You couldn’t just add that talent to your resumé. No, it’s just not that easy. We’re just sayin’…. David
Posted by Iris&David at 3:54 PM

Just watched http://www.takepart.com/pageone
photography was not part of it. just wondering. Virginia