Here we are at a kid’s fourth birthday party. Lots of aunts, uncles, and cousins. Not many little children celebrating the double birthday, but there appear to be four, each expected by their proud parents to out do the other with a memorized poem, song or story. The mothers watch with eyes glowing, almost teary. The dads are trying to figure out why they are in party hats instead of golf shoes.

There is an infrequent fight over whose turn it is to ride the metal pony, but it is quickly over when it is time for another performance. The kids, anything but ordinary to their parents, seem to be having a pretty good time. There is however, one exceptionally bright (and incredibly cute) little boy who seems to excel at poetry recitation. Although not the youngest of the children, certainly the most dapper. His outfit, a white shirt, bow tie, blue shorts & socks, are child model worthy ... His parents own a men's clothing store, but that's not what makes him extraordinary. It is, rather, his three year old's determination to excel -- even without parental pressure. 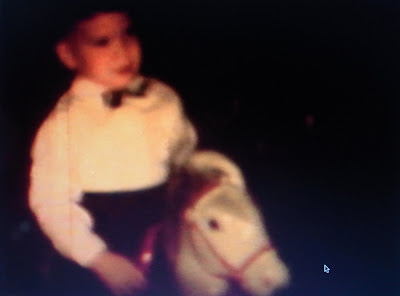 Yesterday, I saw that same determination as Justice Andy Hurwitz, nominated by President Obama for a seat on the Federal Courts, testified before a distinguished Senate Judiciary panel. His wife Sally, younger brother Gary (now a Mandy Patamkin look alike), and his wife Holly, me and a few friends sat in the peanut gallery while Andy took questions from the Senators. There was no “gotcha” attitude although we were told later that there are a few Senators who hold up nominations simply because it’s what they do. But there were no softballs. They asked questions about judicial decisions he made in the past (unlike those asked on Friday nights after a game at Paul’s Diner), his answers were cogent, reasonable, articulate and thoughtful. 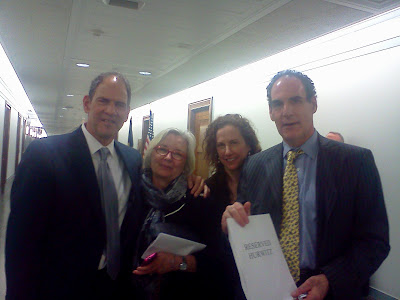 
It was a wonderful proud moment for all of us who were there, for all the old friends who were not, and for all our parents watching down on us. I’m glad I didn’t kill him when he tried to get on my metal horse. He has made the world a better place to be. And given me a good reason to vote for (as opposed to against), President Obama. We’re just sayin’… Iris
Posted by Iris&David at 10:30 AM

I haven't seen Gary since high school - thanks for the pics. Wish I could have been there.
Reeder

Remember me? I have enjoyed your "blob" for quite sometime now and especially your Boonton references. What a thrill to read about Andy! Evanna Baldwin Murray

Loved reading about Andy Hurwitz. A blast from the past. I remember us all together as kids. It was great to hear such good news! Glad you could be there.