Hike it to ME! 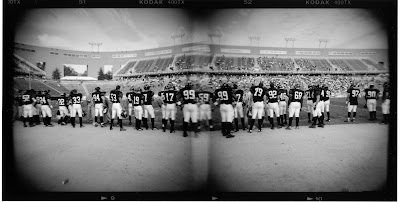 With football season coming to an end, I do have a confession. I will miss it. Over the years my loyalties to different teams have changed, and now come full circle, but like many people who love watching the game, if it’s a good game I just like to watch it.

Some people think my adoration for the game can be credited to my high school boyfriend, who eventually played for Miami, in the Super Bowl-- several times. But this is not true. Although I did drool over him long before I liked the game, I continued to like the game even when he married someone else and even when he wasn’t involved.

There was a time, in fact, when we had Patriots season tickets, first when they played at Harvard Stadium, then at Boston College, and finally in the old Pats Stadium, (which I might add, was horrible). In those years, when the Pats played the Dolphins (and usually lost), my high school beau would get a sideline pass for my X. He and a few of the players would come over to my house the night before the game and have dinner—usually pizza and scotch, because we were very poor. One dinner is even mentioned in a book the hero wrote, when he recounted how, during a particularly nasty rainy game, he reminded the guys who had been to dinner to “keep their mouths shut when they got tackled, because it would be a crime to ruin the good scotch.”

The truth is, I like to root for someone. If there is a direct connection even in college football , (my niece went to Michigan and my best friend and ‘ludafisk’ sister lived in Wisconsin), but the connect has simply provided me with an excuse to pick one team over the other. Some team that allows me to yell at the TV. My male friends always thought my football watching behavior was obscene because I behaved in exactly the way they did – cursing when there was a bad call, muttering when I was unhappy, jumping up and down, and screaming when the team did something good—or bad.
As I said, I just like the game.

And I love that my grandchildren 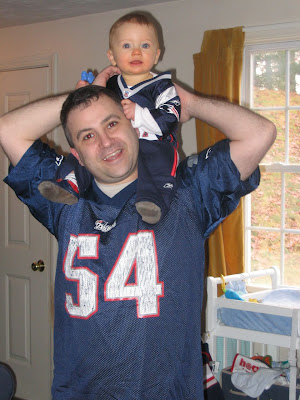 and my friends grandchildren get as excited as the rest of us – what joy, what pain, what purpose. 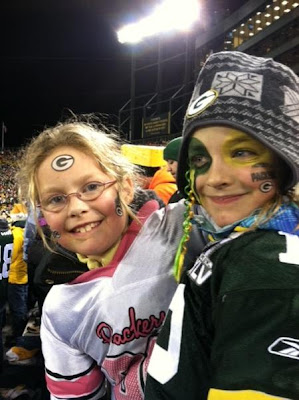 So what’s going to happen tomorrow, in the final games before the Super Bowl (which, for whatever reason, is hardly ever a good game). It’s a silly question. Last week I rooted for Green Bay. That was an embarrassing game. While I wanted them to win, I didn’t mind that they lost to the Giants. Because, I want to see the match between Giants and the Pats go to the Big Game, starring – yes… Madonna! Then, I am rooting that the Pats will have the victory they deserved (yes, and screwed up), in the last match between the two. This forces me to watch the game alone or take a great deal of crap from my New York family. But this is the price one has to pay for loyalty – and remember, the joys of full circle. Oh, and because I’m easy, if the Pats lose tomorrow, my heart won’t be in it but, I will be behind those Giants at least 65% -- in honor of all my NY cousins. We’re just sayin’…. Iris
Posted by Iris&David at 7:05 PM