You just have to listen to the news for five minutes to realize that the world we now live in bears increasingly less resemblance to the 60s and 70s. Curiously, about the only continuity I can think of is that Ghadaffi is still in power (he came along in a coup in 1969.) Not sure for how much longer. But, voila, there he is. And aside from Castro, you have to give Ghadaffi credit on one point. The Queen of England has been in power for nearly sixty years, and nobody besides Lyndon Larouche seems to be complaining about her tenure. Well there are those anti-monarchists in Scotland, but I don’t unfortunately break haggis with those folks often enough to get a personal rant from that p.o.v. But more importantly, there are those little tags in our daily lives, the ones of literature, film, and television which to be the links to those eras just passed. 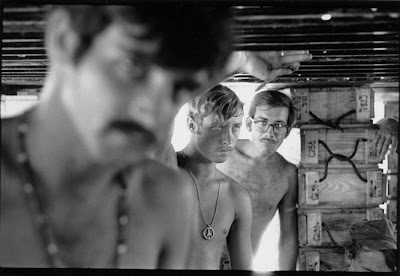 Language has its funny way of telling you more than you think. Little phrases take on meaning far beyond the letters of their words. They become secret acess panels which, once opened, let you walk into a place of comfort and communication, enabling you to trade in the currency of a certain time, with a number of like minded people. Sometimes the phrases become little codes: their acknowledgement opens a place for you that you might have not otherwise been welcomed to. The one incalculable here is time. Things come and go, and amazingly, we seldom ever know the sources from which they come. I mean at some point you can say ‘Right On!’ was a product of the turbulent sixties, with marches in the street, young (mostly) marchers with clenched fists in the air, speaking to what they perceived as their own cause for justice. But who was the first person that actually put “right” and “on” together, and created that bellwether? (Iris says she remembers it originally as “Right on, brother,” from a poetic African American…) I don’t think we will ever know. And how did it spread so quickly? Obviously some copy cat who heard it thought it resonated, and just grabbed it and made it their own. Within weeks , it became one of the great rallying cries of the anti-war movement. And within months, it crossed social boundaries much like a fast spreading virulent virus, and became an almost everyday platitude, thereby losing its effectiveness as shock value. I was never more amazed than sometime in the early 70s, when a coat-and-tie Deputy Chief of Correspondents for TIME Magazine, a smart and lovely guy who well understood the politics of the world, was used to picking up the fone to move correspondents around from hot spot to hot spot like pieces on a chess board, but who seemed more at home over a three martini lunch than a tightly rolled joint, looked me in the eye one day, and said “right on.” He kind of said it in the same tone he’d have used while ordering a second martini. The displacement between the meaning of the words, and the man uttering them was so out of place, that it probably made far more of an impression than if he’d put a fist in the air and yelled it at me. 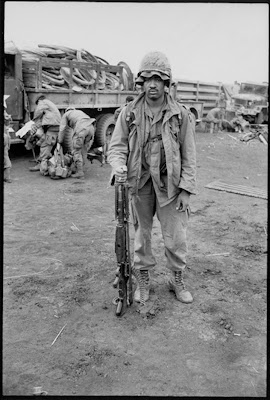 I did once ask my mom about her memories of “Oh, you kid!” a phrase popular in the 30s, and one which, like “Right on!” probably meant something very different at the time than we think it does now. I don’t’ even know which word gets the emphasis… “oh” or “kid.” And what the hell does it mean? I still don’t know. But it sounds cool, especially if you’re Dick Powell in a white linen suit.

What made me think about all this today was the single most popular line used by the millions of young Americans who served in Vietnam. It was something which existed virtually only in the firebases and basecamps with young GIs. And as near as I could ever tell, once those young guys boarded a freedom bird to leave the ‘Nam and head back to the ‘world’ the phrase seemed to just disappear. “There it is.”

“There it is….” There is what? you ask. And just where IS ‘there?’ Well no sense in trying to read too much into it. “There it is…” said with a flat tone, mildly strong emphasis building up to “is” was the one lingua franca which all GIs shared. Well, officers, not so much. But if you were under the age of 25, had been drafted, and didn’t particularly want to BE in Vietnam, “there it is” was your key to sanity. The three words which let you express your profound emotional mélange of disgust, annoyance, fear, despair, surprise, acceptance, satisfaction, and occasionally contentment. Once I arrived in Saigon in October, 1970 and began a two year interaction with the world the American GI, it was a phrase which meant so little, yet so much. You could almost say that it meant whatever you wanted it to mean, and be interpreted almost any way. It often just served as a coda in conversation. It was the comment which had the force of finality in a discussion where soldiers were otherwise unable to explain something. “There it is…” was a way of just saying, ‘yeah, that’s how it is here, and this is how we have to deal with it.’ What has always surprised me is that once back home, the phrase seemed to disappear. The context for its usage was gone. Without the very personal, very weird, perplexing, illogical elements of the war lived first hand, it seemed to no longer have a proper context. 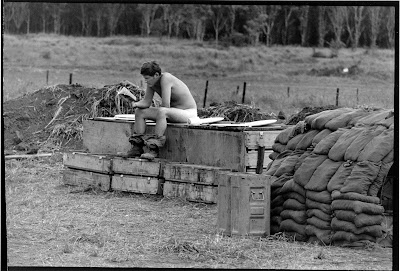 Along with a few other everyday Vietnam-related phrases like “shit burning” (yes folks, when you lived on a remote firebase, every few days someone would be assigned the task of pouring some flammable substance on the receptacle barrels on the two-holer, and set it alight. And yes, shit burns) once you returned home it just fell out of disuse. I suppose you could do a drop by at a Legion hall in Wichita or Missoula and ask someone drinking a long-neck at the bar when he last heard the phrase “there it is” and you could have a whole evening’s discussion. I'd love to know what today's GIs in Afghanistan have created as their version of "there it is." But I wouldn't be surprized if it gets left at Bagram Air Base, along with the other contraband stuff you're not allowed to bring home. But living in this madcap world of today, there are moments when it seems quite apropos.

Charlie Sheen is off drugs and booze and has a medical report to prove it. There it is!

The people in the streets of Cairo really rocked the world or politics. There it is!

Gas prices are clearly a product of oil companies ripping us off. There it is!

The Wisconsin’s Governor is just trying to use the budget crisis to bust the unions. There it is!

You wanna taste the best thing that ever crossed your lips.. a Zero candy bar. There it is!

I have clear memories of "Solid" as a word of approval or agreement moving through my high school in the mid-70s. I was unaware of its origins at the time (I believe now it was out of the African American music scene, as so many other terms like that were), but looking back, it's particularly amusing because the school was an expensive Catholic prep school in the DC suburbs...

Don't hear "solid" at all anymore.

I think the expression that you might hear today instead of
"there it is" is "it is what it is." I first heard it from a good
friend who spend a bit of time as a guest in a
CA federal prison (long story. suffice it to say he
survived). I have heard it a few times since. Mostly
on the streets here in NYC.

"There it is" was a phrase that had a lot of good uses. Sometimes it was simply a non-judgemental courtesy given to someone who uttered any sort of cynical statement. You didn't have to agree or disagree, you (or someone) just had to say, "there it is."

And sometimes, "there it is" was an acknowlegement given to a real insight into something.

If it was said in response to a real insight, there was an additional thing that needed to be said by a third party. And that third thing was, "But it don't mean nuthin'..."

The "conversation" was then finished with a final round of, "There it is"

For films, only Hamburger Hill uses it. For almost everyone, it just goes over their heads, but forus vets, we are transported to another galaxy long long ago, and feel that warm pleasure of immense nostalgia. There it is!

I just found your blog when I was looking up some information on the phrase "There it is." I'm an officer in the US Army and I am prior enlisted. I've been reading a lot of books on the Vietnam War lately and have come across the phrase a number of times. In my ten years in the Army, I've never heard it used and it is fascinating to me.

I hope you don't mind, but I quoted this blog on my own blog and used one of your pictures (which I think captures the sentiment behind the phrase perfectly!).

One of the things that draws me to reading about Vietnam is the language and culture of our own Army - which at times seems so familiar and other times so foreign. Language seemed to be so important, and I'd hate for people to forget.

I'm 41 years past being an enlisted man. So why do I still say, "Fuckin' A!" occasionally?