A Child by Any Other Name

As I have done in the past, maybe even yesterday, I will write in order of very good to shame on you!
We welcomed Jake Raymond Gatsik, to the world at 11:20am on Sunday – amidst many Purim carnivals and the excitement of many members of their family. Parents, Jonathan and Beth, are doing fine. Baby is terrific. About 7 pounds and 21 inches, I am told he is skinny but has big feet. Need I say, he is adorable, I think not – the child has an exceptional gene line. Only wish his Great Grandma Elaine had been alive to kvell (something every Jewish parent, grandparent and great grandparent does). Well, we will all have to make sure that we do her proud with our kvelling.

After our trip to the armory for the photo show, we discovered a new restaurant in the neighborhood, Cabana Nueva. We sat at a table for two. On one side was a table of six young women just having a great time. On the other side was an empty table, and on the other side of that table, there was a father in his late twenties (maybe early thirties), with his four year old son. I knew he was four because he acted just like my little Z (also four). They came in just after we did. The father (not actually an adult), was texting when he came in. He told his son to sit down, but without looking up from his iPhone. He used that tone – the one that suggests the child sit down and shut up and not bother him. The child, we’ll call him Kenny, sat right down. The father continued to text. Kenny played with the silverware, fork, knife, and with the napkin. Dad continued to text, and Kenny moved over to the table next to us and proceeded to play with the lit candle on the table. The father didn’t notice. “Honey”, I said, “It’s not a good idea to play with fire.” Kenny looked at me like, “why are you speaking to me, no one else does.”

David was getting upset about the lack of communication between father and son, “I want to say something,” he told me. “Don’t bother,” I said, “this is a guy who snapped his finger at the waiter and hasn’t done anything but order his kid two virgin (I hope) pina coladas – nothing to eat and nothing with which to entertain himself. So Kenny found amusement in lying full out on the table bench, where he kicked some ladies purse and finally fell off, hitting his shoulder and his head. 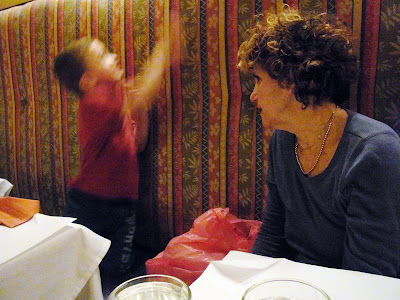 He cried and dad momentarily got off the phone. “I told you not to do that”, he said. Put him back down, and got back on the phone. It took Kenny about five minutes before he was moving around again. Then, he was momentarily distracted by the arrival of some dinner. It was really momentarily because the dinner was something that dad wanted, but there wasn’t any conversation with his dad about what he might like, so he lost interest in, as I said, five minutes. Dad was still texting when Kenny moved over to the table next to us once again.

“Hi, what’s your name? And how old are you?” I said, holding up three, five, and then four fingers. He chose the four. “What?” he said. And I responded exactly as I do with Z “What,” I repeated in exactly the same tone. We did that back and forth for a while. “What’s your name?” I asked. He told me and asked who David was. “Poppie” I said. “NO” he shouted, and I realized that he must also have a Poppie. “Not your Poppie,” I said, his Poppie, and we showed him a picture of Z. He was delighted to have people paying some attention to him. He got so excited that he knocked my water over.
Dad finally put the phone down. “I told you not to do play”, he shouted. “Whenever you don’t listen to me, something like this happens.”

Kenny went back to his own table, we covered our table with some napkins, and soon after they left – dad still on the phone. “Goodbye, Poppie,” Kenny said, looking at us like he was losing his only water in the desert.

Shame on you, we said, but not loud enough that dad would hear and the punish Kenny. There was a article in the Times this weekend about parents with whom their children are estranged. One woman, whose Dad after years of not being in touch, wanted to be her Facebook friend. She refused Dad, and like Kenny, just wanted a bit of attention, before it was too late. We’re just sayin’…. Iris
Posted by Iris&David at 11:20 PM

Having a child should be harder than getting a driver's license. Clearly young Kenny drew a short straw.

Wish we were there to play with him. He and Z would have been fast friends...but we are not courageous enough to go out to dinner with the munchkins unless in a big group. We know they are kids who like to play, jump, scream and are basically tornadoes who leave a path of destruction in their wake. Kids are kids and I like mine just that way. They will get older and we will all go out to eat but for now I am happy with take out, especially from Frankie D's bbq! : ) Love you! Joyce

That's a thoughtful response Joyce. It opens the thought for a kid friendly place with a rubber floor and lined in plastic. Us parents could put on Haz-Mat suits and enjoy the fun!

Geesh I feel my adoption will be even further delayed now...