Peppy, Pesha, Pearl, Pepafonic, Pepalicious, Pep, all endearing names, which at one time or another, someone somewhere has called my mother's twin sister, and other half. Last week we got a call from her daughter to say she was in the hospital. Needless to say, all the cousins were concerned because, she is quite a phenomenon and she is also the last of the Dubroff siblings. There were eight of them. Seven female and one male. Rosie and Peppy were fraternal twins and the youngest of all the children. She is the family memory. The last Indian standing. But stand she does - I'll get back to that.

As with most twins, they had a special connection. When my mother had a pain in her leg, I knew aunt Peppy probably bumped her leg. When Aunt Peppy had a headache, my mother also felt the unexplained pain. When my parents had an argument my cousin Eden (eldest of Peppy's kids) would call and say her mother was in a bad mood and picking a fight with her father. There reactions to situations which involved food was usually identical, (both thinking they were great chefs and experts on all things Jewish), but we secretly called my mother Delores Defrost, because she would cook in the morning, freeze whatever, and defrost it for dinner. Aunt Peppy actually had fresh vegetables and even salad, but many things were so heavy, more than a taste would kill you. They did, as do we all, make identical tuna salad.

That's where the twin thing ended. Aunt Peppy is a balabusta (real Jewish homemaker). She cooked and cleaned and scrubbed and prayed, kept kosher, honored the Sabbath, and ran every organization of which she was a member. Rosie did not do any of these things. When she cooked, it was always a mess. Usually my Aunt Helene, or Aunt Sophie would trail after her with a wet rag trying to keep the muddle under control. Shopping and returning were her favorite exercise - oh and buying crappy jewelry. She belonged to the Boonton Jewish Center for the social life, and always wore something that sparkled.
They were as different as they were alike, a nice combination of a total person.

On Saturday, when Peppy returned from the hospital, I took a little three hour ride to visit with her. Her ankles are a bit swollen but she said that she was fine before she went to the hospital - which made her sick, and she was fine when she got home. She is supposed to use oxygen, but like her twin, refuses to wear it if there are other people around. (Did I mention that having their hair and nails done, was always of primary importance.) When I got to her apartment I couldn't figure out the confusing directions about how to enter. Finally, a four year old, who saw me wandering aimlessly, said she thought I probably wanted the apartment with the "thing" on the door, (the mezuzah). 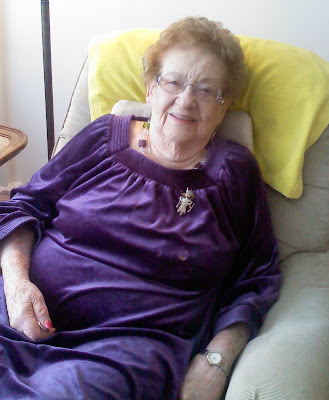 We spent a few emotional and wonderful hours talking about my mother's headstone, (I wanted her to check the Hebrew on the engraving), and she told me that she wanted "She had a wonderful life" on her tombstone. I told her that since it was not the wild west, she would probably have a headstone as well .... But not yet. Peppy has always believed that God has a plan for every person. That everyone has a certain amount of time to live. No doctors, tests, or predictions make any difference. It was what all the sisters believed, and they had such strength of character, that you never felt frightened about what lie ahead. That's not the end of my story. On Sunday my cousins Stevie and Billy went to visit her. They also had a difficult time getting in and also had no idea about the apartment number. After fifteen minutes of frustrating encounter with the door and location, they called the apartment. "We're here but we're lost", they told her aide. "Ok
Be right down, stand near the elevator". They followed instruction and when the door opened there was 90 year old Aunt Peppy, with her walker, all dressed up for company." 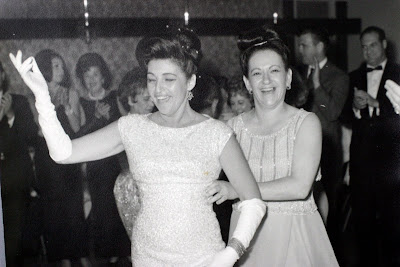 the twins in action
"There's nothing wrong with me", she told them. "Why wouldn't I greet my company."
And she was right. We were all concerned and incapable of following simple instructions, but she certainly is allright. We’re just sayin’….Iris
Posted by Iris&David at 12:51 AM