We all know people who wait until the last minute to make decisions about whether or not to accept invitations the they receive, because they are always waiting for the ‘best’ offer, before they decide how to spend their time. There was a time when I referred to them as “bestoptioners”. They waited until all the options were presented and then the one they felt was the best option was the one they accepted.

The technology has made it even easier to wait until the last minute to make a plan. For example, when it’s Thursday and I ask my kids what their plans are for the weekend, they look at me like I’m nuts. “It’s not the weekend yet, Ma. How do we know what we’re doing?” I am not opposed to last minute tasks, but there are times when it makes me crazy -- like getting to the movies, a meeting or the airport last minute. 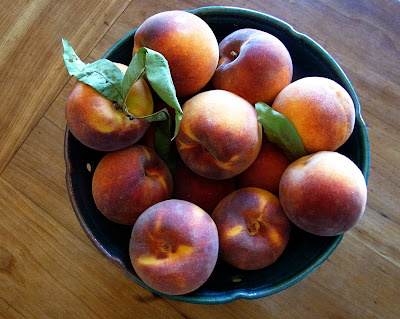 Last Minute: Peachy keen
Having lived in the DC Metropolitan area for many years, last minute was not something socially acceptable. In Washington, people never stop doing business. They go to work, then they may go out to a cocktail party (where they work), and then they go to dinner (where guess what.) On the weekends, they want to relax and plan their schedules around what would advance their career, or their yard, so plans are made long in advance.

OK, maybe I’m exaggerating a little. Our friends knew we were never able to get ourselves together, so if we called and invited them over, at the last minute – they were neither surprised nor insulted. But generally speaking, it’s not something I understand.

I guess, for me, there is a difference between waiting until you find the best option, and being spontaneous. That being said, planning something with friends that is last minute can be wonderful. As it was for the spontaneous Burnetts this weekend.

John and Anne and Jeanne and Jon 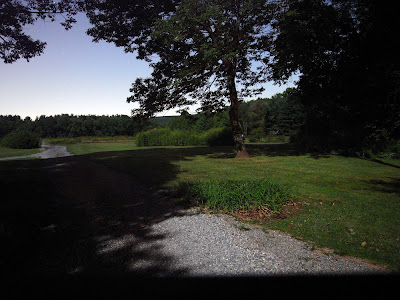 The Cutler's front yard, at midnight, lit by a very full moon (Ricoh GX200: 60sec. f/2.8)
There we were, driving what seemed like endlessly, from DC to NY. We got a late start, the traffic on 95 was terrible, and David was falling asleep at the wheel. Finally, we pulled off the road and had an iced coffee. At that point we realized we were on route 40, near Baltimore, and even though there are traffic lights, it was a stress free ride. Just before we reached Delaware we decided to call our pals, the Cutlers –who have been known to call us five minutes before they get to NY, to have dinner. We rang them and confessed that we were doing “a Cutler”, and we thought we would drop by for dinner and a good nights sleep. They couldn’t have been more gracious. We spent the evening, had a terrific dinner and a good nights sleep (Which, because they are night owls started at 2:30am). We got up, went out to breakfast – changing restaurants only once, and then made our way to our next location – The Plimptons of Princeton.

Having not actually made it back to NY, we arrived at the Pimptons, unshowered and with a dearth of clean underwear. Luckily, they are laid back and most understanding and we didn’t smell, much. We arrived mid afternoon, waited until 5pm to have a cocktail, had the best salad we’ve ever eaten, fell asleep at 10pm, awoke at 10am, had some good laughs, played with the too fabulous Lola (dog), and were on the road again. 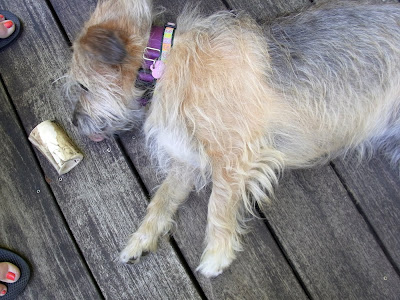 the fabulous, shoe nipping, hilarious and wonderful LOLA, with her masters' feet nearby
It was, as they say in 1930’s musicals, a grand two days – pretty last minute but without any hesitation by any of us. On the ride home we even decided to turn onto roads that we had absolutely no idea where they led. We’re determined to try last minute again –so watch out, if we have your address, you may be on our list. We’re just sayin’…. Iris
Posted by Iris&David at 9:15 PM