A few days ago, David and I were watching his 1990 video tape of the “Gefilte Fish Chronicles,” part I. Being from Salt Lake, he was always fascinated by the Battalion strength turnout shown by the Dubroffs when organizing a holiday get-together. It is a bit different than the 2005 version which you might know, because you never see any of the Seder, and the sound is a bit muffled (home video that was then state of that art.) That’s the bad news, but the good news is that you do see much more of the cooking and you hear stories about my Grandparents and family, no longer geographically located on earth.

Anyway, I don’t want this blob to be maudlin because Aunt Peppy says Shiva is over and it’s time to get up and move on. Anyway again, (pretend this is not repetitious), there is a great deal of talk about the past and who did what, when, and how. Like the fact that Grandpa apprenticed as a butcher when he was a young boy or maybe he learned to be butcher in the army. When he was a cook, or maybe he was the chef to the Czar. (There were the usual Dubroff sibling disagreements about time, place, and position).

What we do learn is about how the family weddings were paid for and some funny stories (funny now) about my Aunt Betty – the eldest child. The one who came across the ocean with my Grandmother, as a baby. All the other children were born in the US. When Betty got married, in Grandpa’s butcher store, it was so cold that the windows froze. However, when she and Uncle Lou walked around the candles (seven times), her veil caught fire and, after pulling it off and dousing her with water, her hair also froze. Or, if you are truly loyal fans, you may remember (from the Gefilte Fish Chronicles Cookbook) that Betty was credited with making her meatloaf with chicken. It is after all, a ‘meat’ of sorts. And it was delicious. But when someone wanted her meatloaf, and she didn’t have the time to make it, she would never refuse, she would simply delegate the task, sometimes to her treasured Bessie and sometimes to one of her sisters – never Uncle Jack.

After they left Brooklyn, four of the shtetl moved to Newburgh NY and four of them to Boonton NJ. This, however, did not prevent any of them from getting Bettyied. Aunt Peppy tells the story of how Aunt Betty was asked to be the Cub Scout leader of her son Harold’s troop, and she happily agreed. Then, the next morning she called Aunt Peppy and informed her that she was sure Peppy would enjoy the experience. Peppy laughingly recalls that she said “But Betty, I don’t even have sons,” and Betty simply assured her it wouldn’t matter. “But I didn’t know anything about boy things,” Peppy recalls. “So we all had a great time, but the Cubs never learned enough to become Boy Scouts.” Cousin Dick Zodikoff, life long pal of Harold's, and fellow Cub Scout, admits that at least once they "set the field on fire," and forced the Fire Department to save the day. Peppy's culpability has never been questioned, since, after all, boy things differed greatly (especially in the area of misdemeanors) from girl things. 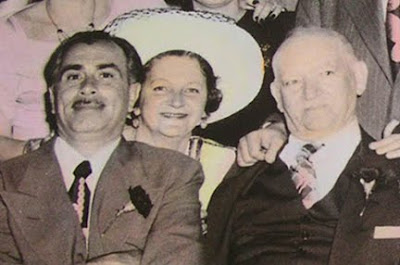 Betty, surrounded by husband Lou, and her Poppa.
When I was getting married and Aunt Betty wanted to buy my trousseau, we planned a day and time and the stores we would visit, and then she ‘Bettyied’ the job to my beautiful cousin Elaine. This of course, was wonderful, because Elaine was young, had little daughters, and very good taste. As my mother would have said, it “was what was.”

Being Bettyied was not only accepted, it was expected. It never mattered who got the job done, as long as it got done. Being Bettyied is usually fun and at the very least keeps us all connected. No one ever gets angry or upset about assignments. Although sometimes the assignment is not convenient or to our liking, it always gets done – often by Bettying someone else.

And yes, getting Bettyied has been passed down from generation to generation. For example, last week when my cousin Sheila needed some follow up done for a party, she called and Bettyied me to do it. Then she called me back and said “I just Bettyied you, and I am still laughing about it”.

Getting Bettyied, for any of us, is a loving tribute to the fact that we will not hesitate to help one another in any way possible. It is also a loving tribute to the Aunt who accepted any job, task, or assignment, and then immediately Bettyied it to someone on whom she knew she could always depend. And that’s the really nice thing about family. We’re just sayin’… Iris
Posted by Iris&David at 12:29 PM