The Baggage of Baggage

Isn’t it interesting to see how your packing a suitcase over the years has changed. It wasn’t long ago that I could travel in a little pink bag about the size of a small backpack. It is hard to remember what went into that bag, but I know I was gone for weeks at a time and, with the exception of formal attire, I always had what I needed.

There were also years when I packed a small suitcase (when you work in an international government agency a suitcase is much more seemly than a little pink bag), and filled it with clothing that was black and could be rolled. There was an occasional T-shirt included in case we had access to a fitness facility, and maybe one or two colorful (but never wrinkle-able) shirts and usually a black dress that could be dressed up or down. 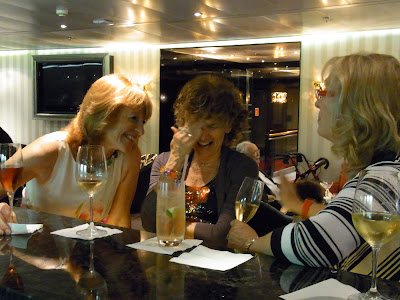 Drinks at the Stars Lounge, aboard the Navigator ... "elegant casual..."
When I was traveling with my boss, Joe Duffey, the Director of the once existant USIA, I never took more than I could carry. He however packed numbers of giant suitcases and filled them with books and papers, as well as clothing. When his wife traveled with us, she packed only a large bag but the combined load was so large that when we rode the fast train from Tokyo to Kyoto, I made everyone practice getting off the train quickly so we could exit with baggage before off before the doors closed. They close in what seems like less than a minute on those fast trains. I mentioned my concerns about over-packing to Joe as we were schlepping all our luggage from a small plane in the Swiss Alps, to a large plane in France. Need I say that there were no accommodations made to transfer us from one part of the airport to a departure point easily two miles from the site of our arrival. Joe agreed that he needed to think small. So he packed the same amount but in 7 or 8 smaller bags. Never mind, we had such fun it was never an issue.

We’ve just returned from a three week cruise on the Regent Navigator. It was absolutely phenomenal – the best way to travel long distances without any stress. (Exactly 5421 miles in 20 days.) When I packed for the trip I packed more than I have ever packed for any trip –personal or business. It was unclear what ‘elegant casual’ meant, and I didn’t want to embarrass Dr. Burnett, lecturer extraordinaire. Anyway, as soon we boarded the plane to go to Ft. Lauderdale, I realized I had made a mistake. There was, much like the airport adventure from the Swiss Alps, just too much for any two people without luggage sherpas to carry. It was too late to unpack and ship everything home, so I decided I would wear everything I brought. This was easy because “elegant casual” means you can wear anything but jeans, as long as you look nice. A shirt with a collar is indispensable. A most reasonable way to accommodate those sailors who no longer want to drip with diamonds every evening. And a wonderful way for me to make use of all the rags I own. And it was fun to dress up.

Yesterday, when we unpacked from the trip (and yes, I did have to ship a box of gifts I simply couldn’t carry), I had a kabitka, (which is, literally, a small canvas-topped Russian wagon, but I use it synonymously for ‘epiphany’—don’t ask). Anyway, my kabitka was about why we seem to pack four times what we did in the past. Admittedly, I overpacked, but forget clothing – I knew what I didn’t need, just not in a timely manner. It’s the medication and the hair products. Seriously, and I’m not exaggerating, I packed a medium size suitcase (one that would ordinarily hold two weeks worth of clothing) with hair crap, technology (a phone, computer, iPod, Kindle, a mechanism to listen to my books on tape), and daily medication. It was unbelievable. It just kept coming and coming. It seemed like endless amounts of stuff I never used 10 years ago. How did that happen? I can still pack a month’s worth of black stretchy clothing in one bag. But I can not leave home without at least another bag filled with stuff that previously didn’t exist as an essential.
Oh well. I still haven’t talked specifically about our adventure, but even Burnett was able to relax. We’re just sayin’…Iris
Posted by Iris&David at 12:06 AM