Dear “We’re Just Sayin” followers -- David and I apologize for the lack of blobbing over the past few months. (Here’s the ‘making excuses’ part of the program). What with my change in careers and suddenly producing five (potentially Broadway) musicals. 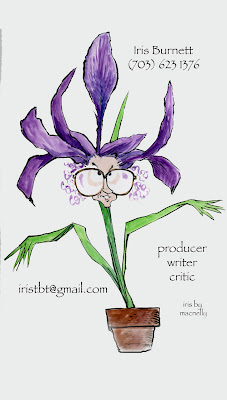 Iris' new business card, with thanks to Jeff M. who we miss...
David’s new books, “Soul Rebel” and “44 Days”, and Passover fast approaching, http://www.Gefiltefishchronicles.com/ (Please call your local PBS station and tell them it will be available Royalty FREE through NETA on March 21, we have been a bit overwhelmed with work, play, and our extraordinary popularity. That being said, I am now going to blob (whine) about my adventure in Arlingtonland.

It’s almost Valentines day and my pal Michael Berman has been hosting a Valentines day lunch for all his girlfriends, for thirty years. The group has increased in number from about 10 to 150. And while it’s not as intimate—nor do we get roaring drunk anymore – it’s always fun. We have been celebrating at the Four Seasons for the past few years, so I don’t have to tell you how wonderful the food is. In addition, Michael always gives us the best party favors (and if you’re lucky you can take the gorgeous flowers—like at a Bar Mitzvah.) This year the gift is a little hanger you use to hang your purse from the table, instead of putting it on the floor. (We are big ‘no bags on the bed’ people because if you put your purse, suitcase, or bag of any type on the floor of the subway, restaurant or theater, and then put it on your bed, God knows what you will be sleeping with. Anyway, these adorable devices prevent scuz from getting on your bag.

But where was I? Oh yes, overwhelmed. So, yesterday I planned to travel home to VA. Where you may recall, we had about two feet of snow. Most of the trains from NY to DC were cancelled and the only available seat was on something AMTRAK reorganized to leave at 2PM. This meant there was no way I could get home before dark. But so what. There was no choice. I wanted to go to Michael’s lunch. 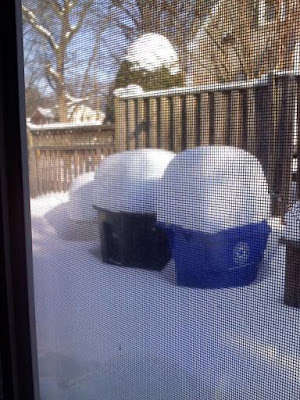 snow piled up on the trash cans
The streets from DC to VA. were plowed and, because the US Government was closed, there was no traffic. Oh joy! I thought, this isn’t going to be a nightmare. But when we reached 19th street and saw it wasn’t plowed, I told the cabbie I would walk the two blocks—yes carrying my stuff on the icy pavement. OK, I only fell once. When I arrived at my house I realized that in order to get in I would have to borrow a shovel and dig my way to the front door. That took two hours (There was a lot of snow). When at last I made it up the step and inside, I was wet and cold, which is probably why I didn’t realize there was no heat. I didn’t realize how cold it was downstairs, until I went up to my bedroom where the heat was working. 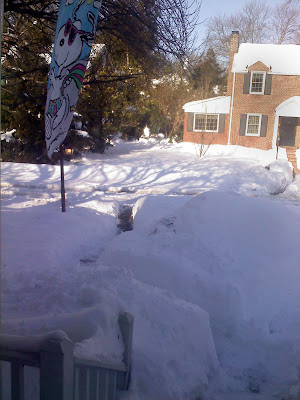 this would be the 'path' from house to street, like an English Maze
The heating people promised to send a technician between 12-4. Of course, the lunch was from 12-3. But since I had come back to go to the lunch, I was not about to miss it. And I’m delighted that I didn’t because luckily, the technician came at 4 – which is when I thought I better go buy some food. After three or four supermarket stops where there was no milk, eggs, bread, butter, greens, or any produce, I called Trader Joe’s. “Do you have any food in your store”, I asked. “Well, of course, we’re a grocery,” he said somewhat bewildered. Well so are all the Giants, and Safeways but they don’t have any food. (Nothing. Zip, nada.)

Enough whining. The heat is fixed, I have food and wine, and the plow has come through. All in all it’s been a colorful adventure I don’t need to have again. This really would have been a good storm to include the snowmen in the census. We’re just sayin’…. Iris
Posted by Iris&David at 1:22 AM

Coming by to say...whoa you really wanted lunch! I am going to order your Chronicles to enjoy and share with my neighbours. I think it is exactly what I wanted to learn about American culture but sadly haven't. I'm a transplant from Australia who finds herself living very very close by to Boonton of all places. What a wonder to come across your blog and be introduced to the world through your critical and talented eyes. And to find that we live in an area with which you are so familiar. Thank you
Corina

And thank you Corina. So glad you have discovered us...I'll try to keep you entertained