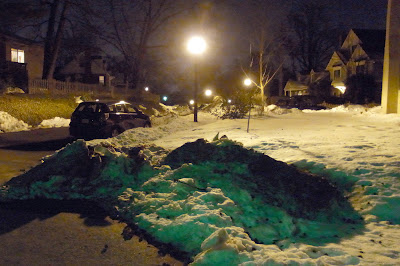 “The Lord Giveth and the Lord Taketh Away.” That’s how we described the snow removal in DC when I first lived in the District. What it meant was that we would see the roads and maybe our cars sometime in the Spring. Maybe Adrian Fenty is too young to remember that blizzard in the early 80’s, but it cost Marian Barry his job as Mayor. It wasn’t all because he was in LA having a great old time during the storm and maybe people were just tired of the same old politics, but for a combination of reasons he was outta there. 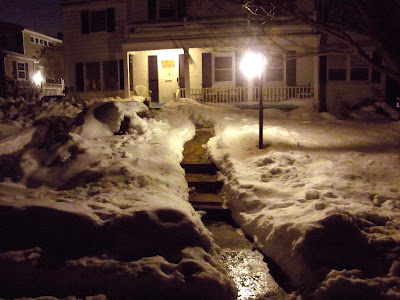 The Nation’s Capital remains paralyzed by this storm of all storms. – which happened well over a week ago. The Government and all the businesses closed. The snow remained where it fell, schools shut down and nobody went anywhere. That should have been the good news because it should have given the sanitation department the opportunity to use those plows attached to the trash trucks. But the only good news was that with the Government shut down, they couldn’t create any new problems with which the rest of the country would have to deal. The bad news was that despite the fact people stayed home, there was no snow removal. I choose my words quite carefully. The key in that sentence is removal. 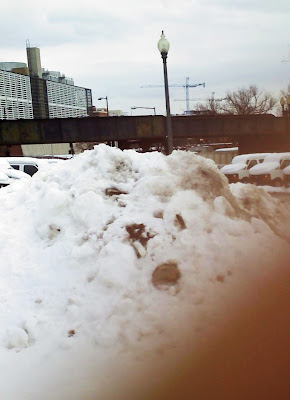 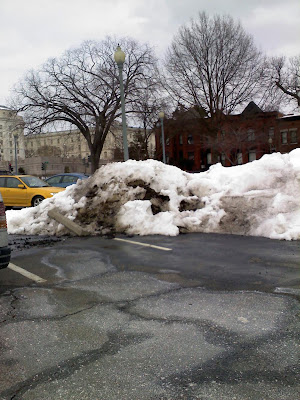 Stacked up snow in the Congressional Lot - foto by Iris Burnett
There were plows that appeared intermittently and pushed the snow around, rather than taking it away – like into the Potomac or some dump. But they left piles of snow in the middle of streets and blocking entrances and exits. Yesterday we had appointments on the Hill and even the parking for Congress people was limited and almost non-existent. The plows did manage to tear up the lots and leave big gaping holes, which didn’t help in terms of available space. There is almost no place in the city where you can fit two lanes of traffic, including a good portion of Capital Hill.

And the suburbs are not much better. The plows took one turn down each street and managed to clear some of the middle but blocked every driveway and sidewalk on the street. The inability for communties to provide services was disgraceful – and the only thing people could do was dig one another out of their own neighborhoods. (People 1, Government at all Levels 0.) But that’s the suburbs where people have cross-country skies and can remain somewhat good humored until they had to go back to work. – which happened yesterday. There are still schools closed for no reason other than the buses are plowed in (“so plow them out!” my mother would say.) But the city is still pretty much at a standstill—this time there are cars on the street but everything is standing still. Four lane roads are 2 and a half. Two lane roads are barely one.

What I don’t understand, and have never understood, is why DC and the surrounding areas are unprepared for the snow. It snows in these mid-Atlantic states. It snows every year and sometimes a great deal. How do they not budget for the weather? I get that it’s hard to prepare for a surprise attack or a hurricane, but snow flakes? What I also don’t understand (obviously there are many things) is why, when the streets were empty of people and cars, the snow wasn’t taken away—not just pushed over a little. 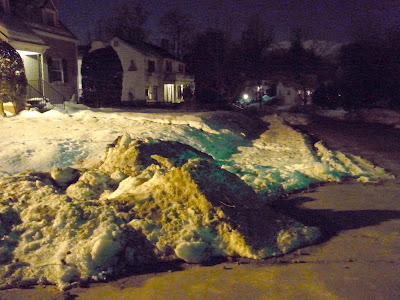 Snow which was not dumped into the Potomac
The Mayor was on TV the other night talking about the fact the there was no money for this dreaded event. He lives close to work so what does he care. If there is no money in the Capitol coffers, call out the National Guard. We haven’t sent them all to Iraq and Afghanistan have we? It is the Nation’s Capital. We pay for the Government to work. What could possibly be the misconnect between snow fall and snow remove? 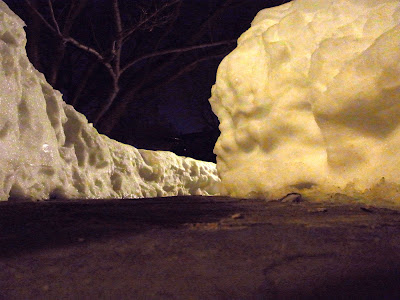 The Spring will come and maybe the snow will melt in the next few weeks, but what an embarrassing predicament this has become. Grab your shovel and come on down. I won’t be there but those elected officials could all use some help….and I mean that in the nicest possible way. We’re just sayin’... Iris

P.S. And if shoveling and plowing fails, grab lunch from the Greek Deli (19th & L n.w. in downtown D.C.) and just have a great bite while you watch the snow melt. 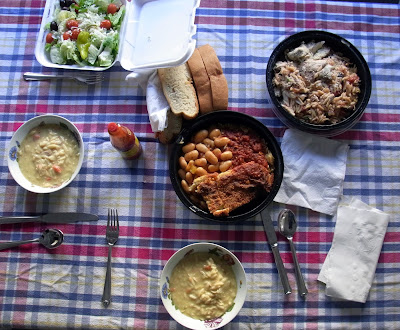 Good thing the boys from Boston have come to help remove the snow: http://www.boston.com/news/local/massachusetts/articles/2010/02/19/dc_digging_bostons_plowmen/

Love, love, LOVE your blog, and living in Northern
Virginia, I can COMPLETELY relate to the problems with the snow. Having grown up in South Dakota, I have seen how snow removal SHOULD be handled, but I do understand that this area is used to receiving an average snowfall of just 15", so I do try to cut 'em some slack. I'm also of the impression that Chris Matthews was far too harsh on D.C.; hell, the guy has never stuck his nose into D.C. politics until now, when it affected his commute. Figures.

Dumping the snow is environmentally irresponsible (even in the pristine waters of the Potomac), mostly b/c of all the oil, soot, sand, salt that accumulates on the plowed snow. Not an easy question to answer for sure.