The Power to Stay 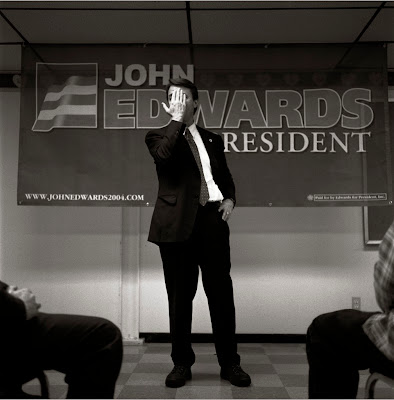 It's a heady place to be.
Unless you have worked on a Presidential campaign, and been close to the Candidate and their spouse, there is no way to explain  why Elizabeth Edwards would put up with what we now know is John Edwards' abhorrent behavior.  Do not think for one moment that I am making excuses for her, that’s not the case.  But when I hear Tina Brown talk about “what does it take to make someone leave their husband.  What was she thinking to stay?” my immediate reaction is “lady (Tina, not Elizabeth), you may know a great deal about many things but you haven’t got a clue about Presidential politics.”

What is important to know is that when you are a part of the inner circle,  of a Presidential campaign or Administration, you don’t think.  That might be a slight exaggeration, because you think about policy issues, political strategy, and logistics, but you don’t second guess the Principal because you believe he or she is extraordinary, and will make a difference in the world — for the better. At least you hope so.  And you respect the spouse, regardless of how whacky , because the Principal loves (likes, endures) them.

You work hard and want a victory for them and your self.  Andy Young (in his new literary exposé) says “I thought he would take care of me for the rest of my life, and he betrayed me.”  That sentence is more telling about what Presidential politics has become, than any campaign job description you can read. Although, I have been involved in nine Presidential campaigns, there was not one candidate who I thought would take care of me. It was my sincere belief that they would take care of the Nation.  Oh sure, when you work 24/7 for months and sometimes years, you hope that there is a positive result, but I can’t remember a time that I expected anyone would take care of me. 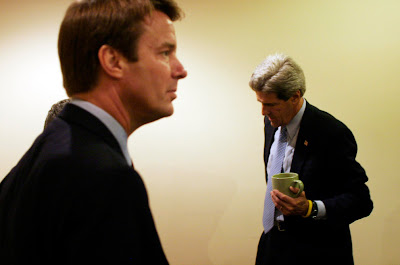 with John Kerry, 2004
There I go, digressing again.  This was supposed to be about Elizabeth and understanding, beyond the life long commitment she made to John, her health, and her children, what made her stay with him through all the public humiliation.  Running for President is a very ‘heady’ thing.  The candidate, spouse, and the inner circle (which can include strategists,  pollsters, policy wonks, sometimes advance people), begin to think they are exceptional or at the least that they deserve to be catered to and treated in some special way.  They become self important to a degree which cannot be explained as a simple personality disorder. They even print up jackets with their names embroidered on them. Mel Brooks said in the “History of the World Part One”, that “It’s Good to be King”, and that’s how this Presidential cadre begins to feel about themselves and this exhaulted position -- based on nothing but being hired to do a job.  In fact, some of the most exhaulted campaign people are seriously talent free – but that’s another blog.

Anyway, regardless of the amount of money you have, being President or even a candidate comes with an unimaginable power.  You begin to think that you are entitled to do anything you want to do.  And this entitlement often knows no bounds.  What’s the old saying,  “power corrupts...?”  It does and not only the Principal but all the people with whom they are surrounded — especially spouse.  When asked about his affair, his two hundred dollar haircuts, private planes etc., Edwards said he did it because he could.  Just that simple.  And Elizabeth also felt there were a great many “coulds”, and she wanted and enjoyed them  almost as much as John -- her vehicle to get them. 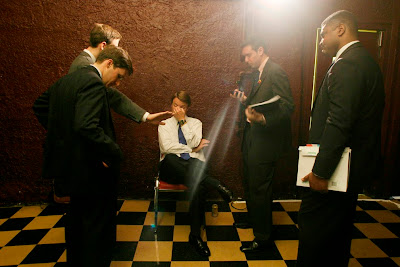 The two of them were two peas in a pod. Each as corrupt and power hungry as the other. I am sure their "marriage" ended many years before his run for the presidential nomination. She only hung on because it would have furthered her goals of conquest. Just my opinion.

I know I'm a bit naive, but what's so great about power?

It was a very impressive post to read...and I completely agree to the writer's point of view.
bali travel

Yo, Iris. Just checked in for the first time in a while. i haven't been writing my blog but my next topic (soon, I promise) will be sex, power and politics, or something like that. I tried to understand Elizabeth Edwards but knowing that she knew a secret that could have cost us the election and kept telling us how great her husband is just made me sick. Of course it made me sicker because I seriously considered supporting the rat John Edwards before choosing Obama. I'm sorry Elizabeth Edwards is sick, I'm sorry she'll be leaving her children to that jerk, but I will always be angry with her.