Have you ever eaten a raisin still on the vine? Don’t lie. There is almost no one I know who has ever even seen them. Yes, they are just dried grapes—but still on the vine? What a treat. And would you have ever expected to be introduced to them in Milwaukee?

It’s a city that continues to surprise me. If it was warmer and on the East Coast, I would consider a move. These tiny morsels of total sweetness – “raisin d’etres!” were presented to us on beautifully constructed silver fruit tray which Joe Kurth, the manager of the Pfister Hotel sent to us as a welcoming gift last Friday. 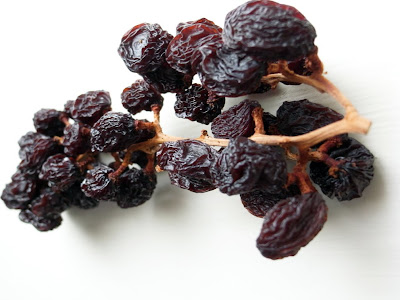 As you know by a previous blog, we love the Pfister. It might be our favorite hotel anywhere in the US – and we have been to lots of hotels. I mean we love Marriott, and most Four Seasons, but in terms of history and elegance, swell photos of previous Wisconsin Governors, good service and gracious personnel, you just don’t get better than the Pfister.

We were back in Milwaukee because David opened another Bob Marley show ( from Soul Rebel) at the VP Gallery, in the historic Hardware District of the city. The gallery is owned by Bill Appleby, who is a guy with a vision and great energy. There were 700 visitors on the first night – Gallery Walk Night. And surely, more to come since it will be showing until April 2010. (You can wait until the Spring to see it). 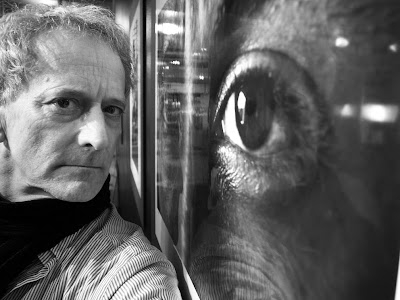 the eyes of Bob Marley

The weekend was terrific. We were joined by our good friend Tom Herman, who grew up in Milwaukee but lives in Boston. Anyway, on Saturday morning he took us on a tour of his Milwaukee. He knows more about the history of the city than the founding fathers, but they probably didn’t have as much fun as he did. It was hilarious. If you go to David Burnett’s Vimeo page, you can join us for some of those magic moments. (Not posted just yet – stay tuned.)

The day only got better and in the afternoon we were joined by Barbara and Cal Lawton. It was really cold, but we ventured out to a revival of the Milwaukee PBS radio show, “Hotel Milwaukee”. The show was on for eight years then off for eight years, and like “Prairie Home Companion” the script is folksy but the show also provides a venue for new local talented musicians. The event was a fundraiser for an Americorps program called City Year. Pam Percy, the producer did a remarkable job and it was quite successful. After the show ended people stayed to drink and dance but we were famished so we went to one of our favorite local places, Buckley’s – which has great food in an intimate setting. (The desserts, especially the cheese cake were sensational.)

We were so full when we got up this morning that breakfast was out of the question. So we all gathered near the fireplace in the hotel lobby for coffee and, since Barbara and Cal also got a fruit and cheese platter – to munch on that. We just sat around talking about silly stuff and reading the NYTimes (also silly stuff). What a pleasant way to spend the morning. Sorry, Tina, we DID run off with your TIMES puzzle. 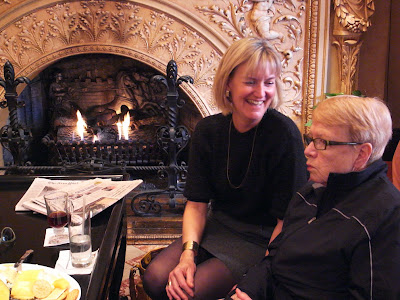 Barbara and Tina (pre "TIMES" theft)
After not having breakfast, we were off to the Milwaukee airport (named after General Mitchell – quick, does anyone know who he was, and what he was known for?) where we knew we could ‘recombobulate’ without any stress. What is remarkable about this airport is that even in these times of terrorist threats, when negative over-reaction often takes the place of common sense, this airport still has a sense of humor and treats people like they are welcome customers, dare I say guests, rather than part of a conspiracy. It is an experience to which you look forward, rather than dread. Newark and Detroit could really take a lesson from Milwaukee. 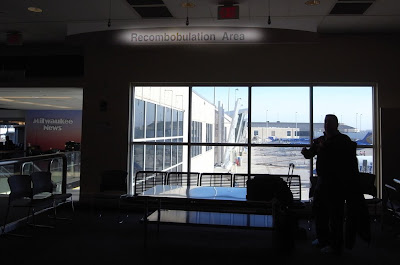 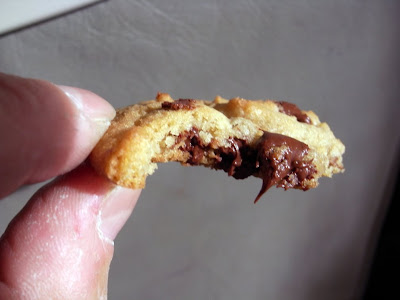 and we looked forward to a quiet night of football (Go Jets!) and the Golden Globes. All in all, we should all have more weekends like this. We’re just sayin’…. Iris
Posted by Iris&David at 9:29 PM

Thank you again for your trip to Milwaukee and your choice in staying at the Pfister. We appreciate your support of our grand hotel, and of the city of Milwaukee! Be sure to log on to our website and vote for your choice from the six finalists for our next Artist in Residence, and we look forward to seeing you again soon!
Joe Kurth
General Manager

Howdy Good Sir,
Glad you had another good time in MILW! My wife and I got to see your exhibit on Friday night, but all was too much busyness for me to introduce myself. you can though, see a photo of yourself at: http://twitpic.com/ynvh8
Best wishes and safe travels,
Troy Freund

Dear Joe: We had a great time.. artist in Residence.. .what a great idea that is. I wish more of your colleagues would take up that idea. We're on a search for a source for the raisins-on-a-vine... what a hit they are!

Troy.. thanks for the picture, and glad you made it to the opening... it was a LOT of folks for one night (700 or so... very impressive..) Come back sometime when you can actually SEE the pictures.

ah, ahh, wasn't General Mitchell of the Mitchell bomber fame/namesake?
or maybe some Milwaukee sausage company?
or a beer brand?
I dunno, do I get a cookie?
j

General Billy Mitchell was court-martialed for having the timerity to suggest (and prove) that airplanes could bomb and sink a warship and inviting the press to the demonstration. The world war 2 bomber was named after him - you owe the gentleman a cookie.
Reeder (an old bomber pilot)