Boxing Up on Boxing Day

One of the things we were taught in grade school, and I’m sure is no longer on anyone’s curriculum (including how to SPELL ‘curriculum’) is the fact that December 26th, is known in the UK at Boxing Day. It seems the tradition came from “collecting” boxes after Christmas, and evolved into making contributions to the poor, and other charitable efforts. In the US we don’t celebrate it as such. Instead we have the institution of the ‘after-Christmas sale,’ one which seems to have taken on almost the same cache as the Black Friday after Thanksgiving. That’s the day when store keepers lure hungry shoppers in with well advertised deals to try and kick off the shopping frenzy for the next four weeks. Today, in celebration of that grand tradition, I accompanied my wife and daughter to the 8am doors opening at Bloomindales on Third Avenue. My mother-in-law used to say “… when Bloomingdales has a Sale, its some Sale!” She, an Olympic class shopper, would be the one to know such things. The idea of 50% off an item already 20 or 30% off is enticing in the idea, though not always as rich in the follow through. I agreed to accompany the expeditionary force as the doors opened at 8am, and I figured it would probably be good for the ongoing development of my character. We actually arrived inside at 8:08am, no lines visible from the street, and being that Bloomies is so cavernous, there were virtually no signs of the hellacious Penney’s or Walmart-esque crowds which are constantly portrayed on 5pm local news shows. 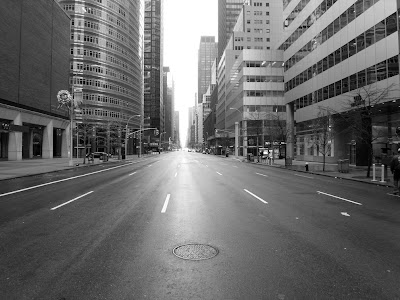 I have to admit that the concept of saving $45 on a $170 Ralph Lauren tie ALMOST gets my attention. (Apparently Men’s wear doesn’t operate on the same discount levels as Women’s.) But its still leaving you with a $125 piece of neckwear. Thus, the phrase “oh, I’ll take three…” didn’t get uttered this morning. Yet I have to admit that the sheer logistics of running a sale like this.. a block square store in New York (plus all the other Bloomies stores around the country) – prepping the prices tags, figuring what will and won’t be actually slashed, and keeping some semblance of order, is truly a great triumph of management and marketing. So, while I didn’t buy anything of substance in the store today, I admit there is a tinge of admiration of the mere fact that they are able to carry it off. There must be 100.000 items for sale in the store, and keeping track of all of them, even with the luxury of inventory programs on computers, is a real challenge. (For more, please check – and I’m not making this up – the RFID Journal.)

Yet, walking back onto Third Avenue, on this somewhat lazy gray and languid Saturday morning, was like a little trip back into the past. There were, as far as I could see – down to the low forties, no cars on the Avenue. Nothing that would bear a resemblance to the madcap horn-driven traffic of just 48 hours ago. The city is still amazing when you can find it in those little moments of traffic reverie. You could stand in the middle of the street for a whole minute and risk neither life nor limb. Our New York base is in the shadow of the Lipstick Building, an ovalesque structure which takes up the block between 53 and 54th streets. 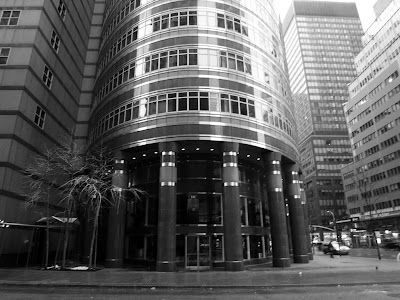 Red finish, shaped, indeed, like a lipstick tube, it is a singular building. And last spring it was better known, for a few weeks, as the headquarters of Bernie Madoff’s financial empire. It’s the building where he put together the scams which ripped off thousands of people. For more than a week, news crews were posted outside the building on a stake out (the most tedious and difficult kind of assignment) to try and get a glimpse of the great swindler, himself. I remember the first day I heard Madoff’s name mentioned in the same sentence as “fifty billion” and assumed, like almost everyone, that it had to be a misprint. Fifty Million? Maybe. Fifty Billion? You kiddin’ me? 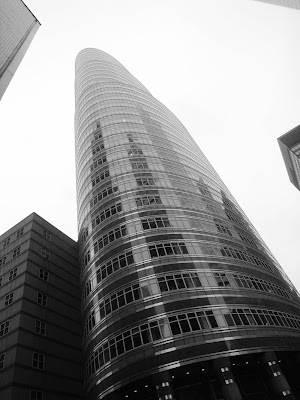 The Lipstick building itself has managed to maintain its poise throughout. And it remains little beacon, denoting a part of town that looks like no other. So even the though city is still reeling from the aftershock of the year’s great swindlers, there is a feeling that things will somehow move ahead. That even with all the dreary news about the economy, security, and the unfortunate state of the body politic, we may face days ahead which will enliven as much as depress. Ten years ago, having just plunged into the dot-com bubble, we thought we’d never see things recover. The spectre of Y2K, now laffable in retrospect, remained a real concern for those who knew of such things. (One major CEO, who I accompanied on a trip to China in May of 1999, was incredulous that the Chinese were taking virtually no steps to avert the disaster that the world was facing from Y2K.) On the afternoon of December 31st when we saw that Sydney had not been plunged into darkness, relief was briefly restored. But we seem to have navigated our way through the ‘aughts,’ if not entirely without incident. (Yes, I would have to say the Iraq and Afghanistan wars were ‘incidents.’) But standing in the middle of Third Avenue, you get a sense that there is power enough to make it, God forbid! To 2019, and that, essentially, it’s right around the corner. When I was a kid in school, I used to try and figure out just how old I would be at the changing of the Millenium. Born in 1946, and subtracting that from 2000 equaled 54. It seemed like a number that was bigger, broader, older than almost anyone I knew, except maybe George Washington. (I still remember the crushing moment in the 2nd grade when I learned that Washington was no longer alive.) Now, imagining that in a mere decade as we approach the TwentyTwenties, I’ll still be a young guy with silver hair, I wonder how it could all have scooted by so damn quickly. Well, we have a whole week to go before Twenty Ten, make the most of it I say, even if you can’t get everything at fifty off. We’re just sayin’….David 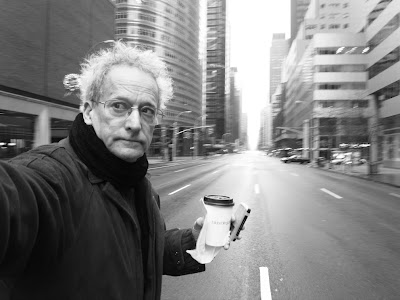 Is that Bernie Madoff fleeing the Lipstick Bldg. with his coffee?

You know, i thought no one would notice.. you wanna talk about depressing.. how about looking in the mirror, quickly, and fearing that what you saw was Bernie himself...

Excellent architectural shots. I love the drama of B&W more though.