Doesn’t anyone remember Elian Gonzalez? He was the child from Cuba whose mom (without his father’s approval) took him on a small boat ride from Cuba to Miami. Their boat sank and Elian’s mom died. Elian was taken to relatives in Miami until there was a decision about what should be done with the child. The Cuban community in Miami was not about to turn him over to Castro – not to mention his father (who was a communist). 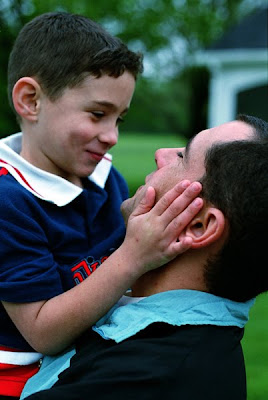 Elian and his dad, reunited
I was in the Clinton government as Chief of Staff at the USIA, when we confronted the “Elian” situation. Lula Rodriguez, who was working with me, was a close friend and confidante of Janet Reno’s (and a Cuban refugee), got a call from the Attorney General. She wanted to know what Lula thought they should do. “Send him right home. Under no circumstances should you give that family the opportunity to grandstand.” The Justice Department did not heed that sage advice. And, as predicted, the family used Elian as a symbol of their anti-Castro sentiments – for six long months.

The United States and Brazil are both subscribers to the Hague Convention. It is an international document that, among other things, prevents international kidnapping, even by a parent. Or maybe, especially by a parent. David Goldman’s wife took their son Sean, to visit her family in Brazil. It was never just a visit home. She intended to stay. But she knew her husband would never let his son go – if he knew what she intended to do. Once back in Brazil, she divorced David, remarried, and got pregnant. She died in childbirth. (If that’s not a sign from God I don’t know what else it could be).

Her new, and apparently well connected husband, decided to keep David’s child. Kind of like Elian’s Miami family did without the politics. Here’s the simple fact. The mother kidnapped the child, who must have been traumatized by losing his dad, and then his mom. The Brazilian family now says that since the boy has been with them for so many years, he should stay with them. What a bunch of crap. Unfortunately, David can’t just take him and flee. Or maybe he could, if the State Department would support the effort. Hasn’t the government made daring raids into dangerous areas to rescue hostages. Why doesn’t Chris Smith, the Representative from NJ, and human rights advocate, just walk up to their door and say, ENOUGH! It would probably be better if Hillary went with him so that the federal government (Democrats and Republicans, diplomats and legislators) appear united against this heinous injustice. It would also be good to get Bruce Springsteen to go, but that’s a pipe dream.

The President has been silent about this personal and tragic situation. I wonder how he would feel if Michelle just took the kids to somewhere without extradition, and did the same thing. OK, she wouldn’t but I’m talking about feelings, not reality. I understand that with the bombing of Yemen and all the trips to Copenhagen he must be distracted, but what if he went to Brazil and said to their President, stop this foolishness and give this American citizen back to his dad.

A child is not a thing or a possession. The Brazilian family that is holding him has no right to keep him. It’s obvious that the Brazilian Courts have no idea about justice or injustice. Someone is making some money on this. It’s time for our Justice Department, State Department and Congress to take the issue to the Hague. It would be an international embarrassment for Brazil to be dragged to this court and maybe bring enough pressure to ensure Sean’s return to his dad and to his homeland in New Jersey. We’re just sayin’… Iris
Posted by Iris&David at 7:07 PM