Sometimes we forget just how great a simple weekend can be. Last weekend David and I decided to go to Stone Ridge to spend some time with Kerry. We stopped at our favorite cheese store on the way, and got a couple of great cheeses and some crackers – we already had tomatoes, corn, and bananas from a farm stand in New Jersey. The farm stand is on route US 40 — the old road to Atlantic City from the Delaware bridge, but the highlight is that right next door to the fresh fruit and vegetables, is the frozen custard place with lots of rules. Let me say, the custard is unbelievable and almost worth obeying the rules. For example: you can’t change your mind once you’ve given your order. Actually you can change it but you have to pay for both. And, you can’t make substitutes—whatever that means on a soft ice cream. There are other rules, but most not as costly. 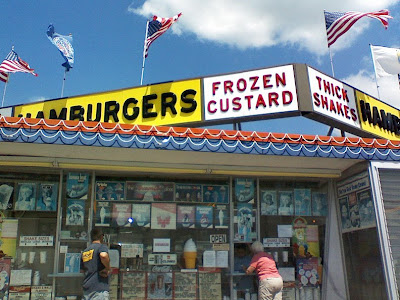 David ordered a peach sundae because it is peach season and the farm stand is 20 feet away. I went with the hot fudge. I made the right choice. The peaches were canned and in heavy syrup — nothing fresh had ever touched their lips. Anyway, we took all the fruit and vegetables with us to Kerry’s and made a wonderful meal. On Saturday, we decided to have dinner out (the Aroma Thyme) and see a show (The Accomplice) in Ellenville NY, where my parents always vacationed when we were kids. Surprisingly enough and despite the fact that it was my parent’s favorite, the restaurant was fabulous—all natural and fresh with a special vegan menu which we ignored –and even Zagat’s reviewed. The show was very cute and much too long but we had a wonderful time. 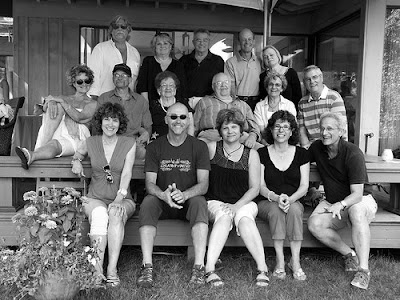 On Sunday morning my brother showed up, (all the way from Bainbridge Island) for coffee. It was a lovely quiet time –swim in the glorious pool, read the paper, have a little bite, and visit with the incredible Cathy Saypol. At around noon we left for Newburgh New York, where my cousin Bill was hosting a party for first cousins. On my mother’s side, we are about 20 first cousins—without spouses, and assorted second, even third cousins (or maybe they were all first, once and twice removed). Almost everyone (who could get there) got there. There were about 40 people in attendance. Just the right size.

There was swimming and tennis and the food was splendid. Hot dogs, hamburgers, steak, ribs and chicken. Twice Baked potatoes—sometimes called Duchess, cole slaw, potato salad, and corn. Dessert was two birthday cakes and an apple crisp. And if that wasn’t enough, we went home with goody bags including a Brooklyn Bridge puzzle (our roots – take me home country road, or Brooklyn Queens expressway), a Brooklyn commemorative glass and some Empire State Building chocolates.

There were speeches and memories shared. (Video here, for the hard core!) Many laughs, and much love. Who could ask for anything more. Well, maybe some pictures to peruse.


When we left we expected to be backed up in traffic for hours. But that didn’t happen. We sailed right through to New Jersey and then into New York City. When we got back to the city (brother in tow), we drank a beer, ate some tasty cheese, and slept in air-conditioned bliss.

Our weekend was not much different than so many weekends we have spent and other people spend over the course of a lifetime. But, for whatever reason, I paused to think about how pleasant it was. And, I have promised myself, that I am going to try to find something everyday to think about as lovely. Maybe I’m just being a Pollyanna – how unusual for me – but when you stop to appreciate the simple things, it is amazing how much happier a person you can be. We’re just sayin’….Iris
Posted by Iris&David at 9:25 AM

That's a shame about the custard/peaches. I had some yellow peaches from that farm stand a few weeks ago and they were awesome, perfectly ripe, so sweet and tasty. So juicy I had to eat them over the sink.