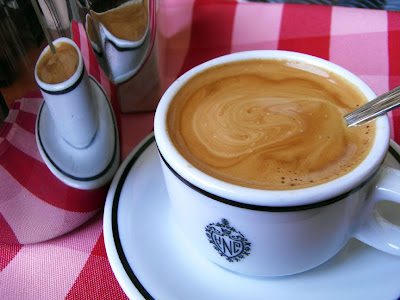 When we were kids the guy (usually male and young) at the local sweet shop (often attached to a drug store) who prepared sundaes, milkshakes, sodas and egg creams, was called a soda jerk. Although the actual derivation of the word is unclear, the job title was not in any way a negative term. It was a designation and the guy was not necessarily a jerk - his occupation was simply to make and dispense sodas. It was an occupation, not necessarily a career, because it occupied his time but he aspired to move on professionally, unless he owned the drug store.

Unfortunately, with the passage of time, drugstores have become chains that sell sodas from refrigerated cases, and Diners have servers who may or may not prepare the drinks. So there are no traditional soda jerks anymore. I hadn't thought about the disappearance of the soda jerk until a few days ago. By way of explanation, I am involved in a not very important controversy with the employees (they call themselves "baristas") of a small coffee shop (Murky Coffee) in Virginia. The baristas (defined by the dictionary as a person who works in a coffee shop), seem to have the time, not only to make a latte, but to respond to anything said about them on the internet. Anyway, their response got me to thinking that in this case it would probably be more fitting to refer to the Murky employees as "coffee jerks" - and I mean that in the nicest possible way - because they have replaced the soda jerk in pop culture. Admittedly, one reason I prefer the term jerk, is that it's too hard to say barista with a straight face if you are not in Italy - where they make a perfect cup of coffee that you can have any way you want. But back to the controversy - explained using the soda jerk analogy. Back in the era of soda jerks, I sometimes liked to have chocolate sprinkles in my otherwise purely vanilla milkshake. There was never a time when the soda jerk refused to make it the way I liked it, nor did they ever say "I have to preserve the integrity of the ice cream, so I cannot mix any sprinkles in your drink." (And it was home made, very fine ice cream.) A few weeks ago, when I was in Murky Coffee, I asked for an iced espresso, and was told that they would not make any espresso drinks with ice because they needed to "preserve the integrity" of the coffee.

Yesterday I blogged about this in response to another blogger, who had a similar experience. Well the "coffee jerks" got all in a twitter and because I had said it was a pretentious policy, they decided to respond in kind and called me pretentious for saying that they needed to get a ‘real job' - which was wrong of me. They have a job -- what they need is to get some really good sense and use good judgment rather than simply go along with a policy that denies a customer the right to have what they want. Anyway, now that we cleared that up and we're all friends, I thought I would share the definition of pretentious. It is: 'making claim to or creating an appearance of (often undeserved) importance or distinction.'

I make no such claims, so I want them to be able to call me names, but to use that particular word properly in a sentence. That is all I am ever going to say about a place that makes up rules instead of giving a customer what they want. But it is not all I'm going to say about rules or integrity.

I have never been good at following the rules - especially when they make no sense, or are imposed arbitrarily because it is a way to make one person more important than another. In political campaigns or situations these are the people who say "no" to every creative possibility, because it is the only way they have any power. Think about it. If they say yes, you just go on your way and don't ever have to think about them again. But if they say "no you can't," you have to spend a great deal of time figuring out how to convince them otherwise - or circumventing a stupid decision. I can't help but think that part of the "no espresso over ice" is a way to make someone who makes the rules more important than someone who pays for and drinks the consequences. The rule is stupid but using the phrase "preserving the integrity" borders on the absurd. Forget borders, it is absurd.

Take, for example the box of red licorice we saw at a coffee shop yesterday. The candy was housed in a plastic container and was cut into many small pieces. I love my red licorice in sticks, or long strings and I thought the cutting up diminished the importance of the eating experience, but I never once thought, they need to preserve the integrity of that red licorice by making a rule that it not be sold in little pieces. 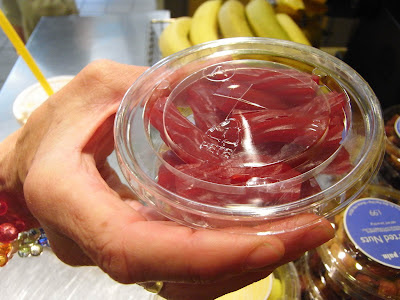 (Actually, as you can see I did think it, but only to use as an example in the blog). And when we passed a group of women who were selling baked goods from a sidewalk stand to raise money for the Obama campaign, I didn't once mention the integrity of the action. 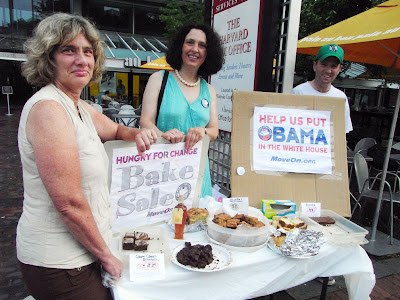 I did think, however, isn't it great that they were preserving (keeping alive), the old ways of raising campaign funds. For me, (as a wonderful communication professor used to remind us, meanings are in people not in words), integrity is not about something as unimportant as a drink or even as remarkable as raising money selling cakes and cookies. Let's once again try to look at a definition that makes sense in the "coffee context".

Too hard? You're right. It just doesn't work. Integrity can mean, keeping something in tact like the hull of a ship - but if that were the case with coffee, you wouldn't grind the bean. In my pal the dictionary, it is most often used as follows: "the adherence to moral and ethical principles; soundness of moral character; honesty." Of late, you have heard it used with regard to the Presidency, Candidate behavior, the issue of torturing a prisoner, and the people responsible for high gas prices. And that's how it should be used. Integrity is a word like trust, loyal, and honest. All are much too important to minimize the definition by using it as a noun to talk about a bean. Integrity is a way we want other people to think about who we are as people. It is much bigger than a cup of coffee, a piece of licorice, or a malted milk-but any jerk would clearly understand that.
Posted by Iris&David at 8:48 AM

There once was a new kind of jerk.
In coffee shops there they would lurk.
I asked for some ice.
They said, “No” very nice (ly).
I hope they’ll change their line of work.

I found this site called URAjerk.com maybe you can use it. It seems to help get me through the issues of dealing with some of the jerks I know. At least I can vent about these jerks, plus I get a kick out of sending them some cards.

According to the source of all knowledge, Wikipedia, "the name soda jerk came from the jerking action the server would use on the soda fountain handle when adding the soda water." I'm sure that's why Sol miller called me a jerk at Pine Brook Country Club, which I always hasten to add lest my friends get a false impression of my chilhood, was anything but a country club.

Other David, you were a soda jerk at the Pine Brook Country Club? I though only Les Bauer and Steve Gilbert had that job. But thanks for the info... I loked on Wikopedia and saw nothing. And Lina, I love the URAJerk site... thanks

Sure was, after I graduated from bus boy at 35 cents an hour. I don't remember the name of the company that ran it before the Millers. I probably ate 1,000 marascino cherries which could explain a lot. Sol taught us how to drag the scoop over the ice cream to make a hollow scoop. Nice.