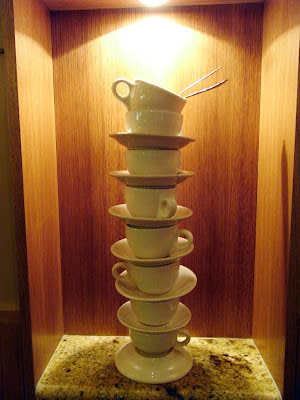 In the mid 70s, a Franco-American pop singer named William Sheller (Wheel-yum Shae-lehrr) had a satirical song called "Rock n'Dollar" about a young pop star which started "Donnez moi, Madame, du Ketchup pour mon Hamburger..." I photographed him and his family for a couple of days for little feature story for Gamma, the French photo agency I was then working with, and remember little (in Ohio, as it happened where his mom was from )about hamburgers, and lots of discussion about who was bringing the cigarettes, which brand, and how many. But it remained a moment in my appreciation of French culture, imagining just how the French regarded the quite American concept of a Hamburger.

And you just never really know when something will spring up and remind you of a moment 35 years ago, when hamburgers cost a buck or two, and Americans made them best. These days, every now and then you run into a restaurant that does a lot of things right. Too often they almost get it right, or more precisely fumble the one thing you really hoped would be a winner. Tonight, wandering in downtown Washington after a political meeting we ended up at Central, the new bistro owned and created by the whim of Michel Richard, the amazing Frenchman who has managed to turn Washington into his own turf. He originally emigrated to California (who wouldn’t?) via Santa Fe, and started Citrus, and the west coast Citronelle. The odd thing, I find, is that instead of going to New York or San Francisco, he opted for DC. Lucky for us. Citronelle in Georgetown is absolutely madcap fun as an eatery: delicious, inventive, and if you get the table IN the kitchen, a visual treat as well, watching the staff make it all up. Someone really does lay hands on those plates (and no rubber gloves, OSHA, Please!)But did I mention really expensive? One of those places where they put a lot of $$$$ next to the listing on the Internet World Restaurant Preview Site.

In the past year he opened Central, a devilishly good cafe on Penn. Avenue and 11th street (Federal Triangle metro, for you urban romantics.) I had read of his treatment of the hamburger, and tonight faced the test. Truly, it is amazing. Iris went for the fried chicken and polenta (when it says “creamy polenta” on the menu, they are not joking), but all in all, it is a fabulous Gallic run at American comfort food. The French are generally too uptight about their food to deal in the notion of comfort, though I suppose a Chicken in the pot on Sunday might come close. But here, he has basically done what any bright emigrant to this country has done who has found success: He looks around, sees what people are doing (in this case, eating) and says “oh la la, I can do it better.” I’m not sure he actually said “oh la la” – it could have simply been “tu rigole, toi!” [are you kidding?], but 'oh, la la' seems to fit. And he surely realized that paying attention has its moments. I have to say that short of our own bbq in the back yard, seldom have I had a hamburger with intrigue and surprizes like this one. A layer of something resembling a squished super thin fried onion lays on top of the cheese (it was a fromage-burger), and gives a crackly texture, a pop in your mouth which is surprising and quite wonderful. Not to go on and on, but the fries were great, and the Bernaise sauce worthy of a lunch at the signing of the Kellogg Briand treaty of 1927. It was, simply, a perfect bistro meal. With a coupla’ beers and glasses of wine, a c-note all told. And seldom have we been that satisfied as we walked out of a place, and felt a desire to come back soon.. like, you know, breakfast tomorrow. And we didn't even have to ask for Ketchup.

If you find yourself in DC, Central Michel Richard is a great way to go. The thing is, I am always reminding myself that in France it’s quite easy to get a lousy meal. Yes, there are elements of great, and lots of good, but there remains a whole layer, like here in the states, of places which just don’t think you ‘ll ever be back, and so why worry about what they serve. In contrast, we’ve found it difficult to find a bad meal in Italy, and we still go, searching for that one bad plate of pasta. Just hasn’t happened yet. There is some mindset separating the Italians and French on this subject, but I can’t put my finger on it. Suffice to say, Central would find a very happy clientele in the 6th Arrondisment. Go check it out next time you’re downtown. We’re just sayin...David
Posted by Iris&David at 11:31 PM