Aging has its moments. Wisdom just flows off your brow as if it were sweat in a steamroom. Yea, your hair may slowly grey-out a little, but in losing the color, you end up with something far more cool: Distinguishment. Distinguishability. Distingué. So, there are things which come with slowly getting to be over, oh, let's say fifty, which are notable. One thing not on the list is the increasingly apparent habit of forgetting stuff. I know that in the 10th grade I could remember the whole Periodic Table of the Elements. Even now, as then, I marvel that scientists were able to make up all that stuff, and more amazingly, prove it in experiments. Mendelevium was always one of my favorites. Named for a relatively obscure (see? am I right?) Russian physicist, and whose isotopes of varying construct have half lifes right up there with work shifts at the local deli: 5.5 hours for Md257, for example. Well, I'm not trying to wow you with bits and pieces of useless physics information, it's just that I have to say, I was able to remember that Md was 101 on the Periodic chart, and until I was 23, I could have answered that on Jeopardy. (Sadly, I didn't appear on Jeopardy till I was well into my 40s, and by then, my knowledge of the chart served me not well.)

Yet, it wasn't until the last couple of years that I have really started to feel the oddities which have plagued my well being. The worst is increasing signs of ADD. I skipped it when I was a kid, and was happily able to concentrate on things at great length. Now, however, it's another story. Just when I thought I could be in a place where everything would be orderly and arranged, I start to forget about things. I do crosswords now and then to stay sharp (they do force brain waves to emanate even if the waves have no interest), but some how things just start to lag.

This week I had one of those terrible episodes. In Cuba, the spring loaded eyepiece on my Speedgraphic Viewfinder (circa 1951, and showing no signs of aging, by the way) came loose, and I had just to keep it handy, and fix it once I got home. Cuba, besides having spotty supplies of food and electronics, is devoid of Speed Graphic repair goodies. So, I put the 'stuff' in a Hotel Nacional envelope, and put it in a safe place. There is nothing like a "safe place" when you want to be sure of finding something days later. The great thing about a "safe place" is that it's "safe." That means it will be there when you come get it. Great concept. There is only one problem associated with this theory: 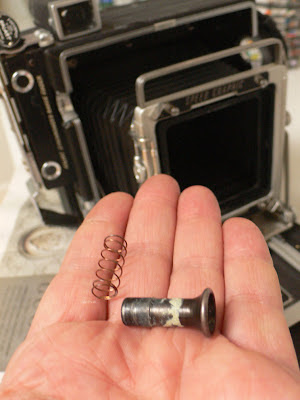 Where the HELL IS the SAFE PLACE? Yep, it was so secure, so "safe" that I had absolutely NO idea where I'd put it. In the Tenba camera bag? Nope, looked there. In the purple US Marine Corps back pack? Nope, looked inside there. How about the computer laptop bag. That's an obvious one. Nope, looked there, dumped everything out, couldn't find it. That took about two hours, during which I continued packing for Beijing (I'm off to the Olympics next week. I'm competing in the Photo Triathalon: Loading film, uploading digital, unloading film. I have a good chance since almost no one else is shooting film!) But I was just beside myself with annoyance. One step below anger. Two steps shy of Rage. But annoyance has its own charm. Then it hit me: I remembered putting the stuff in a film box (a 5x120 Propack) but it wasn't there. I was getting desperate. Then in one final run through, I tried the handly little outer pocket of the purple back pack: There was the envelope. Hosanna! Hark! It's all good. And now, instead of walking around the Birds Nest stadium, guessing how far away stuff is, or straining with the loupe on the groundglass (I'm sure I'll still do plenty of that!) I can actually use the Rangefinder. It was a victory for Perseverance; for Intensity of Purpose; and for Age conquering Youth. Voila, the guilty parties. Now, where did I leave that Martini? We're just sayin'.... David
Posted by Iris&David at 6:21 PM