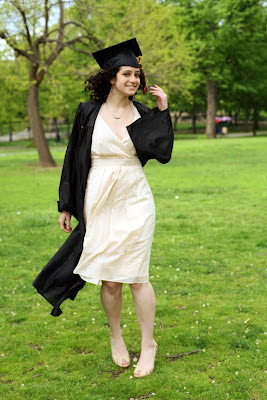 Ok, it's probably not the time to go on and on. It's been one of those weeks where you just put everything aside, literally everything, and participate, take part in, or, truth be told, just 'show up.' It is for those of you who didnt read the last couple of blobs, Jordan Kai's graduation week from college. No mistaking it for Spring Break or Thanksgiving. Graduation is a trip all its own. It's the end of one of those mini-eras which we live through both as participant (the kid) and observer/schlepper/bursar/navigator (the parent). It's tons of fun, yet it's not without its moments of pathos and sadness. Having been out of school for forty years, I measure the years by the relationships of people I knew then. Unlike a lot of my acquaintances, I'm not really that close to many of my college era friends. It's not that I wouldn't LIKE to be, but geography has a way of intervening and slowing down some of those friendships. Lurch, the Crabs and the Whaler are all guys I'd love to see now and then, but aside from a quick hit in Colorado two years ago, those get togethers are too rare.

Yet I see how Jordan is already much better about being in touch with her circle of friends. Instant Messaging, Facebook, and Texting on cell fones, things which were out there in the realm of Buck Rogers when we were kids, means they all can, and do, stay in touch. I remember her first year of both AOL and summer theater camp: six months later, she was IM'ing all those many camp friends, knew who was in which show, and which kid had landed the plum role in a school production. It was amazing, even to someone like me who has tried to 'embrace' the new tech, while avoiding to be imprisoned by it to see the level at which these kids were able to harness the new tools and within minutes, figure out how to use them or make something good out of them. 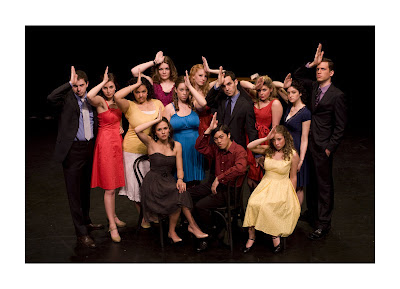 The BFA kids, 'Shark'en those audtions
So the kids are going to be heading in different directions. Of the 13 who were in the BFA Musical Theater (quote from Freshman year "How bad can it be to Major in Show Tunes?!") one has dropped out to get married, but the other dozen are all headed four square into theater work of some kind. And today in New York they gave three performances.. three presentations of their one hour showcase.. each kid with one or two solos, and lots of collaboration. It was a LOT of fun, each time. I taped two of the shows, and tried not to be too much of an idiot when asked to be the check in artist. I only had two people storm out, but hey, they were late. And so unpleasant. So, "New York" and I'm not sure I mean that in the nicest possible way. (click here to see JKB sing "Time Heals Everything")

Anyway, we seem to have lived through college, through the boy friends, through the apartment trauma (roomates? always a struggle to find simpatico ones), and now, all of a sudden we have an actual Bachelor in our midst, one who will hopefully find her way from one audition to the next, one show to the next, one set of lights to the next. She got her talent from someone other than her folks. If she's able to take a little of our bossiness and self motivation, and add it to her repertoire, then off she goes. I guess that's what it's all about. Preparing them and then letting go. I think the first part is easier than the second. But so far, it's been a great trip. We're just sayin.... David
Posted by Iris&David at 12:27 AM

Nothing better than being the proud dad at graduation.

The BIG adventure is just beginning.

God speed, Jordon. You are wonderful.
Cheers and Congratulations,
Joe

You obviously did a great job Iris and David... she is beautiful and talented too! Jordan is off to one helluva start and I can't wait to see her in lights.

Very best wishes to all.

A from sunny Ca.

quite interesting read. I would love to follow you on twitter. By the way, did any one learn that some chinese hacker had busted twitter yesterday again.