Where Did The Time Go?

It’s graduation weekend for Jordan. Where did the time go? We are so lucky to have a colorful, if not exactly normal kid. Theater kids are never normal because if they are they simply don’t do as well. Could a normal young person stand ongoing rejection? It’s probably the worst career your child can choose. There are a million billion kids who want to be actors, and their lives are all about audition after audition. Even if they land a terrific part in a great show, when the curtain comes down for the last time, they are back in the line to get looked at again. 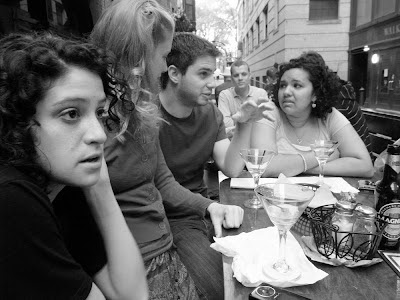 JK and her BFA pals..
Nevertheless, if it’s what they want to do, the only thing you can do as an indulgent parent is support their decision and make it clear that they ought to get a bartender’s license. Anyway, sometimes you forget how fortunate you are until you run smack into someone who hasn’t been quite so blessed. Last night we had about an hour before Jordan’s BFA showcase. (That’s Bachelor of Fine Arts. It’s a very expensive degree – and I mean that in the nicest possible way.) 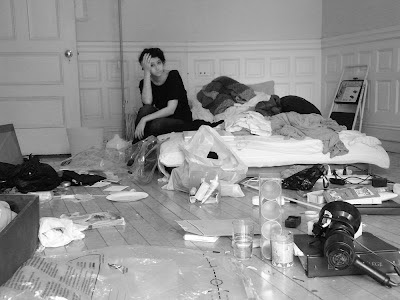 JKB, her last day at the Beacon St apt.
There was one seat at the bar and another off to the side. I told David he should move the chair over to the bar. He thought he would rather stand. Then the guy sitting next to me asked everyone in the immediate vicinity to move down and he insisted David sit. Which he did. When we were all comfy, the bartender came over to our new friend and said “You got barred—what are you doing here. And don’t bother these people. They don’t want to hear you yap.” He took our order and walked away. “I didn’t know I got barred,” he said, looking quite forlorn. “Am I bothering you folks? I don’t want to bother anyone.” 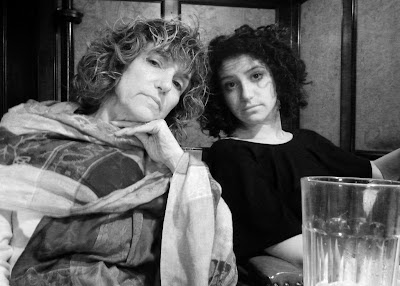 With Jordan at Durgin Park
David assured him that he was not bothering us, so he immediately started to talk and bother us. We learned more about this guy than I know about any of my relatives. He confessed that he was drunk and that he was a drunk. He went on to say that he had won $140 playing Keno scratch off tickets that day, felt flush with it, and he was going to use the money to drink some more and then he was going to buy his mother and dad a few Keno cards, so they could win a few bucks. We learned that his daughter had started school at American University but it was too expensive so now she’s a junior at Curry College and she wants to major in accounting. Well, she doesn’t exactly want to, but when she dropped out of American she was majoring in International Affairs, which he thought was much better because it was “international.” We assured him accounting was fine and we were sure she would be a success. 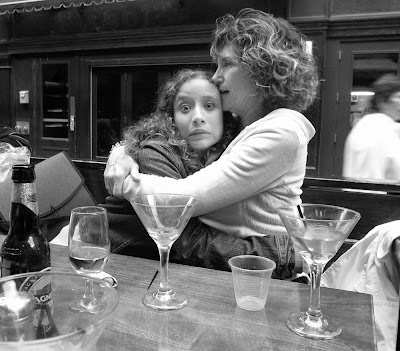 Iris and JK's pal Sammy
“My parents have custody of my daughter”, he said sadly. “But it’s Ok. She’s just fine. I’m going to go to her graduation next year. She told me I could. I didn’t know I got barred from here. I’m going to go someplace with music where the beer is cheaper. Hey Ron, bring me a check.” He yelled at the bartender.

We had to leave to get to the showcase.

And speaking of fortunate. When we arrived in Boston it was raining. We pulled up in front of Club 70 - that's our dear friend Tom's apartment, and the place we stay on most of our trips. David took the bags inside and I went to find a parking place. Street parking is usually a nightmare in that area but I have good parking karma and garaging the car is expensive. I found a wonderful spot where we only had to pay from 8am to 6 pm. It's a dollar an hour. Since we are incredibly frugal this one act of finding a good space (as wonderful as it is) makes us a prisoner of the car. We have to put coins in every two hours no matter where we are and what we're doing - which we did for the better part of two days. But when we were confronted by having to decide between taking a picture of Jordan's BFA group (which he had waited to years to do), getting to the show on time, and moving the car from behind the Club 70 - it got to be too much. “Are we out of our minds?” David said. The answer was “yes.” So we bit that financial bullet and we were prisoners no more. It was quite an expensive relief, but since we weren't paying for a hotel, we felt genuinely unburdened - and remember the answer to “our we nuts?” was a resounding “yes”.

The showcase was spectacular. The thirteen graduating seniors put together an incredible production. This will now go to NY for three more shows next Thursday. They will present themselves to agents, casting directors, producers, people in the business with an interest in new talent, parents and friends. As I watched them appear in their final performance it took me back too, not only the day we dropped her at school - which turned out to be three days because she kept finding reasons for us not to leave - but to the first time we ever saw her perform in an elementary school production. I can still see that little face with sparkling eyes and hear that beautiful voice - which we now realize was a gift from God. And I wonder every day. Where did the time go? We're just sayin...Iris
and now... without further ado, Jordan Kai Burnett and Greg Kanter
(Jordan is the puppet!!)
Posted by Iris&David at 11:27 AM

Hey guys, you got a great young lady there.

I live in a theatre town,not quite NY, but world class never-the-less. Half the folks here don't got the voice you have Jordon, hang on for the great ride ahead of you.

And if you ever get the urge to travel theres a wonderful post grad year at our Festival.
http://www.stratfordfestival.ca/

Start shining your star gal cause your great.

Stumbled upon this blog... nice pictures you got... I'll have to make this a regular.