Once Upon a time there was a beautiful Queen who had two children, but they grew up and moved away, so the Queen had no one to talk to ... oops that’s the wrong story.

Once upon another time, there was a terrible King who ruled a powerful nation. The King was so awful that the people threatened to overthrow the throne. Well, he certainly didn’t want to sit on a broken throne so he declared he would pass the crown on to one of his children. The older child was a female and under ordinary circumstances she would not have been in line to take over, but she was very smart and also relentless in her pursuit of the title. The younger child was a male. But he was also not what the King or the country had in mind. You see, he did not believe that only the royals could have a say, so he was apt to make trouble. The King was in a quandary, but since no one cared where he was, it didn’t matter if he was in a quandary or Atlantic City.

What to do? What to do? This was a question pondered by the elders, the wise men and the sorcerers—it is always important to have the sorcerers on your side because the serfs think the sorcerers have a direct connect with God—or some great power. Anyway, the Princess went and talked to the people tirelessly about her qualifications. The Prince talked about his vision for the future. Over time, it appeared that the farmers liked the promises the Princess outlined, while the scholars thought the Prince made some sense. Finally, it was clear that the race to be King, was too close to call. And that neither the brother nor the sister were willing to serve in a roll subservient to the other. So the Princess got her bow and arrow and shot the Prince. He was wounded but not mortally, and eventually he retreated to his own little castle and lived happily ever after. What am I talking about? I have no idea. But I like the idea of this election cycle as a fairy tale—and did you get the part about sorcerers? It doesn’t matter because we’re moving on.

This week, Obama started the sentence with “I am not Reverent Wright”. But I don’t think he finished the sentence. The end of the sentence should be, “Here is who I am and here is why I should be the next President.” In a Presidential campaign you simply should not assume that people know anything. And I mean that in the nicest possible way. You have to walk them down that ‘ole’ path and take them where you want them to be. Preferably to inspiration point where they are ready to pull that lever or punch that chad in your favor. I think you can see by the polls that people are still not sure about who Obama is or why he would be a better (more electable) candidate than Hillary.

But enough about them, what about me? I was on the “Morning Joe” (MSNBC) show this morning to talk about my book, “So You Think You Can Be President”. Are you sick of hearing about it yet? Anyway, after a night of awaking every half hour to think about a witty and pithy sound bite, (my old pal Bob Beckel once said, if you wake up with a sound bite TV networks will call you because they know they can count on you to say something broadcast worthy). I finally gave up trying to sleep and read through the notes I had prepared as a study guide. It looked something like what I would have prepared in college for a final exam. If they asked me, how I would describe the book I would say, “it’s a funny introduction to the overwhelming job of governing the nation.” If they asked me... Well you get the idea. But, as with anything I prepared in college, once I began to study I oft got my answers confused. With sound bites (memorable answers without any substance), it was especially confusing because I kept forgetting which answers went with what questions. By 3:30am when I imagined that they asked me what my favorite job was in the Clinton Administration, I was thinking about a totally different question. “Well Iris”, they would say, “What would you advise the President?” And my answer was, “Clay and I met on e-Harmony.com for lonely writers”. You see now why I was incapable of staying asleep or even in bed. 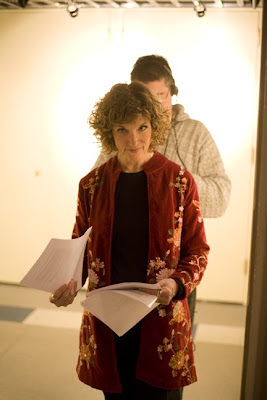 I was up and studying for about an hour before David stirred. “If you’re tired” I said waking him, “you don’t have to come.” When he didn’t answer I repeated the question—maybe just a little louder. It took about ten minutes before he actually responded and felt guilty enough to agree to be part of my posse. We arrived at the studio at about 7:30. I was still practicing possible scenarios. Almost immediately they took me into hair and makeup—one of which I had, and the other of which I needed. It’s been years since I have had someone “make me up” because I always feel that make-up makes me look older. But without it the cameras were not going to be as kind as the young woman with the non ending blush brush, so I succumbed. And to tell you the truth, I looked great. They determined my hair was fine so I walked back to the green room, (there is not green room in the country that is painted green). According to Wikipedia, “ the most widely accepted origin of the term dates back to Shakespearean theatre. Actors would prepare for their performances in a room filled with plants and shrubs.” Whatever the derivation, it is a place with coffee and usually some treats. It would have been terrific to have a cup of coffee, but my lips were glossed and I didn’t want to lose the luster. (We all know from the Reverend Wright experience what happens when you lose the luster.) 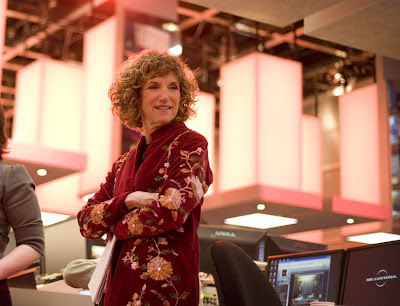 At that point I didn’t know who would be conducting the interview. When I realized it would be all of the hosts I figured that with three people asking questions, and the interview lasting 4 minutes, I would never get a word in. Then I heard Clay in my head saying “have fun and sell the book”, so I knew where I was going. 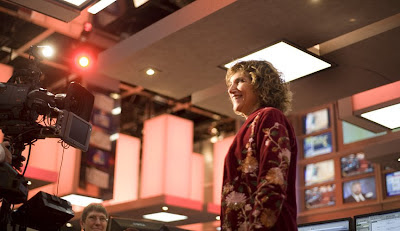 Mika, Willie and Joe couldn’t have been nicer. And here was the best part, they treated me like a colleague instead of a guest. So I relaxed, decided to have fun and answered any questions with a smile and good humor. I was pretty and damn good. 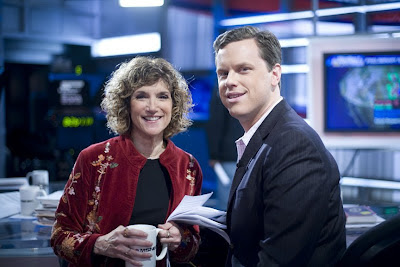 Iris and Willie Geist
Of course what happens when it’s over is that you want to do more. “Please”, I begged. “Let me stay”. It was not to be. We gathered our belongings and headed over to the “Today” show to meet Peter Greenberg, a wonderful friend and “The Travel Guy.” What started out as a simple visit became an Altman movie – but that’s another blog. Right now I have to get on line and see if there’s a site called e-Harmony.com for wanna be TV co-hosts and, of course, I have to finish the sentence.
Posted by Iris&David at 3:57 PM

we re trying to figure out HOW to get the video xfer'd onto the Mac and thence to YouTube... by tomorrow night, mebbe.. none of the 'obvious' programs seem to do the job..
david
(Deputy Video Editor)

We tivo'd it but we don't know how to get it from the dvr recorder to the computer. and you did a great job - Zachary was pointing and smiling at you the whole time! He loves his Mimi!

Congratulations, Iris! This is what I've been hoping for. More to come, I'm sure.

Many thanks to all. It was such fun and I hope to be able to e-mail it to all who missed it-- that would be several million people but we probaly have them on our lists. Much love to all

Did she get a picture with Mika?