Pat, who owns Don’s Sandwich Shop, drums and J and E Limousine service—all at one address on Main St. in Boonton, (I once asked him how he made the decision to be that eclectic and he said he would be bored doing just one thing,) picked us (David and Iris) up at five thirty am. It was one of those nights when you know how early you have to get up so you stay up all night waiting for the alarm to ring. As it happens, the alarm on David’s watch never went off so it was probably a good thing I wasn’t in a deep sleep. As a matter of fact, by that time I had cleaned the house and washed the cars—not really but close. It’s funny that David’s watch goes off every day at about six am, even when we don’t have to get up but today it decided to sleep through all our activity. 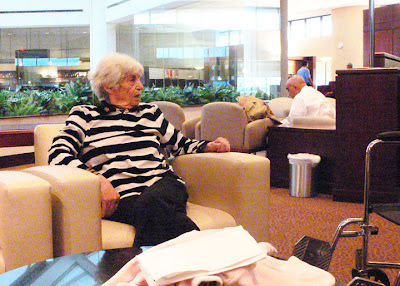 Rose in the FIRST Class Lounge

We finished packing and I worried about whether or not Pat was going to come and what would we do if he didn’t and would we drive our car to the airport, where it would be problematic because we took off from Newark and we were landing at Kennedy. Or should I say Newark Liberty.... David says they should just have called it Newark “Where You Can Get a Great Portuguese Meal” Airport. Worrying about everything is something I may have suggested once or twice, that I do. I think part of it is genetic, part of it is being an former political Advanceperson. And part of it is the old “glass half full” as Soozie would say. Anyway, Pat came exactly on time and we loaded the car and drove up to Merry Heart.

Mom was ready and anxious to get started. We had worked out the medication needs the night last night, which in itself was quite an ordeal. I know it that administering 6 or seven pills is no big deal but since mom gets her medication from the Veterans Administration, everything is generic and the names bear no resemblance to any brand name, so it was difficult for me to figure out what she needed to get and when, and it was even more difficult for Edith, the nurse to explain it. Health care people assume that family members know what medications their parents are taking. This might be true for some but mom is taking mega amounts of pills which seem to change with every new ailment or symptom. We finally communicated and, not trusting that they would have anything ready, (Half full advance mentality), I took a bag full of drugs with me when I left. Let me say that the amount of drugs we shipped and are carrying could cure the diseases of every man woman and child in a medium size emerging nation. 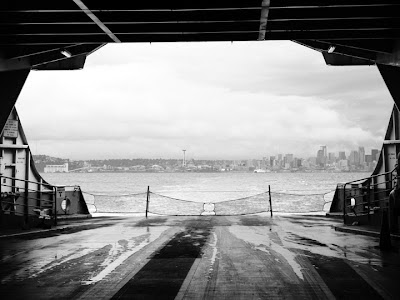 Seattle seen from the Bainbridge Ferry

We arrived at the airport at 6:45. Our flight was not until 8:20 so we were comforted by the amount of time we had to be subjected by any unforeseen disaster. We put one bag through but in case it got lost I packed two bags for mom. One with clothes and one with everything else we might need for the trip. David had a backpack and a computer bag, which I did as well. So we had six small bags and mom in the wheel chair. I call this traveling like Joe Duffey, who was my boss at the former USIA. When I started to work for him and we traveled he would pack two big suitcases and then carry a small one on board. I packed very little never put my luggage through. After a while he decided he should pack like me but instead of very little, he put a great deal in lots of small suitcases and usually, when we arrived anywhere two or three foreign service officers and diplomatic travel people would meet us but occasionally we were on our own and would wind up schlepping all the stuff by ourselves.

Then like magic Delores – a lady skycap - appeared pushing an airport wheelchair and asked if she could help. In my sleep deprived stupor I declined and then I remembered that was idiotic and I said “Of course, but can we keep mom in her own chair.” She thought that was fine and suggested she push mom and we put all the bags on the other chair. Delores was an angel. She took us right to the front of the security line, took mom through the line. (Except for a brief encounter with the crack security personnel who decided to body search her to see if she if this 86 year old disabled woman was carrying any bombs or weapons of mass destruction.)

We had over an hour so we went to the “Club” – where anyone who has an American Express Platinum card can go if you used it to buy the ticket – had a coffee -- and took a breath. Pretty uneventful so far.

Boarding the plane was a bit more exciting. We wheeled her up to the door and then had to walk on board. She can walk but is a bit unsteady. However, we had determined that we couldn’t fly coach so she was seated in the first class bulk head. Once on board, David renegotiated his seat, as did many passengers, and he sat right in back of us. This would have been more attractive had he not realized that without the change he would have been sitting next to Ellen Burstein. Oh well.

Breakfast was unappetizing but Mom, having been in rehab without a good meal for weeks, thought the croissant was terrific and put jelly on the tasteless cheddar omelet without any cheese. She had coffee and fruit and, of course, it was inevitable that she would have to go to the bathroom during a point in the trip when there was turbulence, the seat belt sign was on, and even the flight attendants were seated. It took both of us to get her up and into the bathroom and then, while she did her business, I waited inside with her so she wouldn’t lose her balance and tumble off the seat. When the turbulence subsided she was finished and the three of us made our way back to our seats. David was now sitting in my seat and I right behind them. 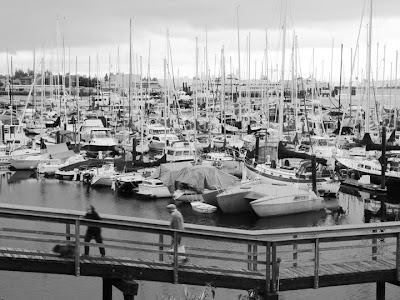 The Bainbridge harbour,filled with boats...

We had fresh baked chocolate chip cookies and coffee about an hour before landing and, although she looked very tired, she seemed to be comfortable and having a good time reading magazines, watching the movie and listening to music. She suggested going to the bathroom again but David talked her out of it and assured her there would be big clean bathrooms at the Seattle airport. David had started to film a bit of the adventure but then just moving got so complex he gave it up. Maybe in the next part of the journey, (the ferry to Bainbridge), with my brother and sister-in law, there will be more time for artistic endeavor. We’re just sayin....Iris
Posted by Iris&David at 12:41 AM

Travel is great when you get to the destination.

Have a good trip.

so glad you guys are there - call us when you have a minute. we love you all! hugs and kisses from Z (cuz they're the best!) love, joyce