It Must Be a Kibitka

Some years ago, and I am sorry we stopped, we would invite friends over to play Dictionary. There are quite a number of variations on the game but ours required only an enormous dictionary (one that has words you would never hear yet alone use, and weighs about twenty pounds) and a few players with good imaginations and the ability to keep a straight face. The rules were easy. The leader (which changed with every word), would look through the book, select a word, and write the definition on a small piece of paper. The rest of the players would hear the word and write likely definitions on paper exactly like the one used by the leader. All the definitions were written on like pieces of paper. Then the leader would read all the definitions in random order, and the players would select the one most likely to be the definition. If people picked your definition you would get a point. The scoring was not as important as the ability to imagine what a word might mean and craft the definition so it sounded plausible. It was great fun. And it could be played by anyone of almost any age or intellect—so it was family fun as well. 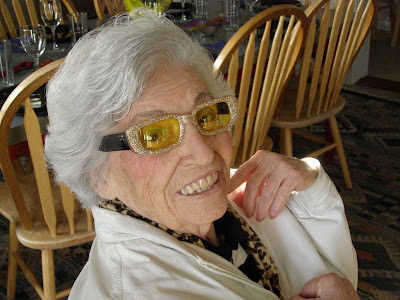 Oh, La La!
The most memorable definition from all the games we played was one I made up. It was an accident. The word was Kibitka. I thought the definition should be “a miraculous recovery”. Like when someone was dying or totally bedridden, you prayed for a kibitka, and they got out of bed and jogged around the house. It was like one of those Yiddish words that sounds like what it is. The real definition of the word is “a small canvas-covered Russian wagon” but whenever we describe something bordering on a miracle, we call it a kibitka. This is a long way to go to say that my mother has had a kibitka.

When last I wrote about her I was on my way back from Bainbridge thinking that I would never see her again. She was so weak and fragile. You may recall that a few months ago I asked God to give the mother I knew so well—and had mother –daughter issues with, back to me. Well folks it seems to have happened. I don’t want to give her a ‘kunahura’ that means I don’t want to jinx anything, but she seems to have had, as I just said, a kibitka. The day after we left Jeff and Els moved her into her new apartment. It is in, what is called, a retirement facility, rather than assisted living. And somehow that makes a difference in attitude. Her doctor in NJ as well as all the medical professionals in the rehab, said she would never be able to get out of bed unassisted and she would never be able to get up from a chair and use her walker. Well, once again, the Rose has proved them all wrong. Yesterday she got up from her chair—by herself, and used her walker to get to her closet and change her clothes.

Some of this has to do with the fact that she is incredibly stubborn and has never allowed anyone to tell her what she couldn’t do. But most of it has to do with the fact that Jeff and Els see her everyday. Jeff stops by and Els has tea with her every afternoon. She has therapy, goes to the movies, and plays bingo (which she admitted she hates) to have something to do. The people who run the complex are supportive and compassionate. They treat her like a person not just a tenant or an income producing entity. What a difference attitude makes. 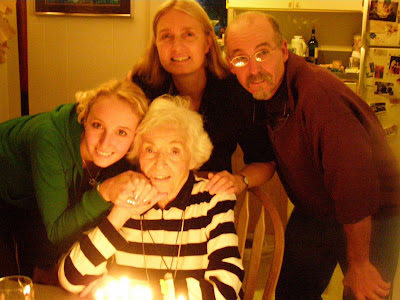 With Devin, Els and Jeff

Mom and Aunt Peppy, who moved to Massachusetts last Sunday, were 87 on Saturday. The twins, as we call them—it’s unlikely we would confuse them with any of their siblings since everyone else is gone, celebrated by lighting a cupcake and sharing a “happy birthday” by phone. It is terribly difficult for them to be separated by an entire country but when we asked them if they wanted to get two apartments in a Jewish assisted living facility, Aunt Peppy wasn’t ready and Mom didn’t want to live there without her. Actually, when we went to check out the place Mom asked a woman who was sitting outside how she like it and the woman said, “I’m the wrong person to ask”. So there was no way she was moving in without a pal. 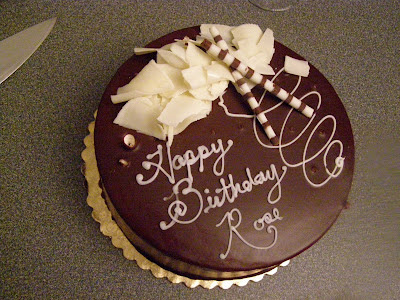 Who ever would have imagined that my mother would become a West Coast convert or chick, as they say. We have let her go so many times that we never thought she would ever be an independent spirit again. But, as she always says “Go, Know”. That means, who would have guessed in Yiddish shorthand. 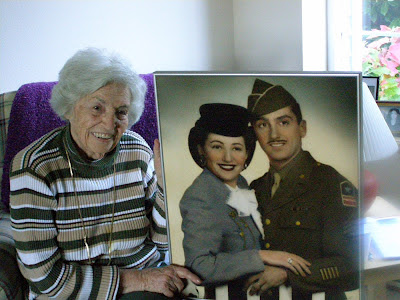 None of us have any idea how long this kibitka will last but she has assured us she will not have any more falls and she will ask for help when she needs it. And we have assured her that we will try to make her quality of life not only Ok but one with as much salt and pepper, and birthday cake, that she wants it to be. We’re just sayin...Iris
Posted by Iris&David at 11:50 AM

I see where you get the looks David likes SO much.

Mom and Dad 1942 where lookers back then. And I see why mom is a happy woman, Milton was quite the scene in that uniform!!!

Walt, who never wore a uniform